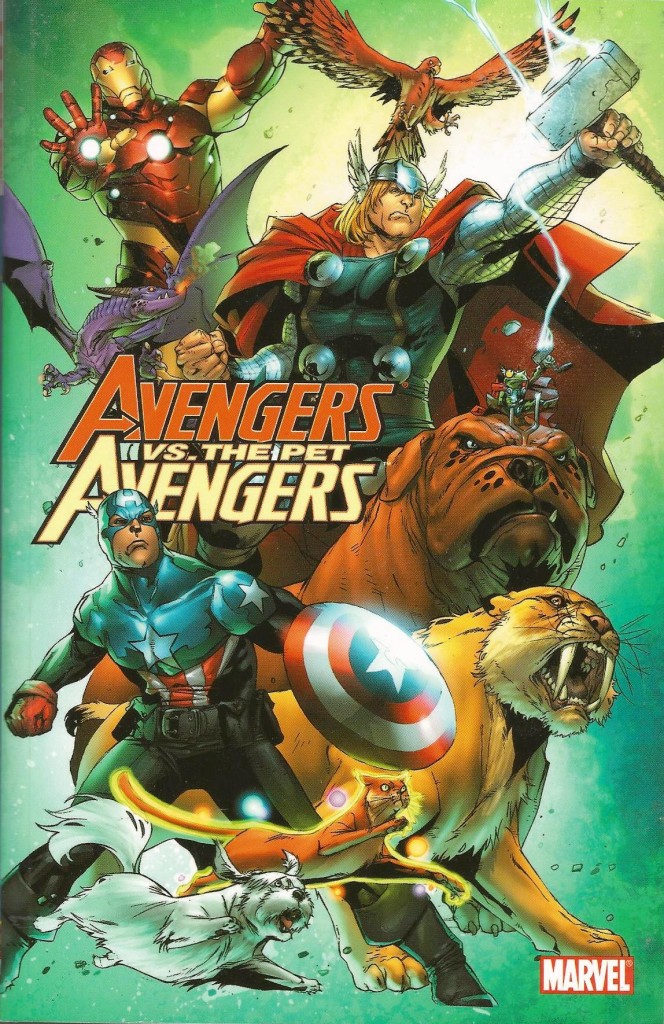 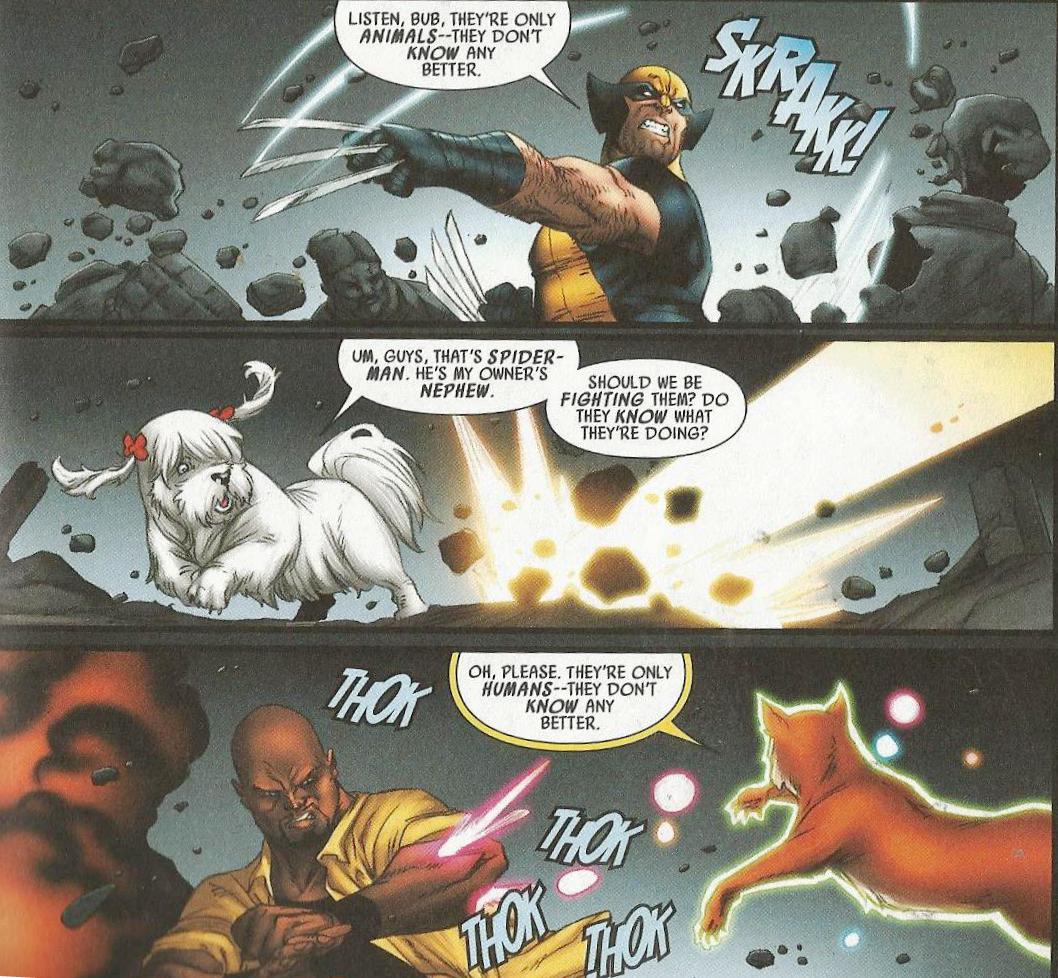 In the third gathering of Marvel’s heroic menagerie, our furred and feathered friends finally follow one of the longest-established traditions of the Marvel Universe – in a ‘heroic misunderstanding’, they have to take on their bipedal Avenging counterparts!

It doesn’t all quite kick off as quickly as that, of course. In the book’s opening sequence, our heroes – Lockjaw, Lockheed, Hairball, Redwing, Zabu, Throg and Ms. Lion – are well-established in New York, hanging about in Central Park, known to shopkeepers and residents, and protecting the neighbourhood from the depredations of small-time thieves and muggers. A bit of a comedown for a team that started their career by defeating Thanos, but everybody’s well contented until a telepathic summons from Thor brings Throg and his chums to a pacific island, where they encounter… three more frogs. Except that these frogs used to be Thor, Captain America and Iron Man. The three Avengers have been transformed into frogs by Fin Fang Foom – yes, the classic Kirby monster, enormous purple panties an’ all – to get them out of the way while Fin hatches his nefarious scheme. Unable to contact their human colleagues, the transformed Avengers use Thor’s psychic bond with Throg (boring backstory, never mind) to enlist the Pet Avengers – only for the heroes to be even more outnumbered when Fin Fang Foom’s dragon brethren awaken from a long slumber to form a dragon army, and one of the Pet Avengers sides with them!

Borrowing hugely from the classic Star Trek episode Devil In The Dark, this story eventually has a happy ending, with a ‘Pet Avengers Mansion’ being established out back of the real Avengers Mansion, as a thank-you to our animal heroes. But along the way, there’s action, adventure, the inevitable battle between the teams as the rest of the human Avengers roll up, and heartwarming comedy a’plenty courtesy of scripter Eilopoulos. The banter between the critters is charming; each has a distinctive personality, concisely established, putting Brian Michael Bendis’ interminable ‘decompressed’ padding in the ‘senior’ Avengers titles to shame. (“This issue in New Avengers! Luke Cage makes a cup of COFFEE!! While SHOUTING!!! And his wife shouts BACK! Next issue; the same damn scene from HER viewpoint, with a three-issue crossover to Secret Drinkers, which you don’t even BUY!!!!!”)

Ig Guara’s illustrations are fine and fun, though the overall tone (physical, rather than emotional) of the book is darker than it needs to be for easy reading, though of course that could be a production decision or a printing flaw rather than a conscious act on the part of the illustrator.

The back-up is a non-canonical, but still funny, three-way clash between a very young Spider-Man, the original ‘Frog Thor’, and Loki, God of Being A Bloody Nuisance, written and drawn by Eliopoulos.

After three acclaimed series, it was hoped that Pet Avengers would become an annual treat at Marvel, but sadly, the caped critters appear over the last couple of years to have gone into hibernation. One can only hope for a triumphant return.