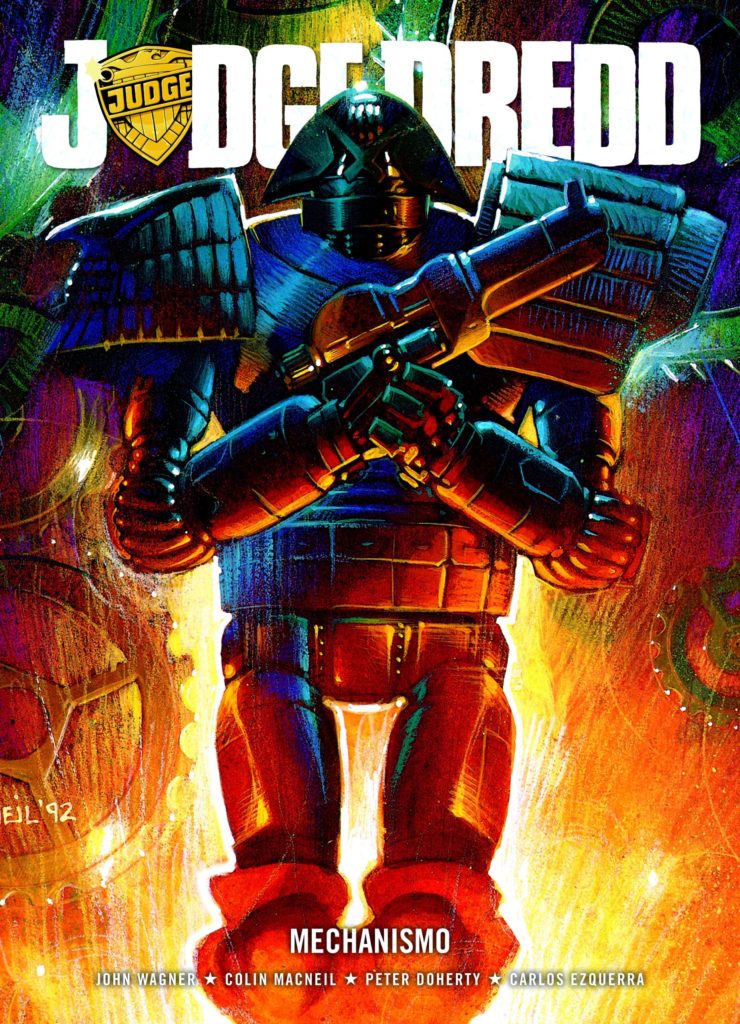 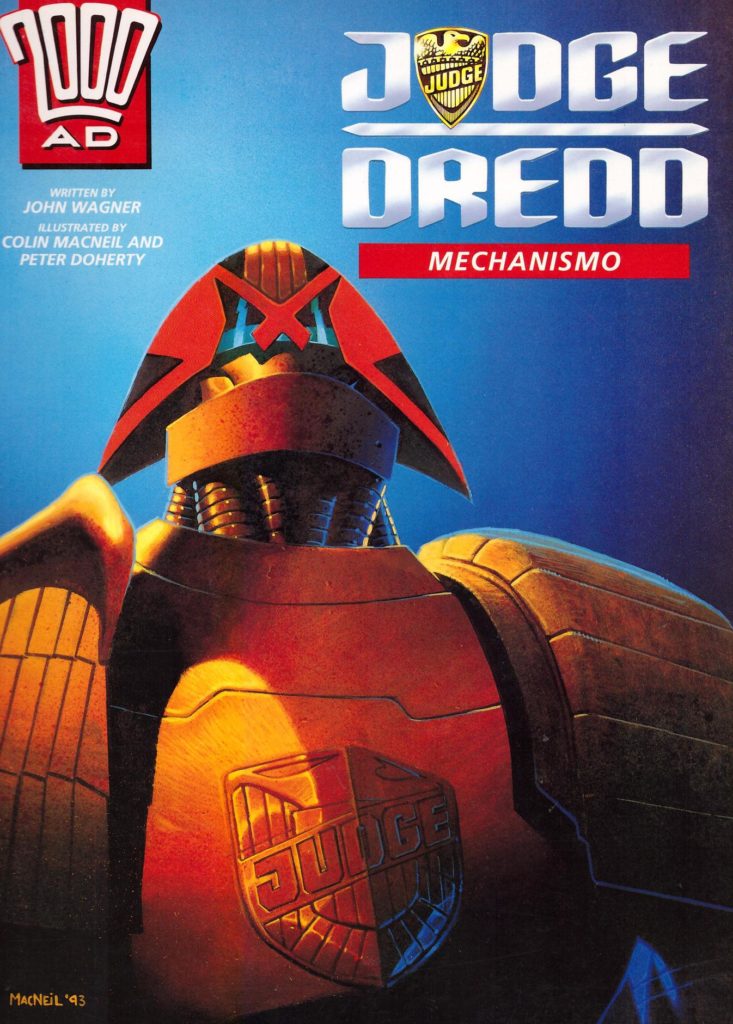 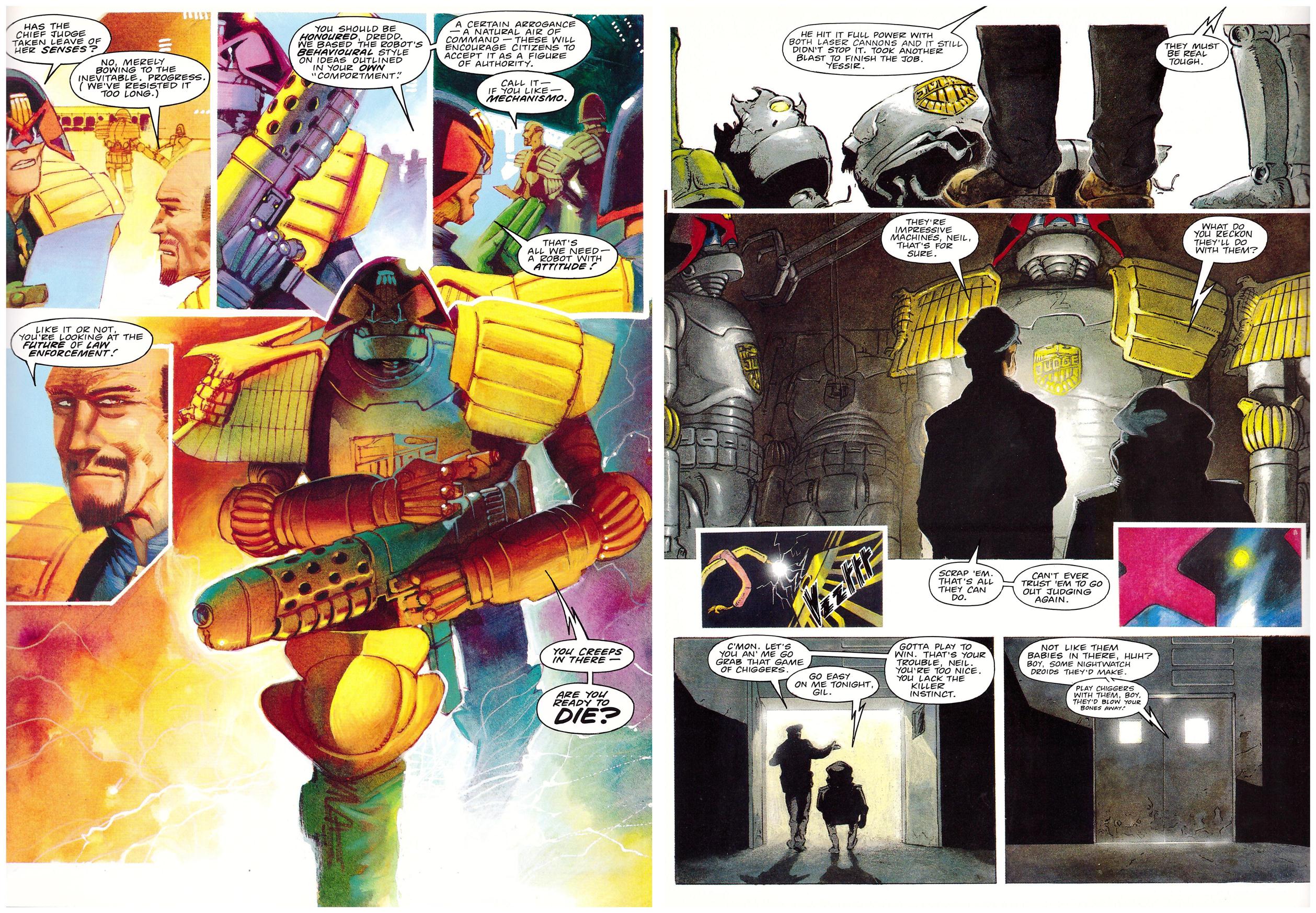 Reflecting its creator John Wagner, Mega-City One has never been a place short of imagination, so faced with a shortage of Judges an ideal solution would seem to be Robot Judges. If built to the proper invulnerable specifications and programmed with a full knowledge of the law, that’s the problem solved. What could possibly go wrong?

As seen by either of his covers, Colin MacNeil’s design for the robot judges is a gem, very much based on Dredd’s own look, but slightly exaggerated, and with the sheer power required to impose. Unfortunately, for all the work he put into the design and the cover painting, the interior isn’t anywhere near prime MacNeil art. It’s an ultra-simplified version of the style that made his name, with no great depth, barely any backgrounds and no great attention to personalities. The sample art is one of the occasional pages reminding what MacNeil can do, but there aren’t many. To provide some perspective, this was the era of a lot of poor painted artwork on Dredd and accompanying strips. Looking at what was considered acceptable, MacNeil must have wondered why his own standards were so high when he could be paid for doing far less and still be better than the surrounding strips. However, with the mediocre artists long forgotten and Mechanismo a Dredd landmark, his art disappoints.

Thankfully Wagner planned Mechanismo as a two act story, and Peter Doherty draws the second half. Then a newcomer, the raw talent is there, but he’s still grappling for a style and his influences shine through, some Brendan McCarthy here, some touches from Heavy Metal there, and the odd strange face or figure. Even taking that into account, it’s a bravura début on Dredd, with imaginative layouts and a surprising delicacy.

Wagner based the Robot Judges on Robocop, a character more than a little influenced by Judge Dredd, and Dredd himself vehemently opposes the idea of machines capable of upholding the nuances of the law, but he’s not in charge. Sure enough, it’s not long before their interpretation of the law is to the letter, going above and beyond. It’s Wagner’s hyper-exaggeration of Dredd’s world, where the Robot Judges are actually the perfect representation of that society’s ideals, or at least the ideals of the misguided ruling elite. It’s a linear piece allowing for the occasional funny set-up.

The original Hamlyn collection closes with another Wagner/MacNeil collaboration, the six pages of ‘The Man Who Killed Judge Dredd’. It’s a variation on the Black Knight scene from Monty Python and the Holy Grail, but strictly filler, and MacNeil again ordinary. However, as hinted at the end of the title story, Wagner wasn’t done with the Robo-Judges and there was a return, not very sparklingly illustrated by Manuel Benet. No wonder they preferred to credit Carlos Ezquerra on the cover of the reissue. That’s a shame, as Wagner’s story of a malfunctioning Robot Judge with an extreme personality is fun, if prolonged a little too far. It can also be found closing Judge Dredd: The Complete Case Files 19, with the original story gathered in Complete Case Files 18. Mechanismo Machine Law is a follow-up with modified robot judges.