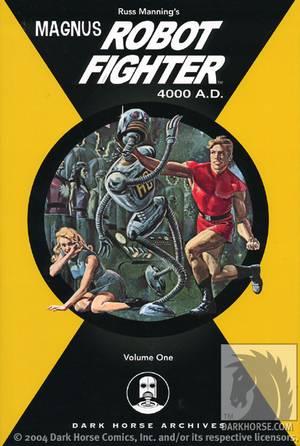 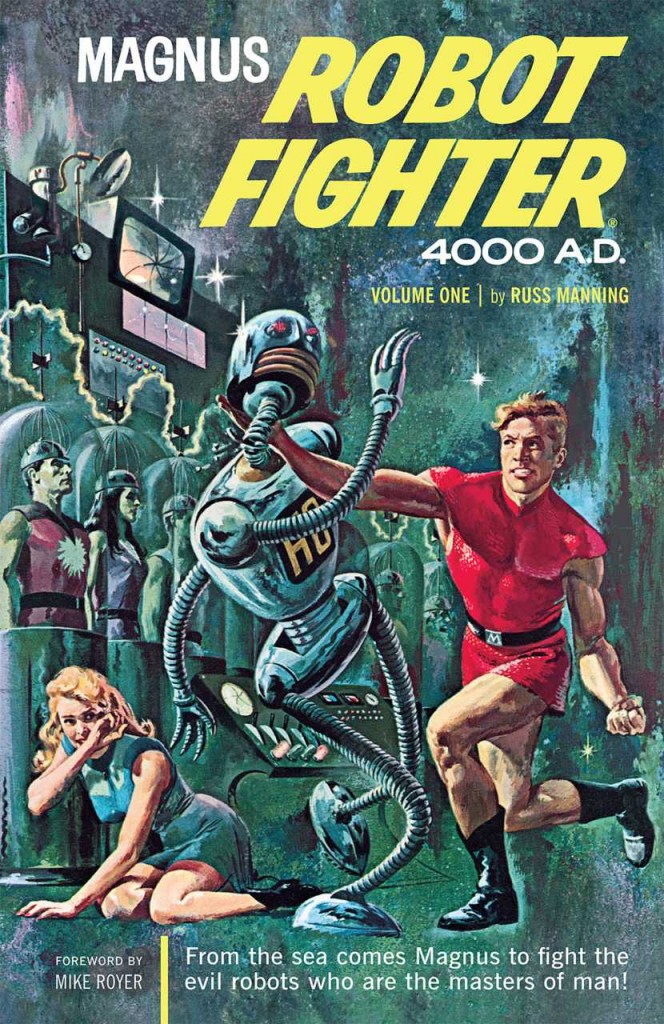 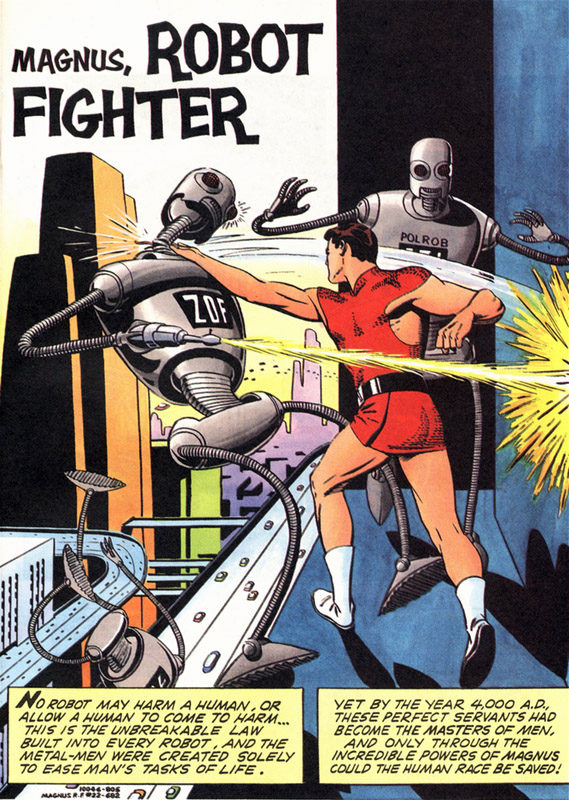 The first in a series of books collecting one of the crown jewels in the work of writer/artist Russ Manning. Primarily a modernistic updating of Edgar Rice Burroughs’ Tarzan (which Manning had also adapted for comics), the titular character is a man set loose in the Earth of the 41st Century. It’s a world where dependence upon sophisticated robots is gradually guiding humanity into a helpless stupor, and Magnus has been trained from birth to deal with the more problematical among these machines. He’s gifted not only with “steel-smashing strength”, but implanted with a device which allows him to intercept and interpret transmissions between robots. If Manning were alive, and writing Magnus today, he’d possibly make smart phones the enemy.

The stories represent an excellent last hurrah for the type of pulp science-fiction that stretched from the novels of E.E. “Doc” Smith in the 1930’s, to the works of Heinlein and Campbell and Hampson in the 1950s. In Manning’s worldview the 41st Century is an ultra-clean, neo-Things To Come megalopolis, predominantly populated by white people whose personalities almost burst with the benefits of the Euro-American Way.  It is to Manning’s credit that he elected to introduce a serpent into this Eden in the form of humanoid robots determined to serve humanity. So well, in fact, that the humans cannot feel the shackles being fitted around their necks; a nod to the writings of Jack Williamson. But, whereas Williamson saw little hope for redemption, Manning at least provided our species with a guardian angel in the form of Magnus: a two-fisted and canny hero straight out of the pulp tradition.

Also to Manning’s credit was the fact that his artwork was on a par with his vision as a writer. Dressed in a simple red tunic, Magnus fights his way through a landscape of enormous sleek skyscrapers and transparent lift tubes, the environment cleanly bisected by neat lines of flying cars engaged in orderly traffic patterns. Starships are clean polished metal teardrops, the clothing are flowing robes or neatly pressed uniforms, the furniture obediently relaxes on anti-gravity fields. No room for exposed rivets or litter in 4000 AD.

Written in an age before the advent of utilitarian automation, there’s a sort of charm in seeing the robots which inhabit the world of this series. As an example: rather than completely automating a spaceship, Manning has a robot pilot actually sitting before the controls. Robot warriors possess hands and fingers with which to manually (robotically?) aim and adjust their chest-mounted weapons. Such tender glamour would not be seen until years later, when George Lucas would take us to a galaxy far far away.

Along with the origin story, volume one introduces the reader to villains such as H-8, the tyrannical and scheming chief of the robot police; Xyrkol, self-styled master of the continent-spanning city of North Am, as well as the indestructible robot Talpa. Manning’s writing style was as clean and as simple as his artwork; his stories enviably easy to follow and understand, and it is this simplicity which help keep his material as fresh today as when it was originally created. Two further volumes follow. 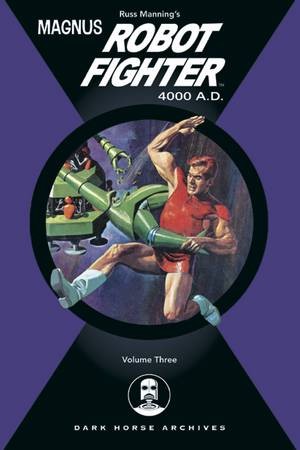