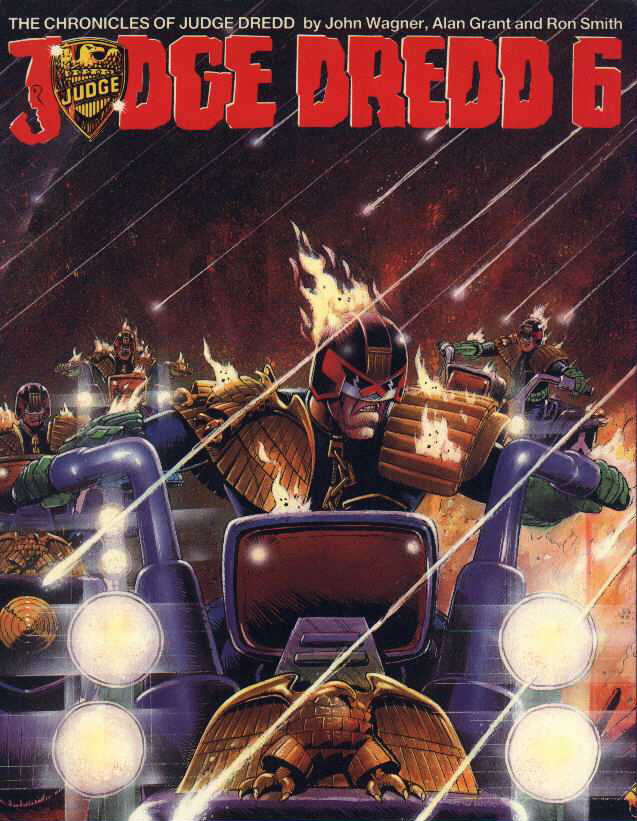 Ron Smith is the artistic focus for a second successive volume, little wonder given his prodigious output, but while his art is up to previously established high standards, this isn’t the best Dredd anthology. The problem is that writers John Wagner and Alan Grant revisit many previously used themes or topics, and while they’re generally adept at adding a new twist, this volume collects too many stories where that isn’t the case.

One of only two unqualified successes is the return of Otto Sump, the ugliest man in Mega-City One, this time pedalling Gunge, his processed food with legal, but stomach-turning ingredients. Wagner and Grant parody UK TV ads and jingles, and Smith draws up a storm.

The longest story at four chapters is ‘Shanty Town’, dealing with the refugee population accumulated outside Mega-City One in the wake of the Apocalypse War. While some Dredd stories have an undercurrent of extremely dark humour, rarely are they as overtly bleak as this opening chapter. The refugees routinely sell body parts to organ leggers in order to survive, and when unable to divest themselves further resort to selling their children. The judges’ initial solution is to force the refugees into the radioactive wasteland beyond the city. Three further chapters spread the plot too thinly.

Several other stories feature a gathering of mob bosses attempting to conceive a method of circumventing the efficiency of the judges. One plan involves impersonating them, another calls for Dredd’s assassination, but the most inventive depends on persuading the citizens of Mega-City to erase all distinctive features. Called ‘Blobs’, the resulting blankness is quite the sinister effect. It’s an ingenious story with an ingenious solution.

Smith devises some fearsome robot hounds for the otherwise ordinary Rabid, and the volume closer is a long chase sequence in which a perp compounds his initial misdemeanour. Complete with hard man quip at the end, were it not for the clarity of Smith’s art it might have dated from Dredd’s earliest days. The next volume collecting Smith’s stories is 8, and far better.