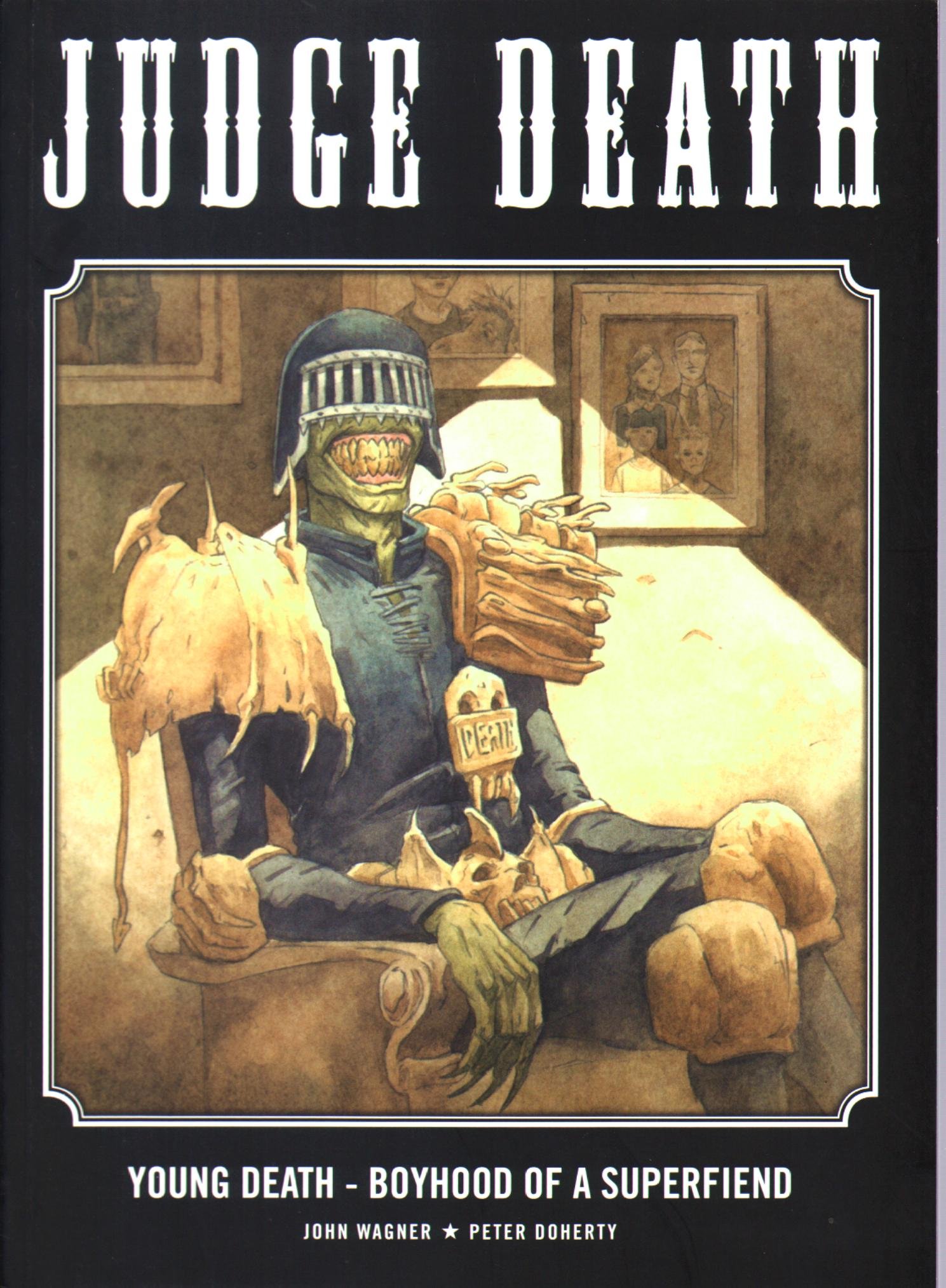 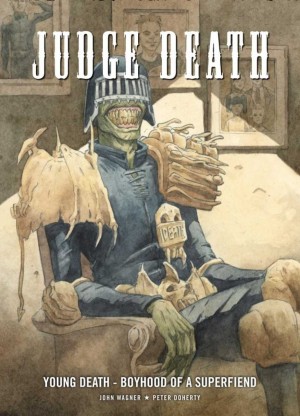 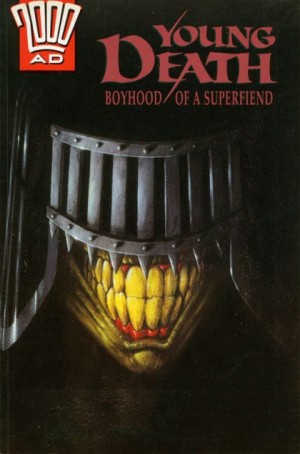 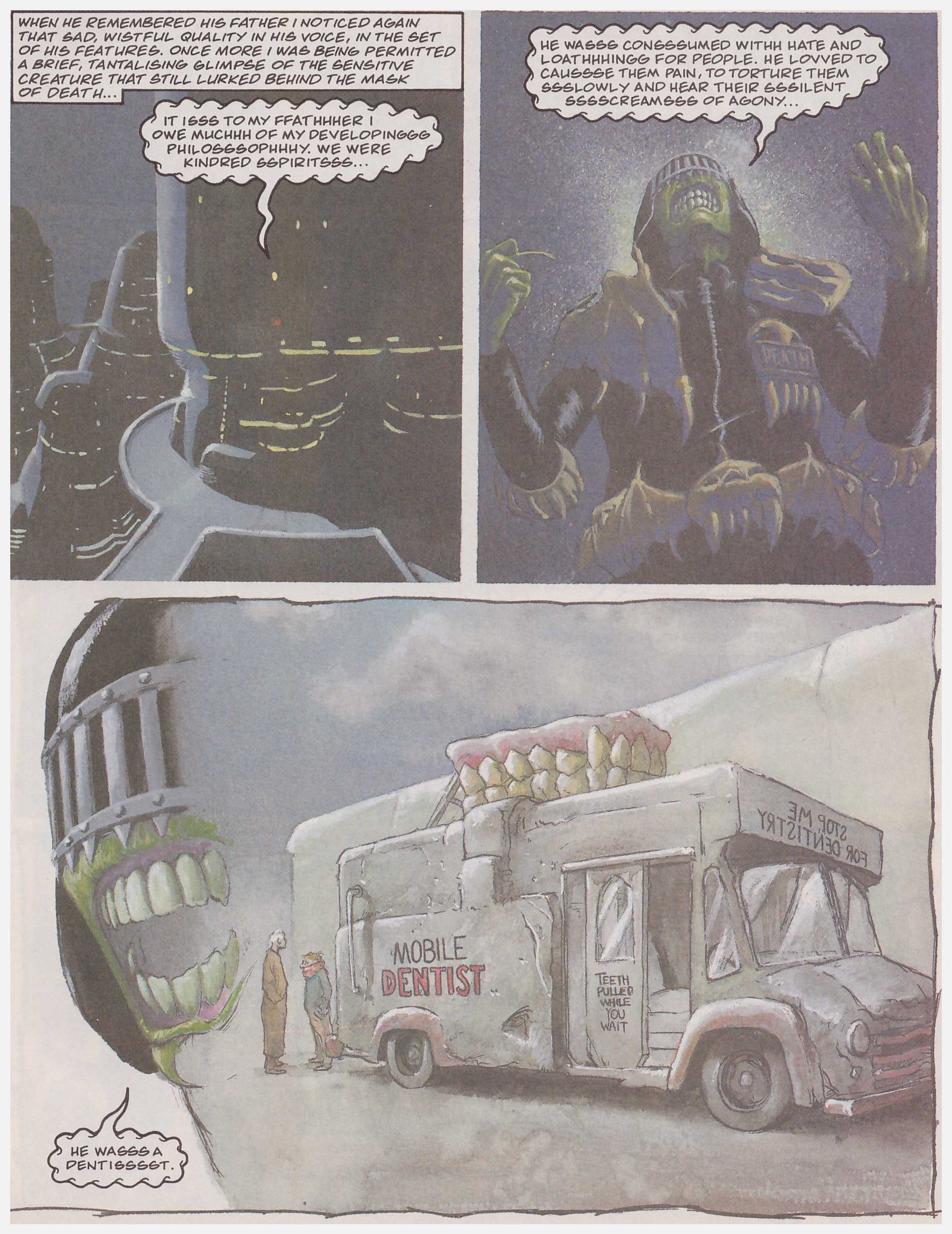 When industrious young reporter Brian Skuter places an advert requesting citizens of Mega-City One relate their stories to him, he certainly didn’t expect a response from the notorious Judge Death, scourge of the city, holding a belief that the only way to eradicate crime is to eradicate life.

Death is ensconced in a small apartment with a dottery, half-blind landlady Mrs Gunderson, who refers to him as “that nice Mr D’Eath”, oblivious as to what’s occurring around her.

Writer John Wagner combines two simultaneous narrative strands. We see Judge Death relating first how he survived Necropolis, then the story of his youth to Skuter. These recollections are contrasted with the Mega-City One Judges investigating Skuter’s death.

Wagner’s obviously enjoying himself, his dark humour seeping through on most pages, from Death’s sibilant hissing dialogue, his threatening manner of keeping Skuter in his place when he becomes over-confident, to his sadistic childhood activities. And who else would name the infant Death Sidney? The blackest chapter is Death’s first day sentencing individual cases in the manner of a court judge. Loitering? Death. Wasting court time? Death. Justified in all cases as total rehabilitation. The story works, though, as this isn’t just comedy. There’s the constant undertone of threat via the foreknowledge of Skuter’s fate, and some viscerally horrific moments as Death graduates into the demented skeletal figure that eradicated all life on his world.

Peter Doherty these days restricts himself to colouring, and that’s a shame. Although he’d improve on this early painted artwork, there’s a solid foundation, and he plays the scenario completely po-faced. There’s a well cultivated air of all-pervading sombreness and decay to his pages, with Death surrounded in a miasma of gloom even within his comedy lodgings.

When originally serialised and collected by Mandarin in the 1990s this was just titled Young Death: Boyhood of a Superfiend. That original collection also omits ‘Masque of the Judge Death’, a black and white bonus strip. John McCrea’s experimental art makes deft use of light and shade, saturating his pages in black, while Si Spencer’s riff on the Edgar Allen Poe tale pastiched is adroit. One Vincente Prospero holes up in a large apartment to celebrate with all kinds of illegal substances, but one of his costumed guests has a surprise… 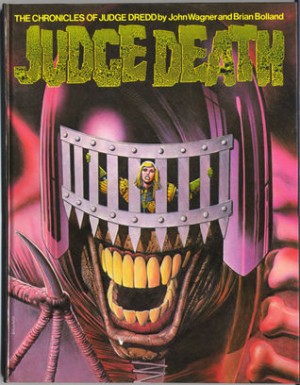 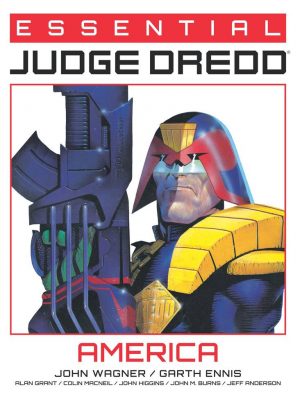