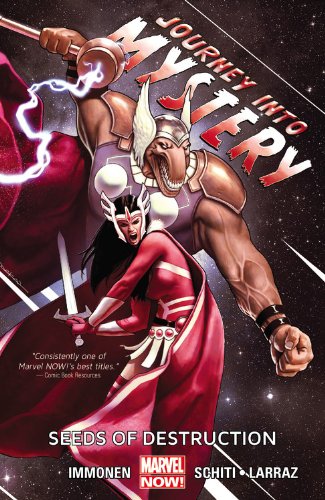 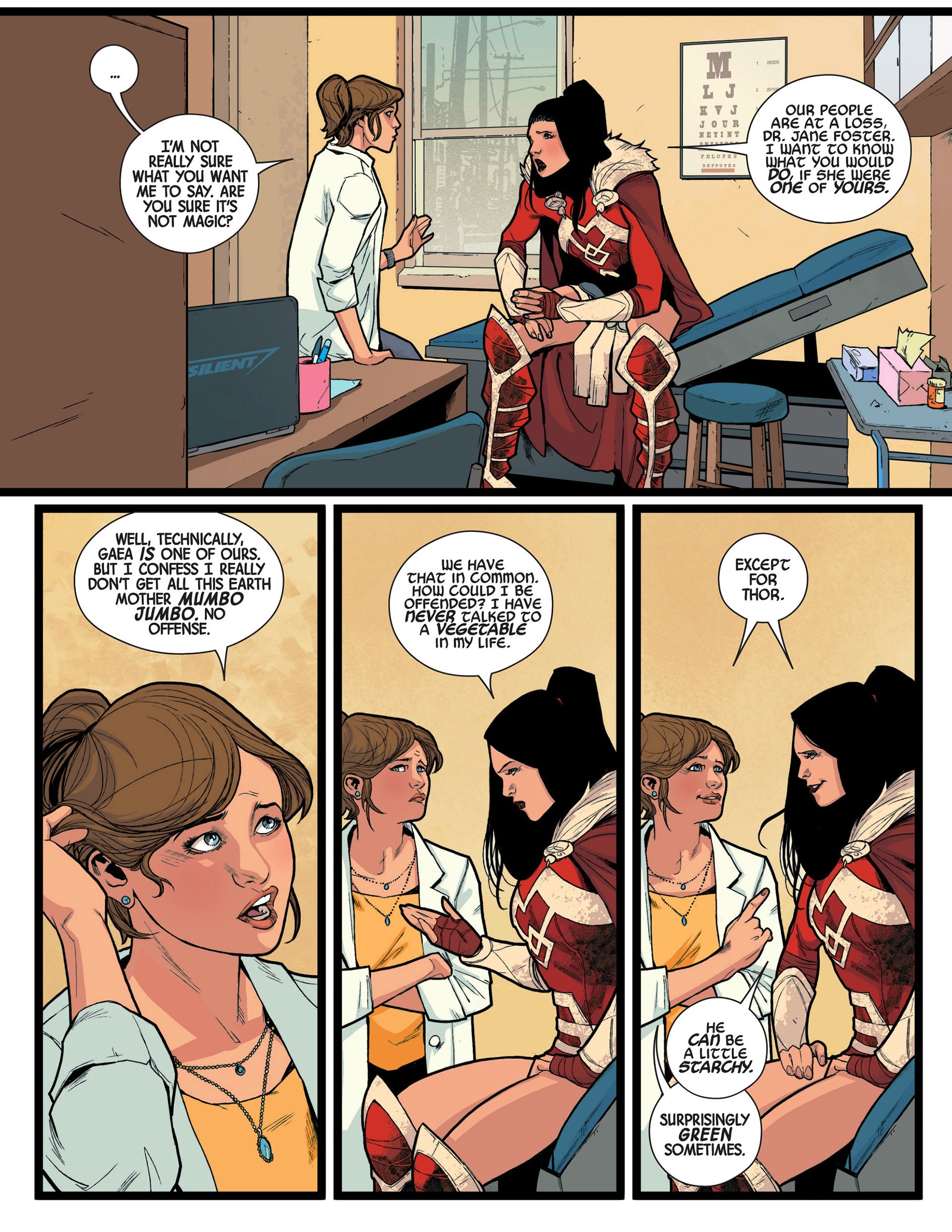 Marvel followed the delightful Midgard/Asgard based adventure that formed the delightful introduction of the Lady Sif as a credible solo star in the previous volume Stronger Than Monsters by taking Sif out into deep space for a more science-fiction themed jaunt.

First, though, we have an interlude on Asgard, guest illustrated by Pepe Larraz. Hilde, daughter of Volstagg and Gudrun, has an unnerving encounter with Fenris (giant wolf). Sif, Thor, Fandral, Hogun and the family Volstagg (anybody else think an animated sitcom, The Volstaggs, sounds like a goer? No?) are all involved, in a charming tale showing the reader, rather than telling them, the close bonds between our favourite ‘God Squad’.

We then move on to the main event; Gaea, the embodied spirit of all green life on Midgard (Earth to us mere mortals), is sick, and the threat of her passing threatens everything. When earthly cures fail Sif’s gaze turns to the skies. Sif enlists the aid of Tony Stark, and the Avengers’ Deep Monitoring Station, praying that Gaea’s malaise can be identified with the resources there. A period of quiet contemplation and research proves to be beyond our heroine’s grasp, as in short order she is joined by her donkey-faced old flame, the cosmic adventurer Beta Ray Bill. crashing – literally – back into her life. Not only does Bill have his annoying sentient ship, Skuttlebutt, in tow, but also his new, yet dying, lover, Ti Asha Ra. Talk about your awkward situations.

While not quite up to the standard of Stronger Than Monsters, this remains a rollicking read, with Sif becoming, in the readers’ eyes, far more than just the strong sword arm we’ve known her as. A courageous and indefatigable warrior, of course, but also a warm, passionate and compassionate person with an admittedly short temper, but a good sense of humour and a firm grasp of her own shortcomings. Kathryn Immonen  has achieved a huge amount with the character in a scant number of issues. A triumph is Sif and Thor’s ex, Jane Foster, starting to get along and swap stories, a prospect to make even the God of Thunder quail.

Valerio Schitti’s artwork goes from strength to strength, dynamic, forceful and imaginative, with narrative function enhanced, rather than stifled, by the setpiece shots.

All of which begs the question – why did it fail? Baffling. Perhaps it was somewhat impeded by the fact that, unlike virtually all of the “Marvel Now!” relaunch, it wasn’t accorded the sales spike of a new number one, but instead continued Journey Into Mystery’s traditional numbering, but that alone can’t account for it. As it is, the short run of Journey Into Mystery starring Lady Sif, collected in its entirety in these two slim volumes, seems destined to remain one of comics’ best-kept secrets.