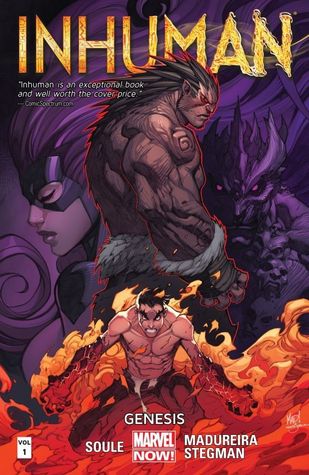 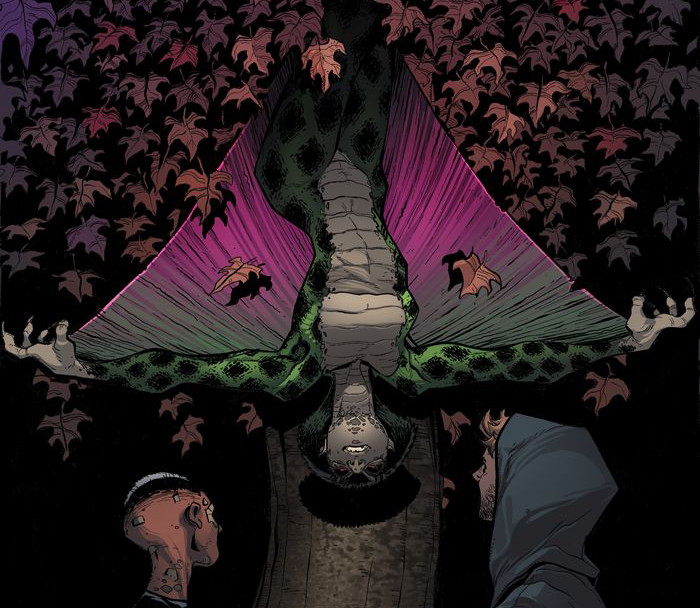 “Inhuman is an exceptional book and well worth the cover price”, reads a quote splashed across the cover. May we beg to differ. Inhuman is a moderately pleasing book, and would just about be worth the cover price Marvel used to charge before deciding there should be little difference between the cost of several individual comics and the book that eventually collects them.

For most of their published history the Inhumans have been a secretive and isolated society with an advanced culture. On reaching puberty their children enter a chamber and emerge transformed with an ability matching their personality to some degree. The active agent is the Terrigen Mists, a chemical compound that reacts with genetically specific people. Except now it’s been released to float around the world affecting those with Inhuman genes that might have otherwise avoided the transformation. For those wanting to investigate further, this occurred in Infinity.

A dreary series of narrative captions relate how presumed dead ruler Black Bolt had restricted the Terrigen, as a youngster named Dante basically becomes the Human Torch at the same time as his mother dies. He represents the transformation of thousands of NuHumans around the globe as the traditional Inhumans, now led by Medusa, attempt to recruit the new converts before they ally themselves with the villainous Lash. He’s already been successful in gathering a group of teens.

If this sounds to you a variation of a plot run regularly in X-Men, you‘d possibly be correct. The speculation regarding this mish-mash is that despite publishing the comics, Marvel doesn’t maintain the rights to the lucrative X-Men movie franchise, and they’d like to construct a similar concern. Hence Inhuman. The first three chapters are even illustrated by Joe Madureira in his mangaesque bigfoot style, just like he drew X-Men years ago, except with fewer backgrounds.

All this might pass muster if the end result contained any element of imagination or originality. The entirety can be summed up by dear Dante. He has flame based powers, so he’s code-named Inferno. If you think that’s clever, rather than desperately contrived, Inhuman may be the series for you.

But wait. That’s only the halfway point. Ryan Stegman is far more impressive artistically, his progression welcome and startling. When he comes on board Medusa has been convinced a great threat approaches, and this will require more Inhumans to combat it, explaining her integration campaign to locate them. It’s delayed by the arrival of an extremely powerful and despised former Inhumans ruler known as the Unknown. This sequence is far more interesting, and at least hints at the writer Charles Soule has proved to be elsewhere, and the book ends on a shocker and a cliffhanger picked up in Axis.