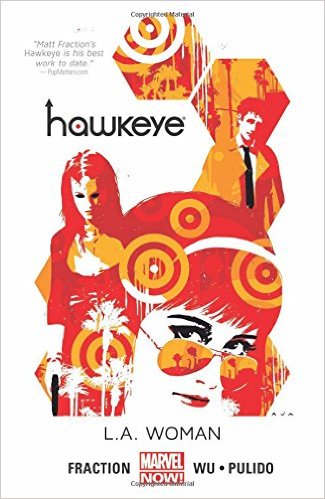 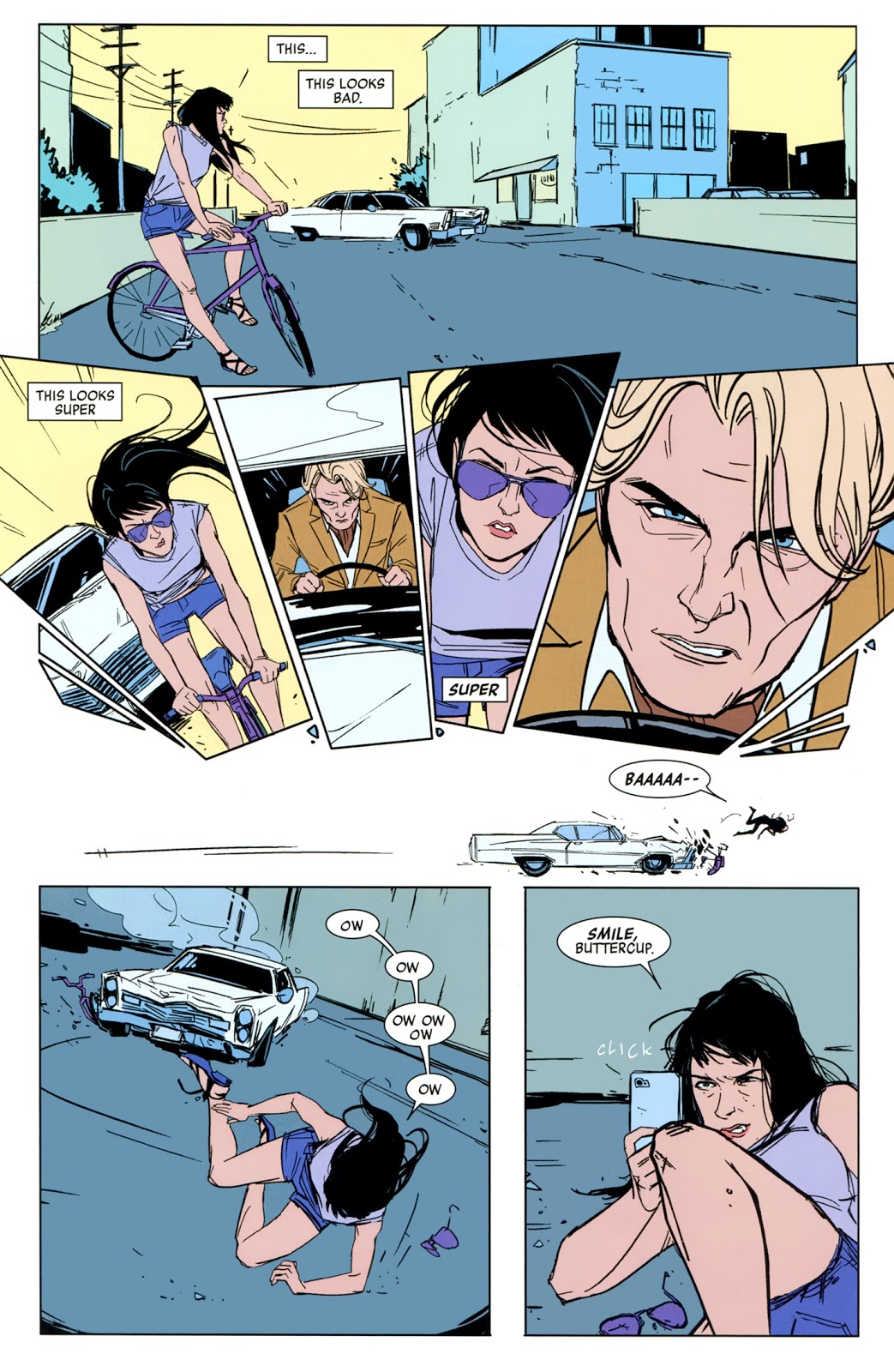 L.A. Woman follows the continuing adventures of Clint Barton’s protégé, Kate Bishop, as she relocates to Los Angeles to escape her mentor and establish herself. Javier Pulido returns to follow up the Madame Masque storyline from My Life As A Weapon, and the art duties then transfer to Annie Wu whose input to that first volume worked so well. Neither artist experiments with the layout and storytelling acrobatics in the way that David Aja does, but each brings excitement and vivacity to their tales. Credit must be given to Matt Hollingsworth: while the series has flitted between artists, his colouring has been tonally consistent and brought a degree of visual harmony to the run, based on a palette he developed with Aja.

There is an infectious perkiness to the character of Kate Bishop, a formerly spoiled brat finding her way in the world, but this perkiness is never allowed to become alienating as the character avoids slipping into hipster tweeness. Fraction clearly enjoys writing her and creates a sweetly antagonistic relationship with Madame Masque who Kate had previously knocked out, impersonated and humiliated. In many ways, Madame Masque represents the spoiled, selfish, arrogant brat part of Kate’s nature that she left behind in growing comfortably into her hero persona.

As ever, Fraction peoples the comic with an interesting supporting cast, from the reliable gay neighbours to Kate’s new mentor, Harold H. Harold, a gumshoe journalist resurrected from Tomb of Dracula.

The nominal idea holding the book together is that a poverty stricken Kate naively opens an unlicensed detective agency. This allows Fraction to have fun cleverly interweaving  stories of Brian Wilsonesque geniuses, stolen orchids and characters mysteriously de-aging. Despite Madame Masque’s best attempts to derail Kate’s L.A. adventures, the fledgling Hawkeye emerges as a more rounded, if still flawed, character whose natural heroism means that she must help anyone in distress.

The parallels between Kate Bishop and Clint Barton are drawn out all the more and, despite being on opposite coasts, reinforces the bonds between the two Hawkeyes. Despite the total lack of Clint Barton in the book, this still proves to the an essential volume of Matt Fraction’s run on Hawkeye and its terrific spotlighting of Kate shows her  more than able to carry a book on her own.

This series concludes with Rio Bravo, or can be purchased as a complete package in the Hawkeye by Fraction and Aja Omnibus.