Fantastic Four: In Search of Galactus 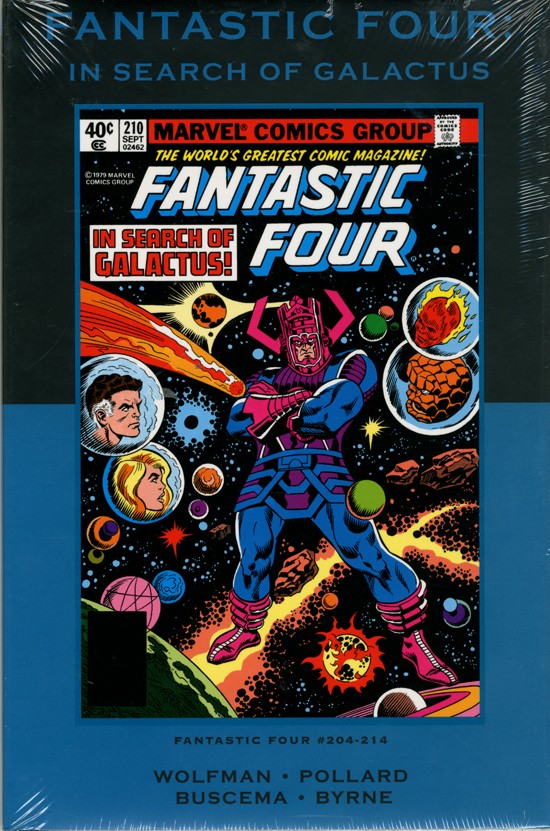 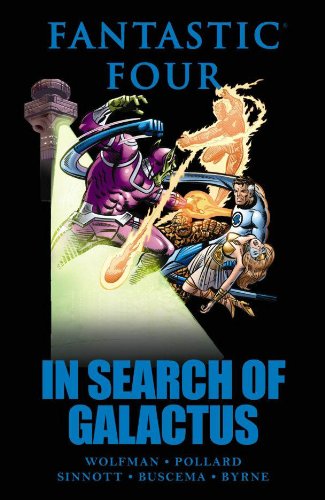 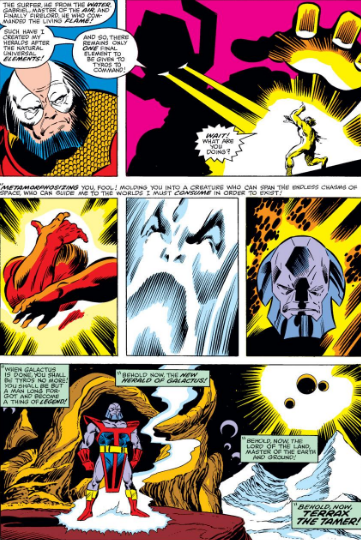 This continues from Reunited They Stand, and like that, it’s not the Fantastic Four’s finest hour. Collecting comics originally published in 1979-1980, In Search of Galactus doesn’t stand up to earlier stories featuring the World-Devourer, such as his debut in the 1960s or Thor’s quest for his origins. Instead, it is of interest primarily for two things: it includes the first work by John Byrne on Fantastic Four; and it is a prime example of how dire FF had become by the 1980s, and why the revamp that Byrne produced a couple of years later was so necessary.

There’s actually quite a lot going on of importance in the wider Marvel Universe, but it’s all so dull. Marv Wolfman rounds up plot threads from his cancelled Nova series, including introducing the home planet of the Nova Corps, Xandar. Xandar is attacked by Skrulls, then rescued by the FF and Nova, the latter accompanied by his rogues galley. The Sphinx, one of those villains, interfaces with Xandar’s living computers to become ultra-powerful and ultra-insane. The FF decide that the only way to beat him is to call in Galactus (well, of course you would) and deal with the latter’s desire to consume the Earth later. Along the way three of the FF are zapped by a Skrull aging ray (because apparently just killing them would be too easy), the Human Torch has a silly adventure with Spider-Man that seems contrived solely to keep him away from the aging ray so he can save the day later, and Galactus acquires a new Herald, Terrax.

Wolfman was once a good writer, on, for instance, The Tomb of Dracula, and he would be again, on New Teen Titans, but here there’s little enthusiasm. Never mind the daft cosmic plot – the dialogue is atrocious. The Thing in particular turns into a walking set of clichés, with a contractually-imposed deployment of “It’s clobberin’ time” at least once an issue. The Skrull emperor  says things like “I want those worlds decimated before dinner tonight!” as if that wasn’t utterly ridiculous.

The artwork isn’t brilliant either. Three pencillers are involved, Keith Pollard, Sal Buscema and Byrne, but the style owes most to the finishes of Joe Sinnott (Byrne is sometimes credited merely as ‘layouts’), who by this point had been inking FF for fifteen years. Sinnott had a lot to do with the impact of Fantastic Four at its cosmic height in the 1960s, but by this point he was past his prime, and was not as sympathetic an inker for younger artists as he was for Jack Kirby, or as younger inkers such as Terry Austin were for the likes of Byrne. The artwork therefore often looks bland. That said, things do improve when Byrne comes on board, and the appearance of Terrax is a good display of Byrne’s design skills, although Byrne seems not to have liked the character much. When he brought him back a couple of years later it was to get rid of him permanently.

There’s very little to recommend this collection. Byrne completists would be better directed to the first omnibus volume of his FF work, while FF fans might want to pretend that this never happened.