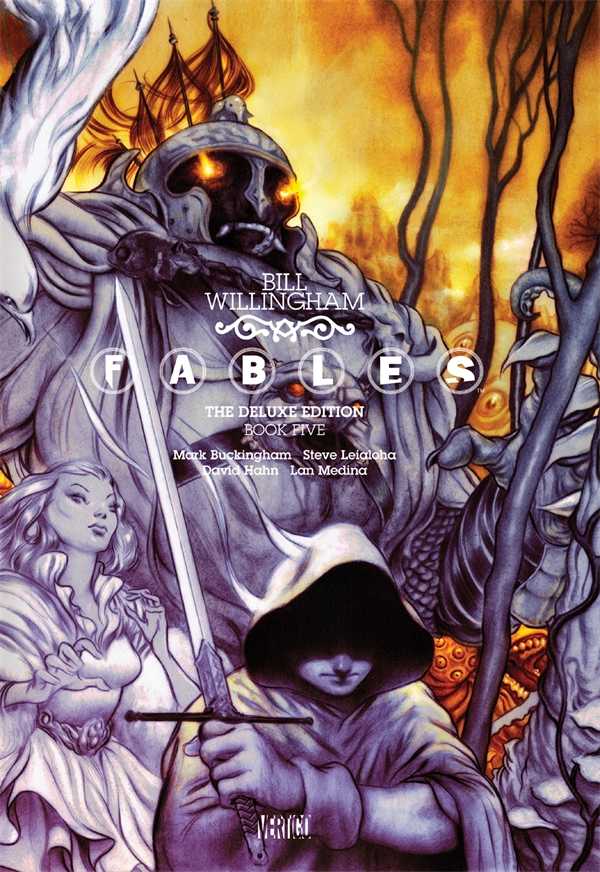 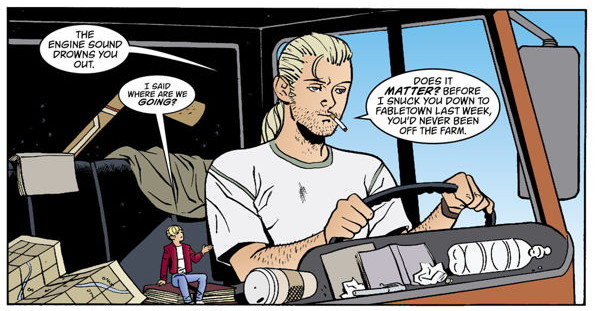 If there’s a single volume highlighting the best of what’s to be found in Fables, this is it. It gathers the entirety of the Eisner Award winning Homelands collection, one of the very best, and the title portion of Arabian Nights (and Days). Both build slowly, but become seat of the pants thrillers where the pages can’t turn fast enough. The frustration of reading these stories on their original monthly publication schedule can only be imagined.

The opening is relatively restrained, focusing on Jack, whose latest plan is to head off to Hollywood and finance a movie of his exploits. It’s drawn by David Hahn and very much emphasises the whimsical side of writer Bill Willingham, whose obviously had dealings of his own in Hollywood. Jack may be a devious and manipulative shit, but in Hollywood he’s strictly amateur hour.

In the previous volume it was reported Boy Blue had taken some magical artefacts and disappeared, and ‘Homelands’ follows his progress since. Having learned that his long lost love Red Riding Hood may still be alive he’s crossed back to the Homelands and is working his way through the assorted worlds attempting to locate her. It’s surprising how adept he becomes at the use of the items at his disposal and his success overall. His mission has another purpose besides, and by the end of the story those who’ve not already guessed are aware of the Adversary’s identity. It’s one of the very best Fables stories, excellently illustrated by Mark Buckingham as usual.

Of particular interest are the people seen along the way and how they entwine both here and later with the greater narrative. The most impressive introduction is the Snow Queen, illustrated with a cool allure by Buckingham, belying an evil heart. She’ll return later, as will Muddlecock, a particularly analytical administrator, who’s rewarded for discerning a pattern of events that have a consequence.

There’s an interlude detailing Mowgli’s visit to Fabletown, and he’s given a mission by Prince Charming with an incentive dangled before him. As Mowgli visits, it’s revealed how the Adversary is being supplied with information from within Fabletown.

To this point the Arabian Fables have remained unseen in the main continuity, although those only reading these deluxe editions will have encountered some in the previous volume. Sinbad leads a diplomatic mission accompanied by a particularly grouchy vizier particularly keen to take offence at any minor breach of protocol. It enables the well-conceived return of a character who appeared to have been discarded, and a step into the limelight for Frau Totenkinder, who heads the witches and warlocks of Fabletown. The Arabian Fables are accompanied by a Djinn, likened here to the equivalent of strolling into the United Nations with a nuclear bomb.

In both longer tales Willingham plays to his strengths throwing in very clever twists that, even forewarned, most readers won’t see coming. It’s brilliant stuff. 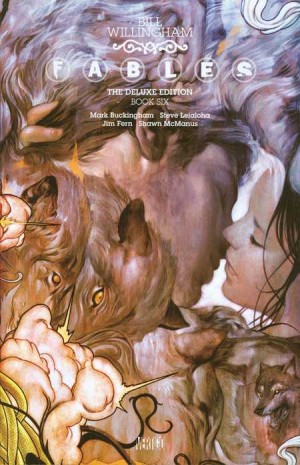 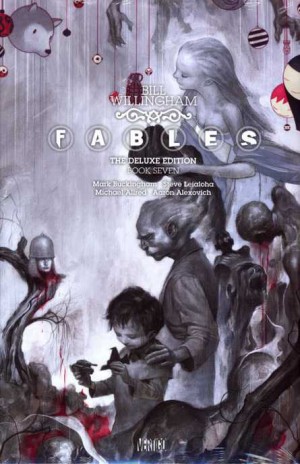 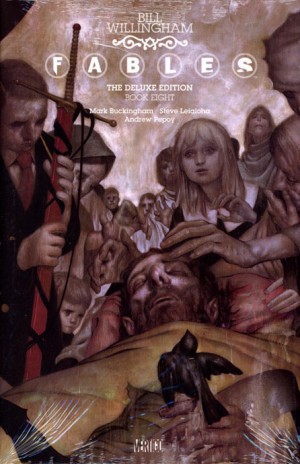