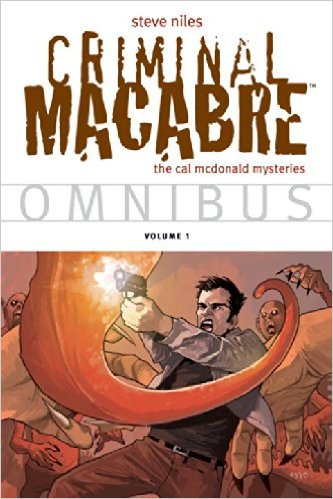 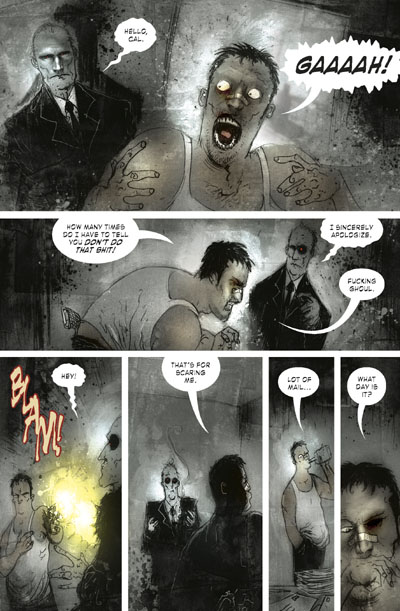 Steve Niles is a prolific writer, in just over a decade producing enough Cal McDonald stories to fill three omnibus volumes. Credited with making horror comics popular again, Volume 1 is a showcase of his work with 30 Days of Night collaborator Ben Templesmith and artist Kelley Jones. Most of the tales are private detective Cal McDonald and ghoul partner Mo’lock’s earlier outings for Dark Horse. Criminal Macabre is packed with grotesquely funny, stomach-churning gore as Cal pops pills, downs booze, makes acerbic observations, and dispatches vampires, zombies, werewolves and all other supernatural threats to mankind with amazing and amusing creativity. Cal specialises in the weird, the freaky and the unnatural. Able to perceive the supernatural realm as easily as we can see our own, he believes the stories the police won’t and defends mankind against these evils.

In Criminal Macabre: A Cal Macdonald Mystery, Cal investigates a plot to introduce a plague that will return the world to the glory days when monsters ruled and were nearly indestructible. Ben Templesmith’s messy abstract art was a game changer for the horror genre, and here it creates a sinister atmosphere where the environment deteriorates as the violence escalates. Niles introduces us to Lieutenant Bruegger, Sabrina Lynch and various other minor characters that feature regularly for the first few books, some playing key roles in the series and Cal’s character development.

Niles and Templesmith follow on with ‘Love Me Tenderloin’, a story not previously published in paperback. Brueger calls on Cal to help investigate a strange case at an abattoir involving a tormented spirit, a former lover, a shady property magnate and a whole helping of freshly slaughtered meat. It is a tender story (pardon the pun) mixed with heavy doses of treacle black humour, a proper gore fest and possessing a grimy scariness.

Short story ‘A Letter from B.S.’ has Cal travelling to Vegas to help a ghost named Benjamin Siegel re-unite with his love. Again, it’s tender, though less funny which shows that Niles can be serious when the plot demands.

Last Train to Deadsville is drawn by Kelley Jones, the illustrations very different to Templesmith. Jones’ style works for this darkly funny and highly irreverent story of a road trip with Cal’s on/off girlfriend reporter Sabrina Lynch, demon-possessed country hicks, and a powerful succubus controlling a town’s men. The art is cartooning yet creepy, but the material is adult and not for the easily offended. This is also the weakest story of the bunch, Niles spending more time on inappropriate humour than on solid storytelling.

Supernatural Freak Machine is a return to form, if not quite the standards of the opening story, with a send-up of classic horror stories like Frankenstein and Stephen King’s Christine. Jones’ art is superbly macabre, able to make you squirm and definitely not for the squeamish. Niles’ plot meanders too much in the middle when introducing new characters (Spivey is appreciated more in later stories), taking away the focus from the fantastically maniacal Dr Polynice and plot developments essential for the next part of the series. When it gets back on track, the story becomes compelling, and dabbles with all sorts of difficult moral questions. The dark sense of humour is still there, but tempered by tragedy. Niles’ writing and Jones’ art come together here, angst and pain well expressed.

Digital editions are good value for money while paperback editions are pricier and harder to obtain. The madcap adventures continue in Criminal Macabre Omnibus Volume 2.