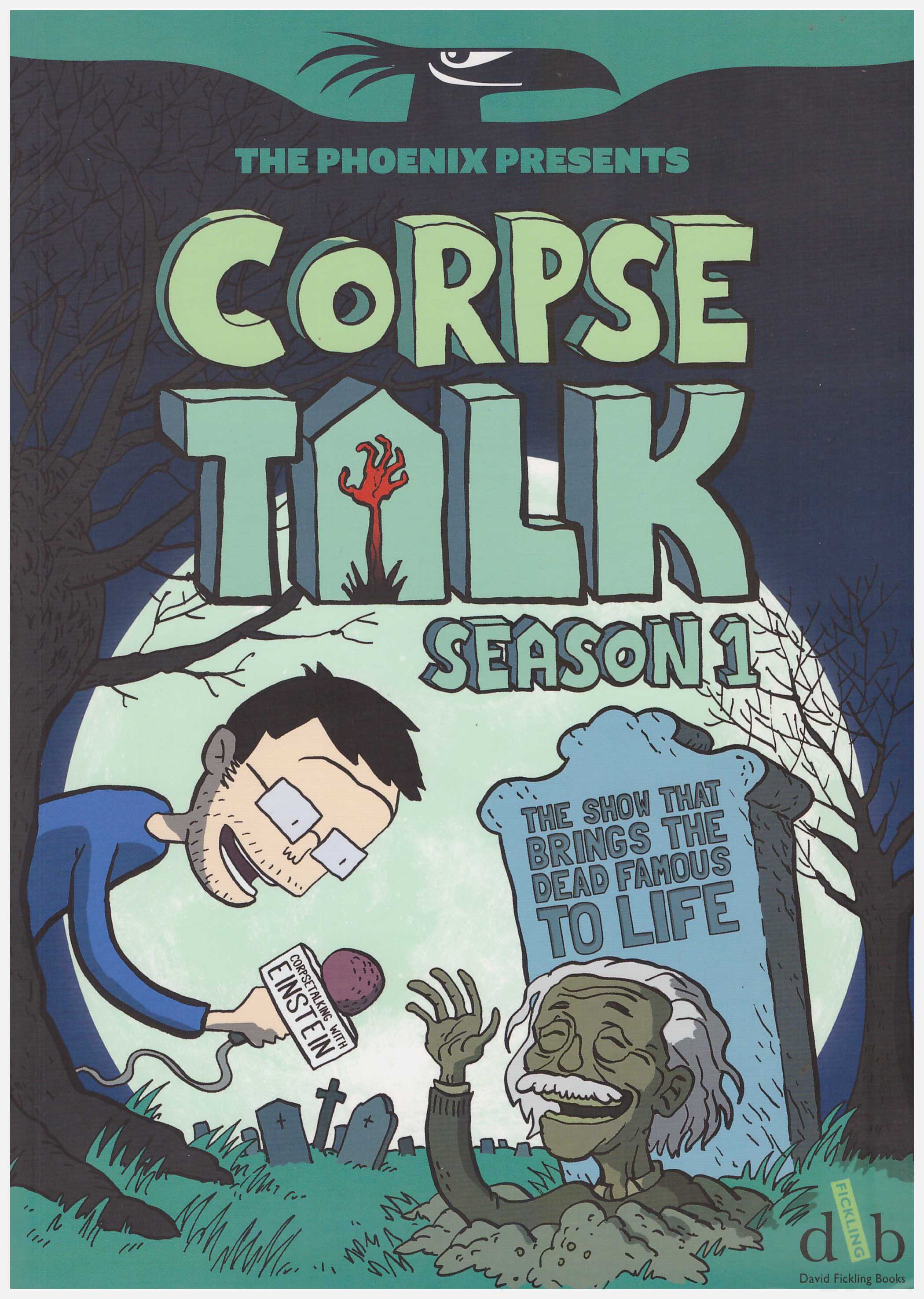 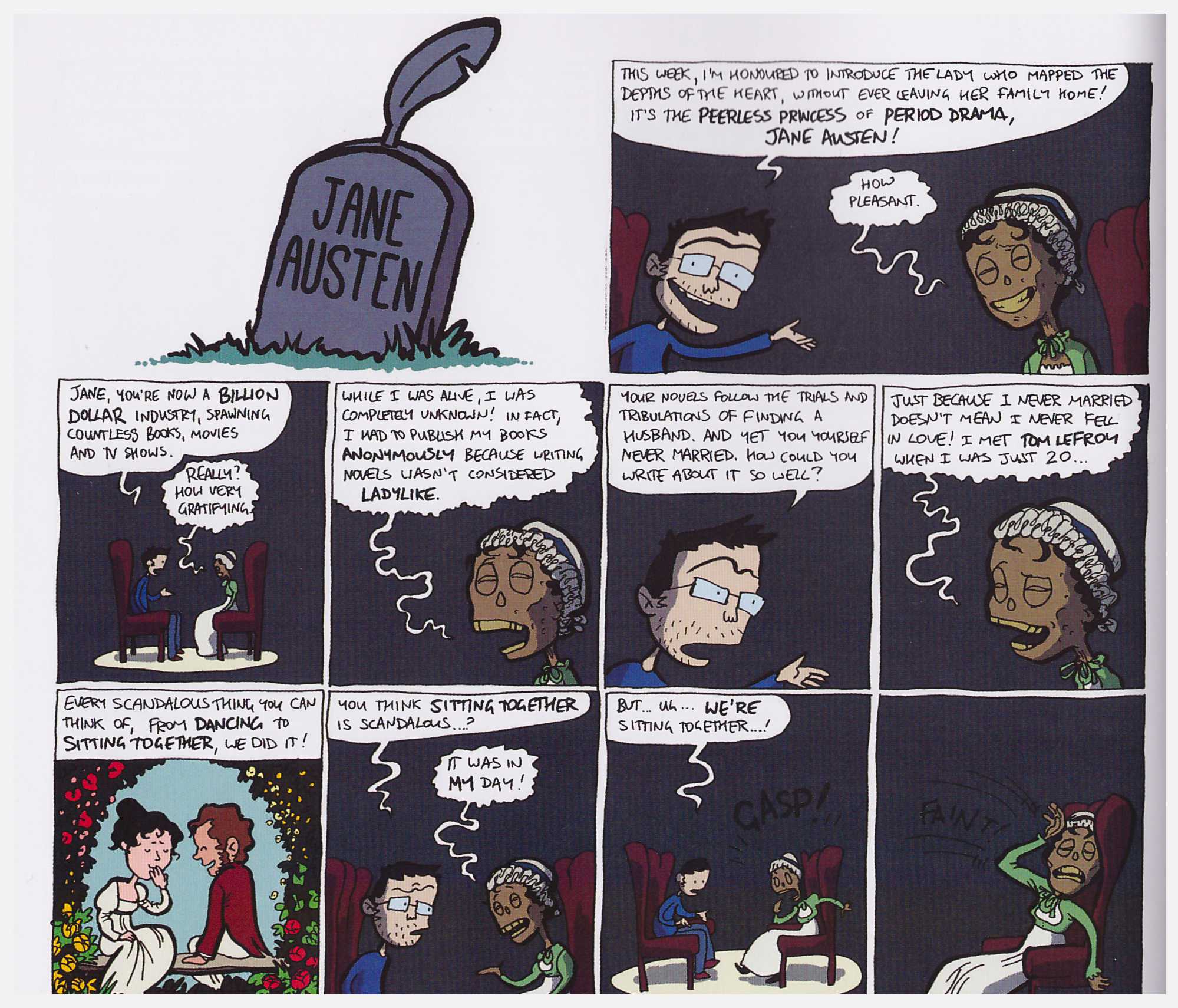 Adam Murphy developed quite the bizarre idea for UK children’s comic The Phoenix. He introduces his caricatured self at the start of the book, points out how many interesting tales there’ve been about the famous and the infamous throughout history and sets about exhuming them for interview.

It’s engaging method, a gruesome variation of the sugar-coated pill imparting historical knowledge painlessly amid the pages of an otherwise anarchic comic. It’s not without precedent, as Murphy takes his cue from the Horrible Histories books (and later TV show), but he works the form in thoroughly entertaining fashion, and fair play to him for not always selecting the obvious subjects. In keeping with the selected presentation, Murphy maintains an irreverent tone throughout. Henry VIII is “The King of Bling, the Ultimate Rudeboy”, Genghis Khan is “Chairman of the Horde”, and “He rhymes with ‘chickens’, it’s Charles Dickens”.

Strips vary between one and two pages of small, excellently cartooned panels (although the six wives of Henry VIII require four). To pack the information in Murphy never uses less than twenty panels per strip, and yet it never seems cramped, which is quite the skill.

In addition to the 33 profiles, there are illustrations of the various corpses having a day at the beach, or in a haunted graveyard, and his timeline is presented as a cut-away scene beneath a cemetery. The older the subject, the deeper they lie. Some subjects also warrant an accompanying full page illustration. Each strip begins with the subject’s name on a gravestone, each adorned with something relevant to them.

Everyone will learn something from this. If known at all outside art circles, Katsushika Hokasai is a familiar name due to a single illustration, that of a great wave, which Murphy skilfully incorporates into his Blackbeard feature. Yet he completed over 35,000 illustrations and paintings during his lifetime. Peanut butter was one of over 300 peanut-related products developed by George Washington Carver. After founding the nursing system as we know it, Florence Nightingale spent over 40 years bedridden.

This is charming, funny, and as Ben Forrest (aged 12) has it on the back cover, “Corpse Talk is really epic and so is Adam Murphy.” Don’t miss out on Season 2. 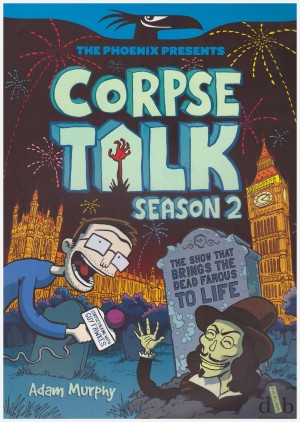 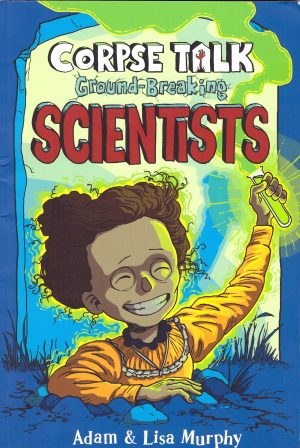 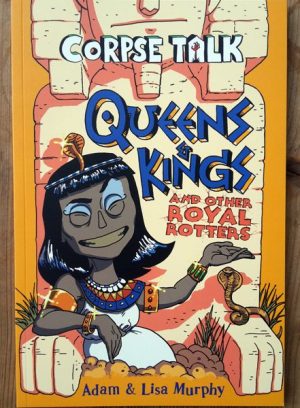