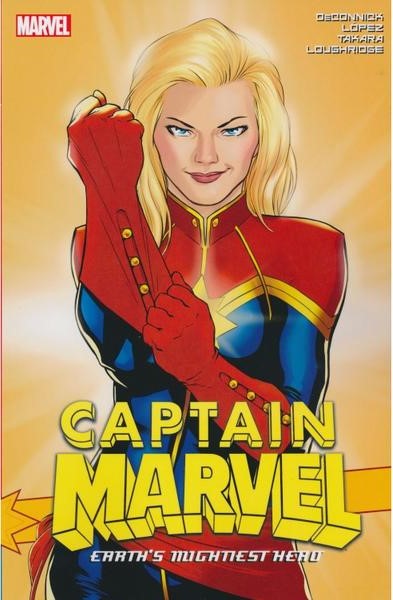 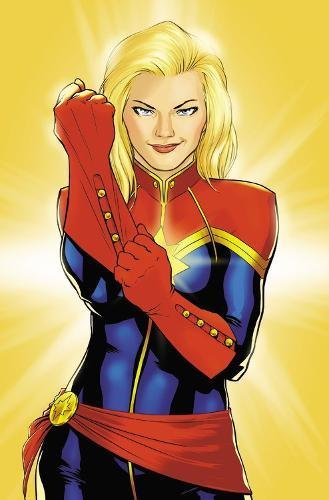 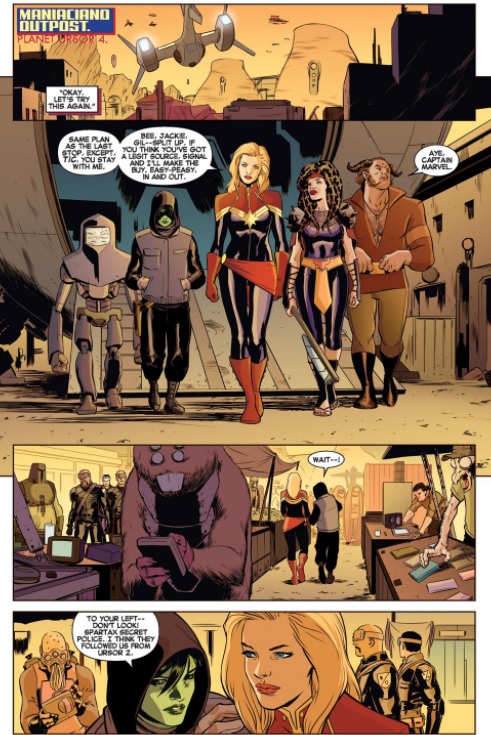 With this volume, Kelly Sue DeConnick’s run of Carol Danvers stories reaches its high point. Previously collected in Higher, Further, Faster, More and Stay Fly, these comics from 2014 and 2015 represent the first year of a relaunched Captain Marvel series, with a Carol who has become (once again) detached from her memories. The relaunch provided the opportunity for DeConnick to change the environment for Captain Marvel, and to take her into space. This involves ditching almost all the previous supporting cast (though they do turn up in a couple of stories at the end of this collection), but the new cast she replaces them with is interesting and well-delineated. DeConnick writes with humour, finds a voice for Carol, and provides top quality science fiction superhero adventure.

What the relaunch also provides is an opportunity to get a new artist on board, David Lopez, who draws most of the material here (see sample image). At last Captain Marvel has a regular artist, the lack of which was a problem that had dogged the series during the previous run. Moreover, in Lopez there was finally an artist suitable to the material, fulfilling the potential previously been suggested by cover artists such as Amanda Connor and Jamie McKelvie. Here Lopez gets the chance to design a series of alien characters and planets, and clearly relishes that opportunity. Marcio Takara fills in on a humorous tale featuring Rocket Racoon, and ensures the reader doesn’t miss Lopez too much. Lee Loughridge colours excellently throughout, and earns a deserved cover credit.

Carol Danvers is a fan favourite character, but it is rare that she has been written as well, and as consistently, as she is here. Reading what’s in effect two graphic novels combined also reveals the sum of the parts is better than the components, revealing a tight continuity and how well certain elements have been placed for later use. DeConnick’s run concludes in Captain Marvel: Earth’s Mightiest Hero, volume four.