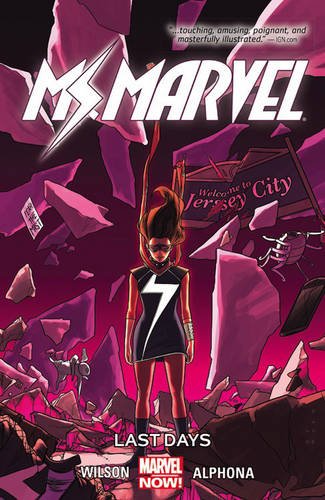 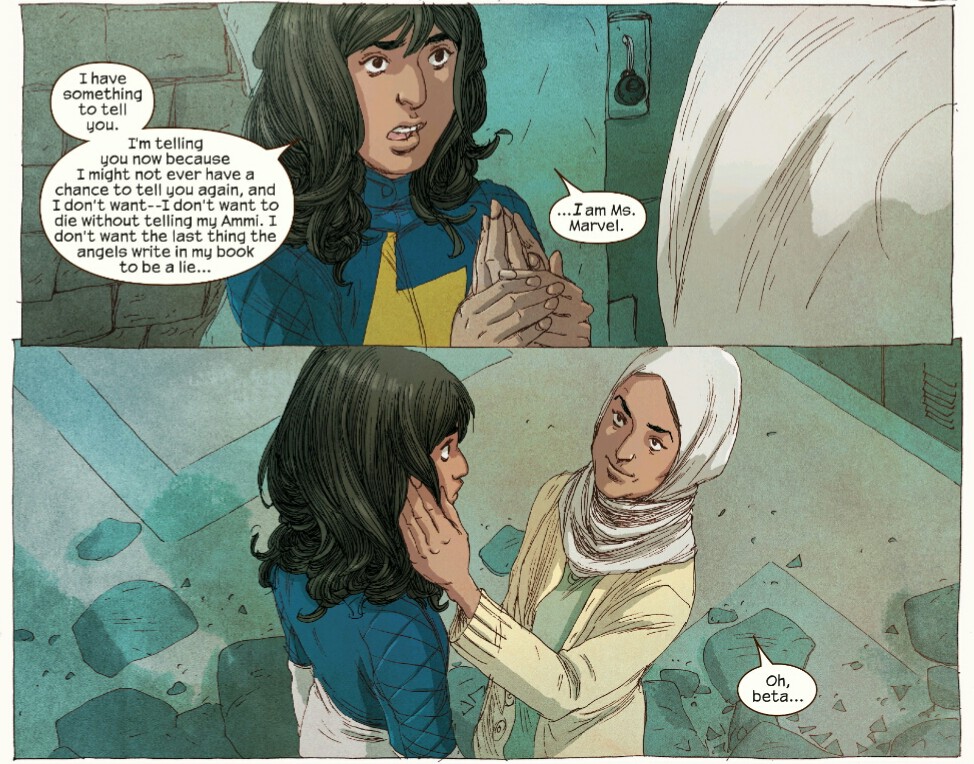 In 2015, the Marvel Universe collided with the Ultimate Universe, ending both. This was a big reboot event of the sort that DC seem to do every couple of years (see Infinite Crisis and Final Crisis), but it was a first for Marvel (though no doubt not a last). Many titles ran Last Days storylines, and then followed several Secret Wars and Warzones series, as Marvel spent several months dismantling sixty years of continuity.

In amongst all that, G. Willow Wilson produced something wonderful. The Ms. Marvel ‘Last Days’ arc is a delightful exploration of what can happen when a bunch of fairly ordinary people are confronted with the end of the world, even if they don’t quite understand what that means. Supporting characters have personal revelations, and show considerably more depth than the reader might originally have imagined. Kamala Khan meets her idol, Carol Danvers. She reveals her superheroic identity to her mother – one of the notable things about Ms. Marvel is that it deals with secret identity issues at a time when many Marvel superheroes no longer bother maintaining dual identities. And the story ends on a final, beautiful elegiac moment, a perfect combination of Wilson’s words and Adrian Alphona’s artwork.

Alphona is indeed back after fill-in artists in Crushed. His cartooning set the style for Ms. Marvel right from the start, and all other people who have worked on this series remain in his shadow. He contributes enormously to the unusual and appealing look of the comic. Ian Herring’s colours are also important.

The volume is rounded out by a couple of variant covers, and by two issues of Amazing Spider-Man in which Ms. Marvel guest-starred. Clearly plotter Dan Slott and scripter Christos Gage understand the inherent similarities between Ms. Marvel and the early Spider-Man, and exploit that in this story, but, as with Mark Waid in the S.H.I.E.L.D. tale (see Crushed), Gage can’t write Kamala as well as Wilson. Added to this, Giuseppe Camuncoli and Cam Smith’s artwok is much more typical of a 2010s comic than Alphona’s, and the result is an ordinary looking chapter.

The volume as a whole, though, must be judged on Wilson and Alphona’s work. On that basis, this is essential comics reading.