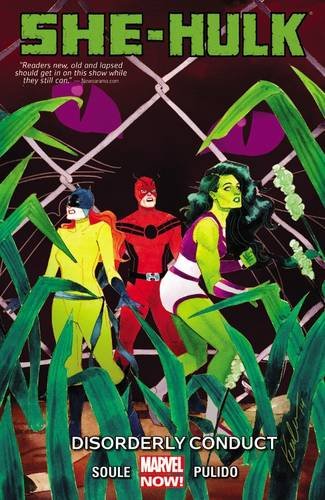 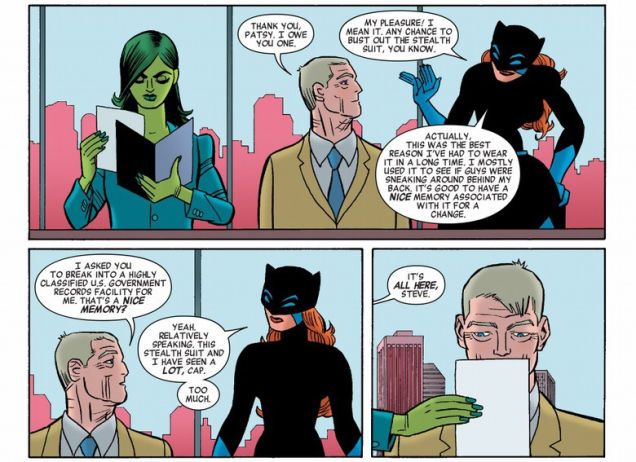 Disorderly Conduct continues directly from Law and Disorder, with the return of Patsy, Angie and the other residents of the building where She-Hulk – a.k.a. Jennifer Walters – set up her solo legal practice. This is drawn by Javier Pulido all the way through, rather than switching part-way, making for a bold and colourful art style that consistently fits the book’s witty tone.

Unfortunately, Charles Soule’s writing doesn’t maintain the high standards set by the previous volume. An initial stand-alone adventure with a cameo from Ant-Man and a heart-to-heart between Jennifer and Patsy is fun, but while the rest of the book has good moments it’s incohesive overall.

A three chapter story featuring Captain America is based on the interesting premise of She-Hulk facing down another superpowered lawyer. Unfortunately, it’s overly-long, and the prominent legal elements fail to convince in a way that destroys the already dragging dramatic tension. The case against Cap is so weak it’s hard to understand how it made it to court, and despite her “good lawyering” being emphasised Jennifer’s only real defence is repeating that Captain America is important over and over again. Additionally, the story falls prey to the trap of trying to make the storyline du jour retroactively key to a character’s origins in a way that just isn’t credible.

The book wraps by concluding the Blue File plot with an unexpected twist. However, the emotional impact falls flat as the plot has been dropped for four chapters and none of the characters involved have been present enough to justify an audience reaction to their actions or fates.

Though Disorderly Conduct looks good and some individual elements of humour and drama are great, the volume as a whole fails to match either the hype or the actual content that gained Law and Disorder so much critical acclaim.