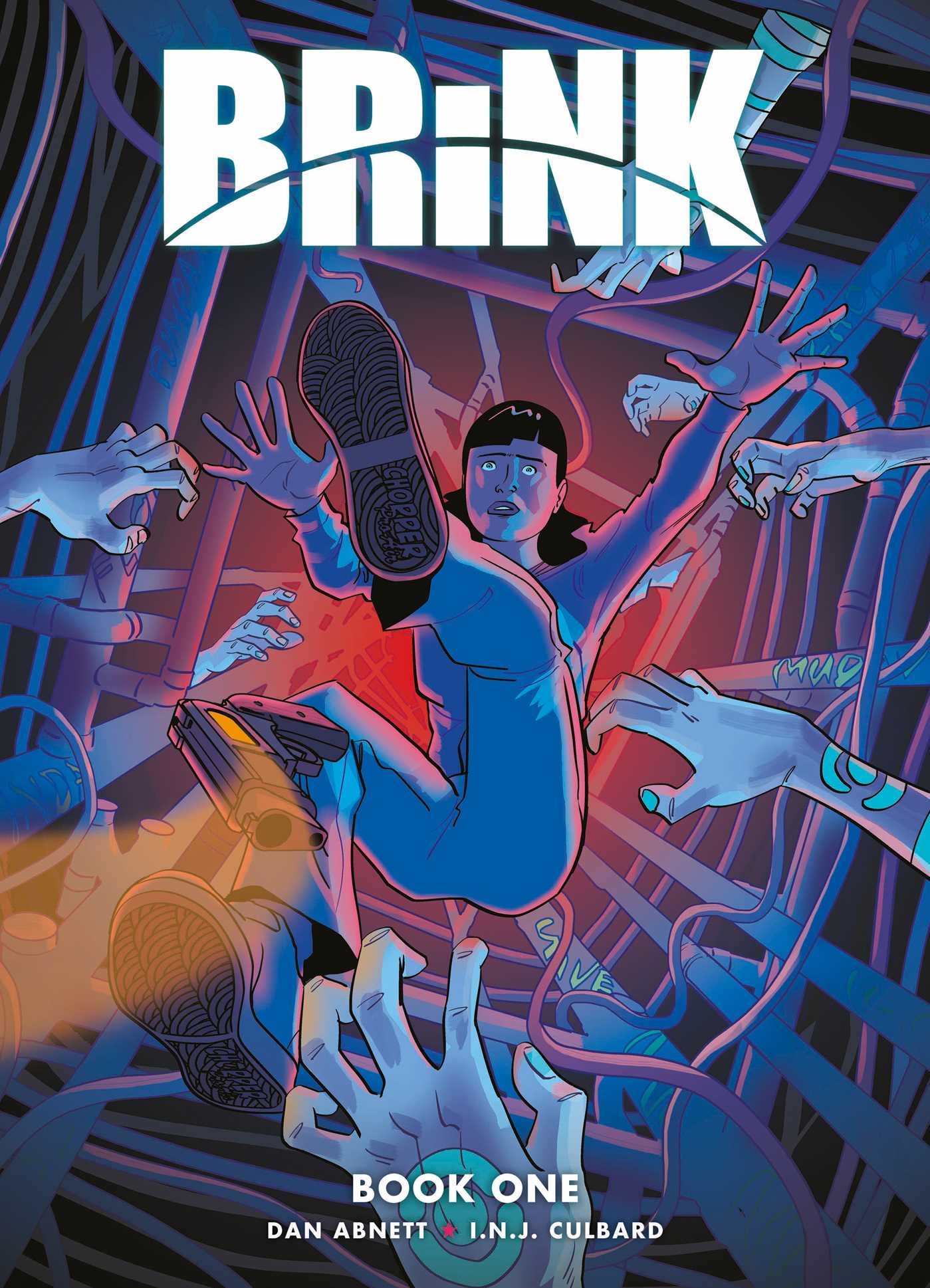 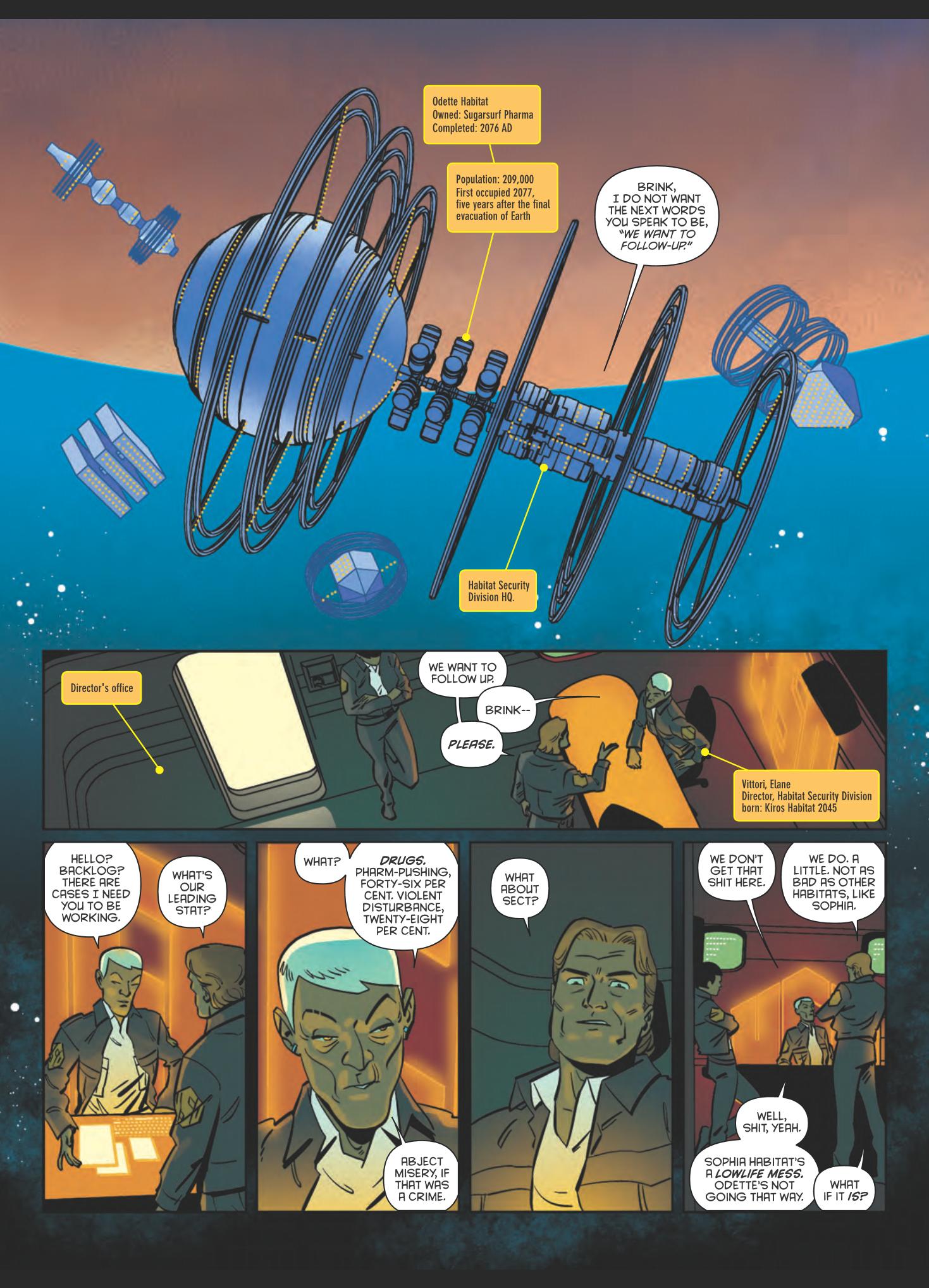 In his introduction Dan Abnett reveals that Brink’s plot is a slow burner, and he’s telling the truth. It was conceived as a deliberate contrast to the generally action heavy content of 2000AD, where it was originally serialised. What begins and continues for some while as a futuristic equivalent of a buddy pair police procedural investigation eventually blooms into something else, giving a new slant on the title. There’s a philosophical aspect to much of Brink from this point, when aspects that have been bubbling along as subtext suddenly acquire a greater significance.

Carl Brinkman is known as Brink. He and Bridget Kurtis are security investigators among a population of over 200,000 on an orbital space station in the late 21st century. What at first appears to be an ordinary killing evolves into a complicated investigation with potentially terrifying consequences.

The cast are distinctively designed by I.N.J. Culbard, down to bit players. While working in a cartoon style that brings Rian Hughes to mind, he deliberately ensures these are ordinary people, some of them even qualifying as ugly, and it’s refreshing to see for a form where glamorous is default. He employs an interesting form of page design, overlaying individual small panels over a larger illustration, and although it’s not obvious, Culbard’s put a lot of work into set design, with plenty of sketches to be found in the back of the book. The result is a comprehensive and credible environment. At times the space station resembles areas of Mega City One (the walkways being one), but the clothing and locations are distinct, and the labelled technology great, a throwback to the explanations found in Dick Tracy newspaper strips.

It’s always interesting to see people attempting something different. Sometimes it works, sometimes it doesn’t, but better that than the same old, right? In terms of plot there’s some touchstones, but what sets Brink apart is the lack of narrative captions (or thought balloons). Some explanatory boxes detail the future technology, but the cast say what they say, and it’s up to you whether to believe them or not. As he’s working with dialogue only, Abnett has to be clever, wrapping up what needs to be said in those dialogue balloons while simultaneously making life difficult for himself by introducing unfamiliar terms to bolster his theme. One of them causes a gag reaction on hearing it, and he drops all sorts of interesting snippets in passing.

Brink comes to a halt, but there’s more afoot, and this ends on a cliffhanger. It’s been an entertaining ride, and surely enough has been done to make Book Two a must buy. 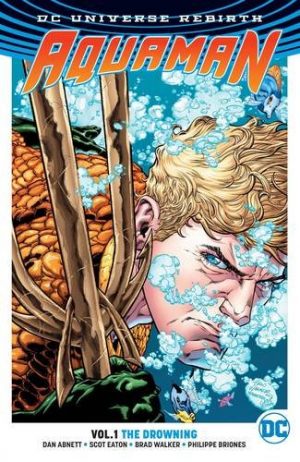 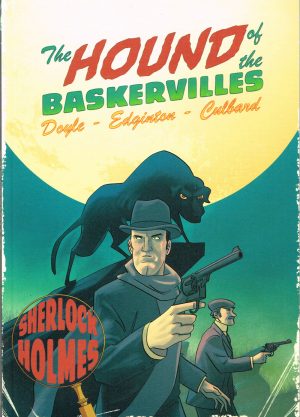