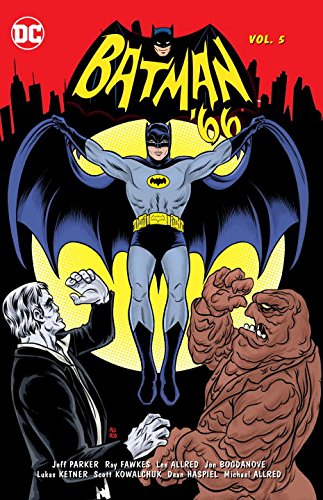 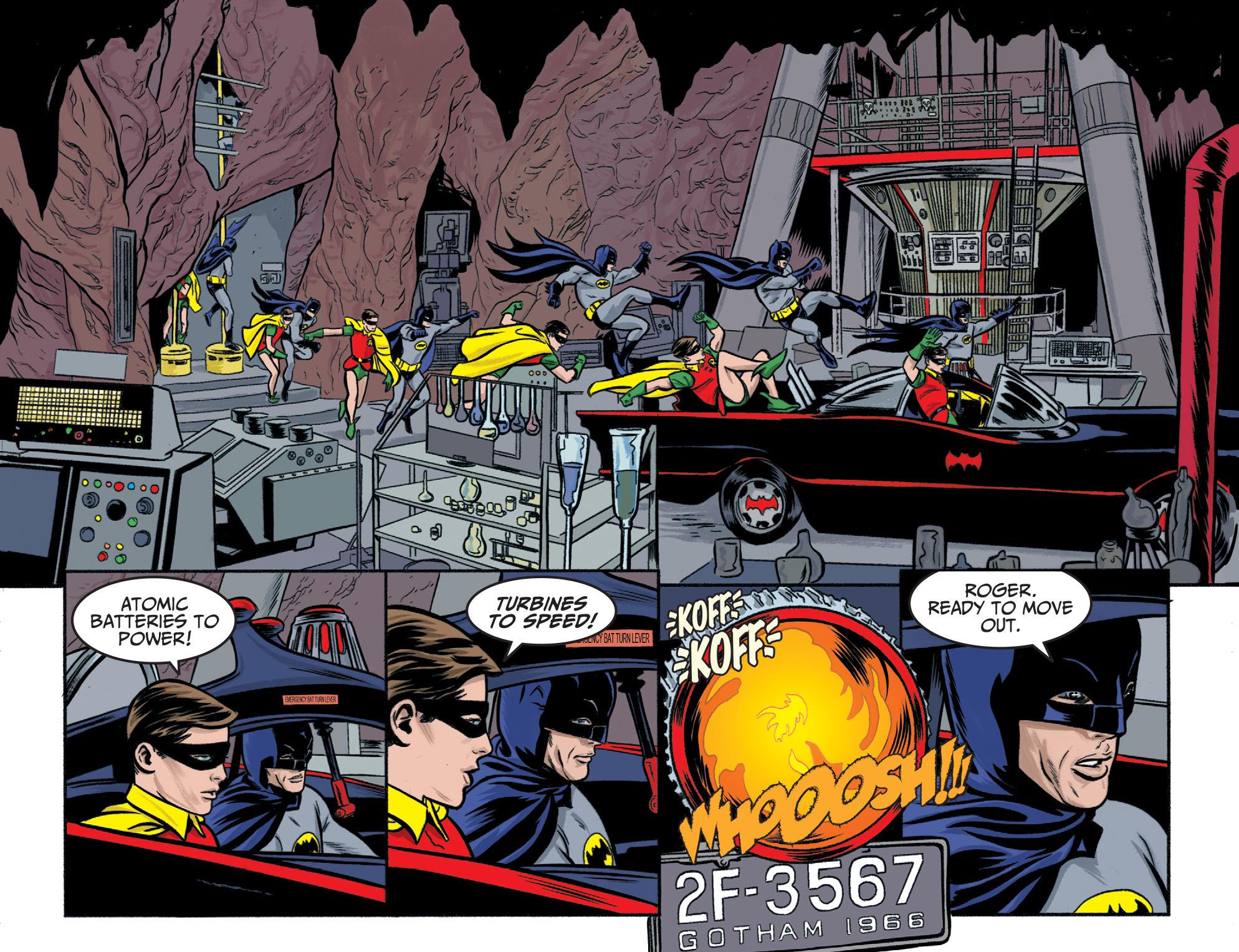 While not exactly failing at the final hurdle, this closing Batman ‘66 material is the weakest since the second collection. Rather surprisingly, having long written the best interpretation, Jeff Parker runs out of inspiration. His opening scripts feature Solomon Grundy, then Clayface, and there are similarities, both rising from the ground for one, and neither feature the Gotham background so central to the atmosphere of the 1960s TV Batman. Nor do his later Poison Ivy and Scarecrow tales. While interesting to see villains not included in the TV show, with little alteration these could be standard Batman plots, although the dialogue saves them. The late Adam West’s stilted delivery rattles around your head as Parker’s Batman speaks, but there’s minimal use of the ridiculous plot contrivances one might expect. His Bane story is better, again utilising a villain never seen on television, and benefiting from the inclusion of Batgirl, the Riddler, and an unusual location.

More used to conventional superheroics, Jon Bogdanove transfers well to the straight-faced slapstick needed for Batman ‘66, and his cast likenesses are the best in the book. His pages also showcase some great action on Ray Fawkes’ very good Marsha Queen of Diamonds story. A villain who’d be no challenge for the Batman of the comics here flummoxes him with a locked door. Fawkes captures the essence of the TV show via starting with Gotham’s millionaires pictured simultaneously emptying their bank accounts, leading to a ridiculous escape, a great psychedelic sequence, Batman and Robin on public transport and a fine selection of pompous and preposterous dialogue: “Once we knew the frequency of your hypno-sparklers it was a simple thing to time our blinking to keep out the light!”

It’s a joy to see the illustrative return of Ty Templeton and Jonathan Case, the only regret being that both only feature on short strips, but Templeton’s is a standout with Gabe Soria uniting bat-villains who want their reputations tweaked by an ad campaign. Dean Haspiel, an artist who may seem ideally suited to the strip, is strangely subdued, not matching his work in volume 3. He opts for out and out cartooning, resulting in a look more attuned to the animated Batman, and both of Parker’s scripts for him are again rather dashed off. Brent Schoonover delivers a great graveyard setting and while Lukas Ketner’s work is somewhat looser than Giancarlo Caracuzzo, Jesse Hamm, or Scott Kowalchuk (who’s improved since vol 4), it works in context.

After a fine selection of covers for the series, it’s nice to see Michael Allred illustrating the closing story. As Allred is a man who’s talked in interviews of playing the Batman TV series continually on a loop and of it being one of his formative influences, it might be expected he shines, and he does, as the sample art spread of Batman and Robin exiting the Bat-Cave displays. His brother Lee’s script is note perfect, incorporating the animated title sequence scene uniting all the Batman villains, providing a window cameo for the Daily Planet staff and some great dialogue. It’s a fitting end to the series.

But wait! Holy continuation! This is the final volume of solo stories featuring the TV Batman of the 1960s, but plenty of team-ups follow. To date he’s encountered the TV Wonder Woman of the 1970s, the Green Hornet, Steed and Mrs Peel, The Man from U.N.C.L.E. and the Legion of Super-Heroes, 1960s version (or more accurately, 2960’s version).