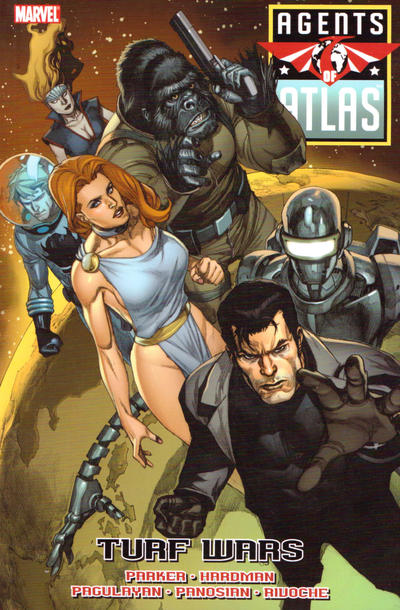 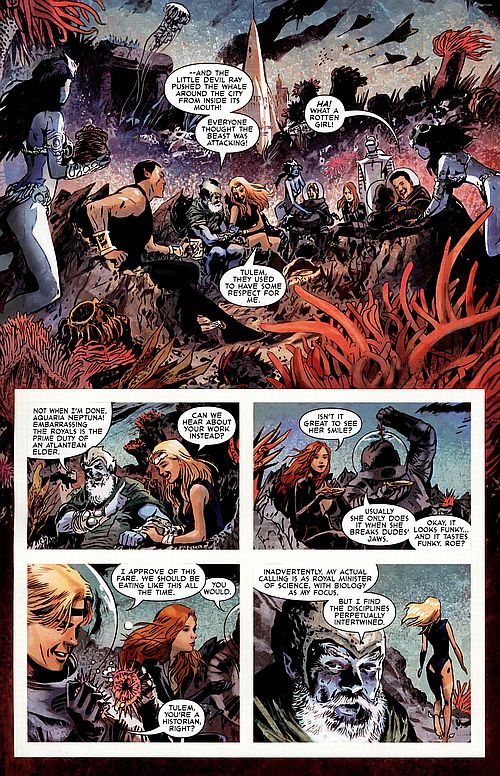 The third collection of Jeff Parker’s Agents of Atlas sees a return to the series mythology. Since the uniqueness of this series originally derived from the development of its characters through retroactive continuity, allowing the writer to delve again into this rich seam makes for a better book than the previous Dark Reign, which involved them in a crossover.

The opening chapters show the team heading to the depths of the oceans to meet Atlantean monarch Namor and use him to get to their enemy Norman Osborn. What follows is not another slugfest but a bittersweet portrayal of the reunion of Namor and Namora, as the former Atlantean believed his cousin long-dead and the latter thought her cousin had abandoned her. The long, shared history between the characters is movingly used by Parker, who combines a doomed romance scenario with unexpected reveals about the real nature of the powerful human/merman hybrids such as Namor and Namora.
Namor’s realm is beautifully depicted by Gabriel Hardman, here drawing in his realistic style. His art enhanced by the evocative and subtle colors of Jana Schirmer, Hardman gives the reader a fully-rendered seascape with flowing waters, rich animal life and impressive monsters.

Parker also manages, as he often does, to combine drama with humour, with Gorilla Man’s sarcastic voice as well as with Marvel Boy’s attraction to a giant sea anemone, due to the tentacled beast’s resemblance to aliens he lived with back on Uranus. Adding to the fun quotient are the madcap recaps presented in the voice of Gorilla Man, far more entertaining than these one-pagers in most comics.

The second and longest story also centres around a doomed romance, but one played very differently. Back in the 1950s, Jimmy Woo was in love with Suwan, the niece of his enemy. Nowadays, Suwan is still young and beautiful (who isn’t, in superhero comics?), thanks to the Atlas Foundation science, as Jimmy discovers when he decides to pay her a visit–though she’s not the helpless pawn of her uncle anymore…

This time joined by rotating artists Carlo Pagulayan and Dan Panosian, Parker offers us a tale of a divided empire, with Woo coming to understand that he only controls the Western part of the Atlas secret empire, the Asian part coming into costly conflict with him and his followers. You get large scale battles, death-ray robots facing each other, fire-breathing dragons manipulating everybody and a lost love tested to the limit–as well as a wise-cracking gorilla. What more could you ask for? Pagulayan and Panosian do a solid job here, with the former’s style more realistic (to the point of being sometimes a bit stiff) than the latter. Hardman’s work remains the high point of the series, though.

This content originated in a cancelled series, but the Atlas Foundation had more lives than a cat and Jimmy Woo and his crew would be back a year later with Agents of Atlas: Vs, pitting them against the two most famous Marvel teams.