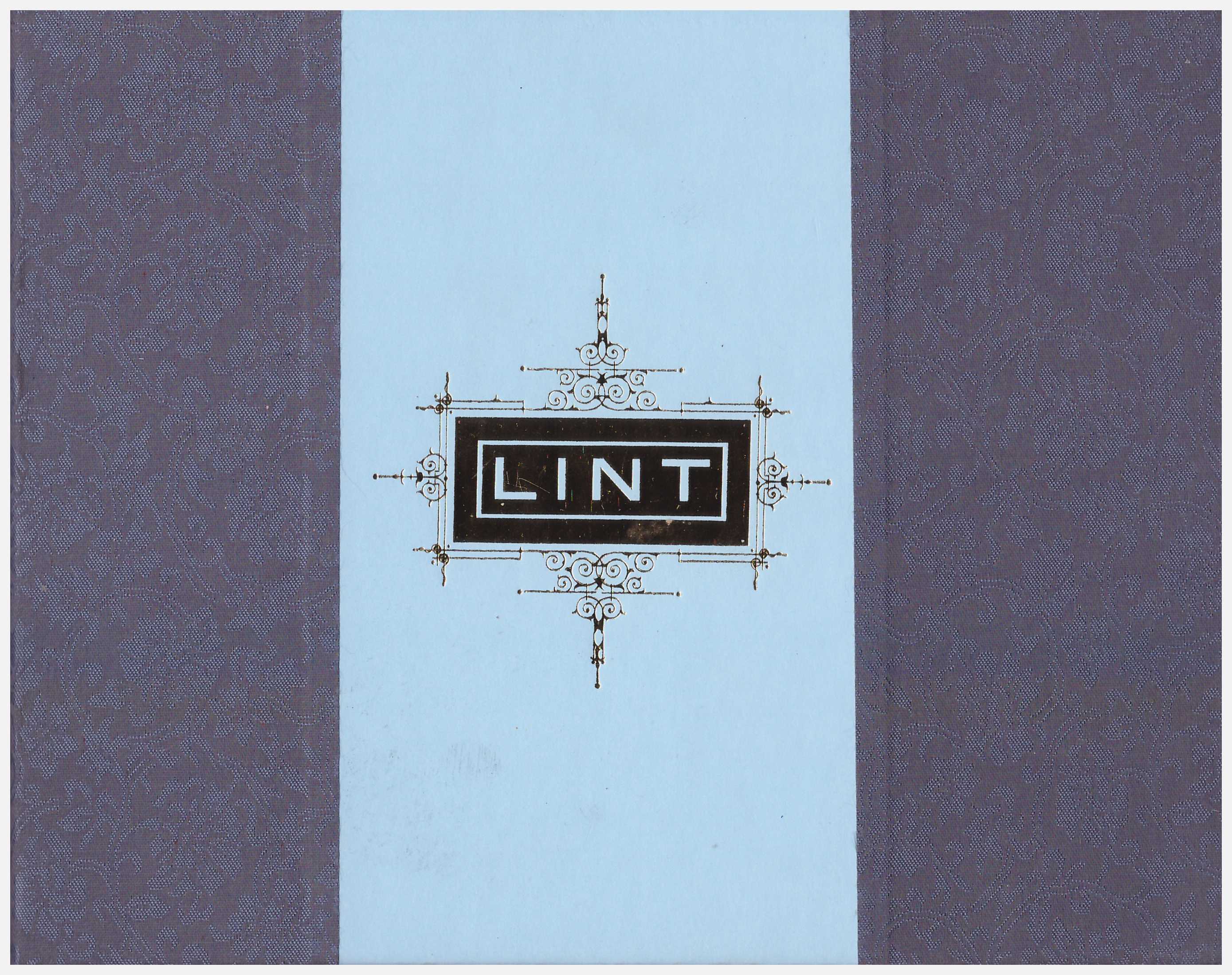 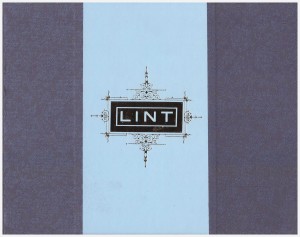 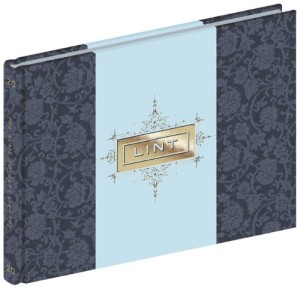 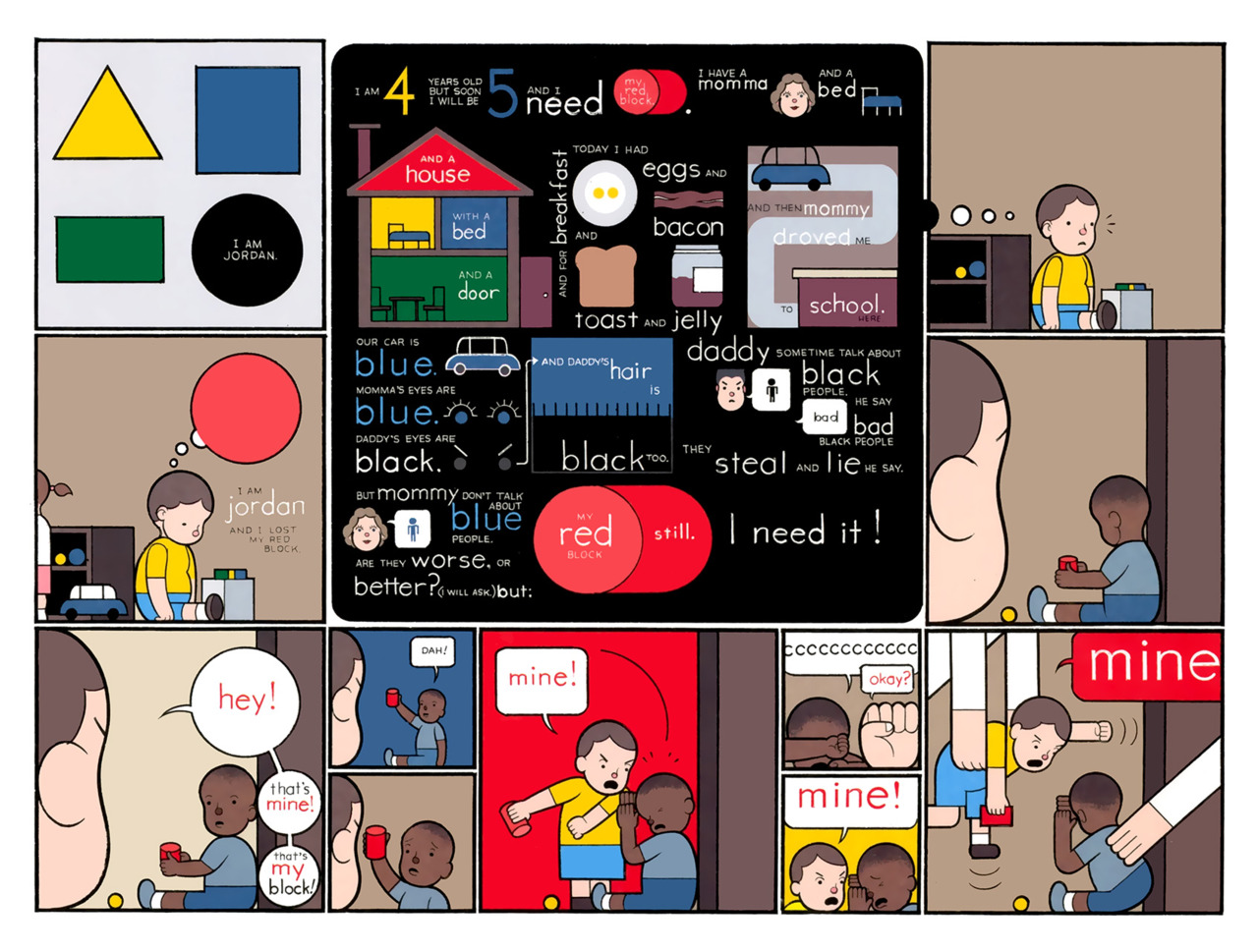 This final volume of Chris Ware’s personal anthology continues the serialisation of his second graphic novel Rusty Brown. That fact is easily missed, as the titular hero does not appear. Like the previous volume about Rusty’s teacher father, this reads as a self-contained novella, with the focus now on Rusty’s nemesis – slacker bully Jason Lint.

This is literally Jason’s birth to death story, seen through his developing eyes. It begins with abstract colours and shapes, progressing to images with identity labels: momma, tree, car. There’s great wit and beauty to the child’s eye views: the dots that become a face; speech balloons not yet understood as words, and so on. On one page (featured image), the main picture suggests a chalkboard with a montage of little Jason’s jumbled concepts, memories and urges: “…lost my red block…” all leading to Jason’s seizing the block from another child. As Jason matures, though, the pages become increasingly realistic, appropriately lapsing to represent illness and final decline.

Each page exemplifies a year through a key moment, often picking up from the last. On one page his mother tells him not to kill ants; and on the next, Jason runs around a funeral crying “Momma!” These first few pages are an exemplar of the formal, perceptual, and emotional power of the medium. We then follow Jason as he starts school, rebels against discipline, tries to visualise girls and imagine the secret worlds of adulthood. Life seems to be going Jason’s way. He finds love, “finds himself”, wants more and gets it at a cost. He has children who grow up and are in turn affected by their father’s formative experiences. There’s so much in here: rock music, football (American), college fraternities, extra-marital affairs, with each typically explored in a single self-contained page, and all taking forward this life story, year by year.

Visually, Ware follows his signature rules: line drawings without texture or shading, architecture face-on or in 45 degree ‘isometric’ view; colours typically flat but nuanced, and palettes sensitively varied. It never palls, as there’s always some new element to be rendered Ware style: a 1970s car, a Chopper bicycle, moulded plastic chairs with integral half-desks, a recording studio, a party at a kidney shaped pool…  Occasionally, Ware steps beyond his own rules, but it always seems purposeful, for example rendering a girlfriend with a realistic face, compared to Jason’s more schematic features. It’s as if she is more real, more alive, and even Jason can see it.

It’s not uncommon for Ware to compress thirty panels onto a page, with large images for scene-setting, followed by a clusters of micro-panels unfolding the drama. Each page is a frame-able artwork in itself, elegantly composed, with at least one stand-out image.

Superficially, Lint is similar to Ware’s debut Jimmy Corrigan, but it’s a progression. Visually, he has expanded his diagrammatic style to be more realistic in places, and pushed his layouts even further. While Rusty, like the earlier Jimmy, is a sympathetic loser, Jason is harder to like, making this a more ambitious piece of writing. Ware depicts Jason’s life and self with forensic and unflinching accuracy, yet without ever forcing the reader’s response.

At a glance, the density of the pages may be off-putting. However on reading, it flows seamlessly. It’s difficult to find a single thing to criticise, or a reason why anyone interested in graphic novels shouldn’t enjoy this. It’s an absolute triumph.

This was the final Acme Novelty Library volume, but the collected Rusty Brown contains an additional novella about teacher Joanne Cole, with cameos of troublesome pupil Jason. 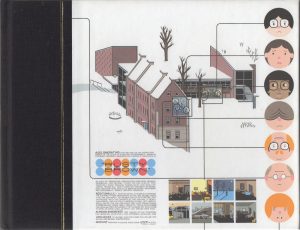 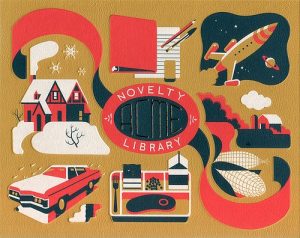 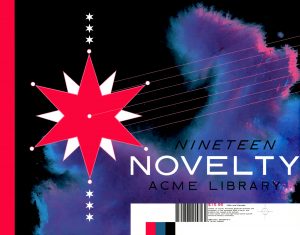 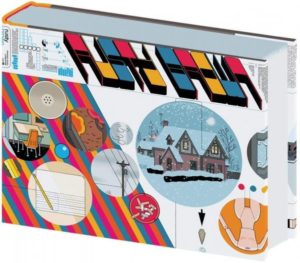