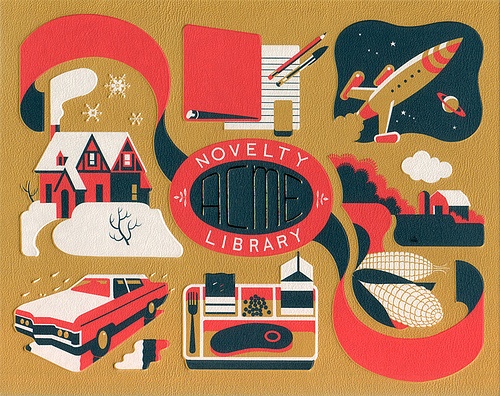 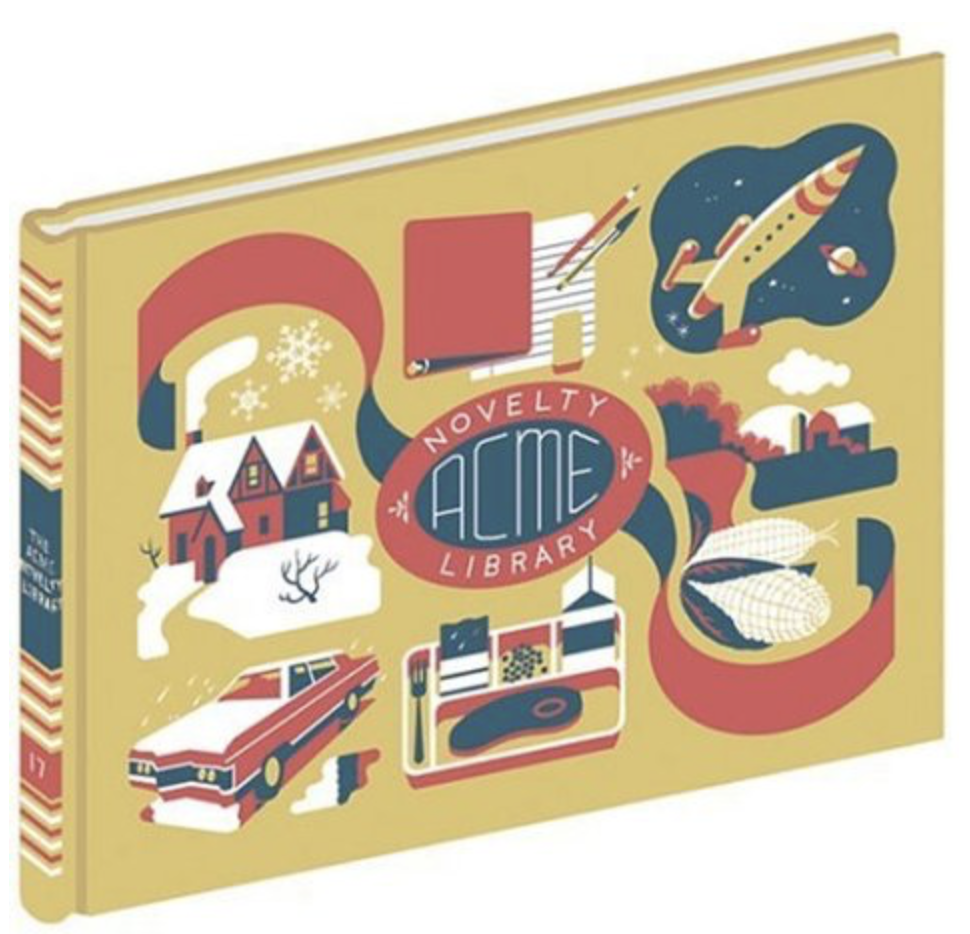 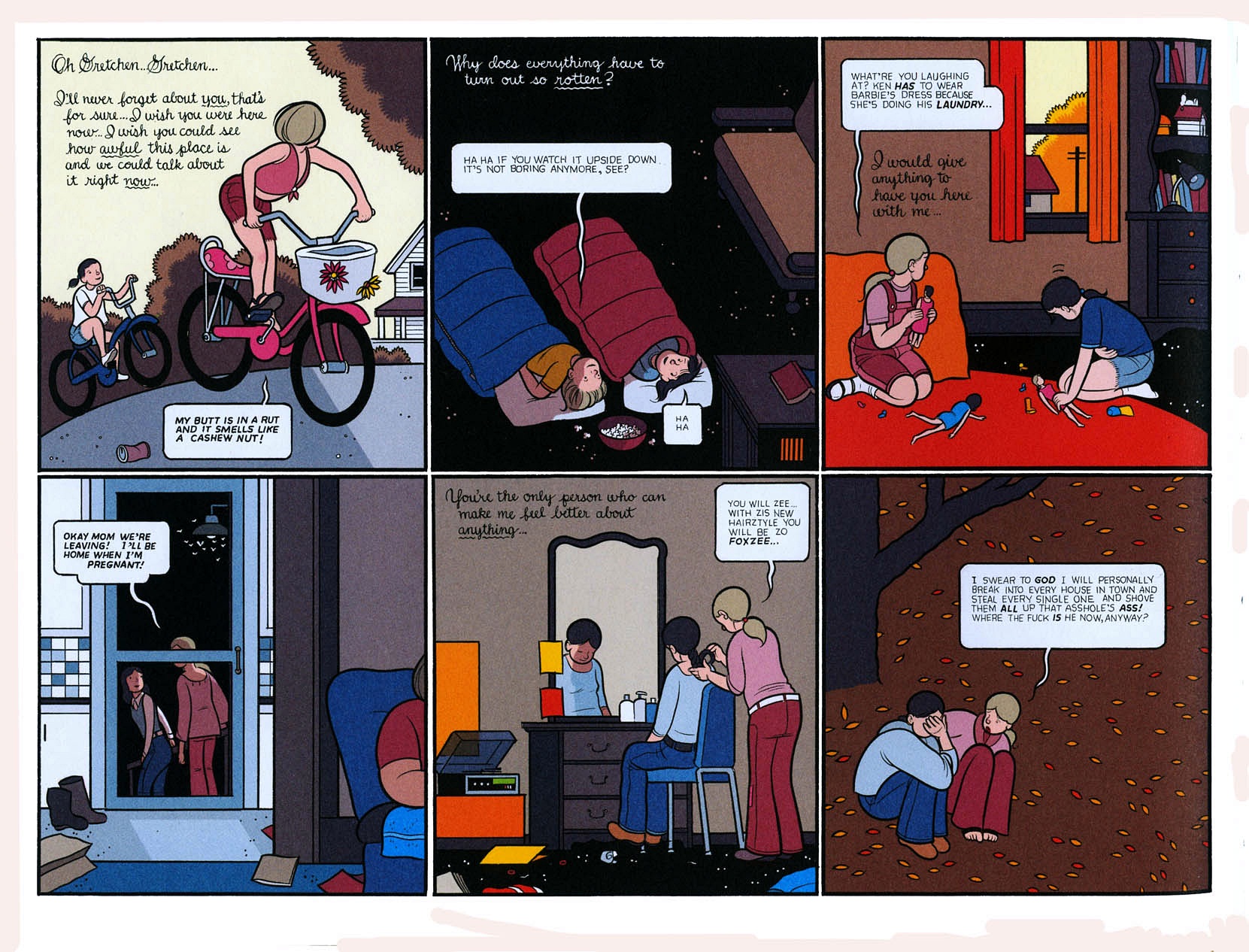 Acme Novelty Library was Chris Ware’s personal anthology, where he serialised Jimmy Corrigan: The Smartest Kid in the World, prior to its successful collection as an award-winning graphic novel. This second issue in landscape format hardback concludes the extended prologue of his follow-up Rusty Brown.

Being again named after a fantasising loner, immediately associates this with Corrigan. However, the debut followed one family, over decades while this follow-up extends Ware’s reach: expanding his cast, yet in this volume reducing his focus to a single day and place. It’s somewhat misnamed Rusty Brown, as this is a multi-character novel, connected by little more than the protagonists’ collocation – at an Omaha, Nebraska school in the 1970s.

This second volume opens with a brisk recap of characters and story, and thereafter continues the first day at the school for eight year-old nerd Chalky White, and his teenage sister Alice. As with his debut, Ware is strong on character, and takes the time to properly dramatise their inventories of internal conflicts and reactions to external challenges. Having established individual characters in Acme Novelty 16, Ware now brings them together. Rusty has had to lend his desk to the new arrival, with no option but to leave his Supergirl doll within. Chalky’s sensitive response to this could save Rusty’s shameful secret and form a bond between the similarly nicknamed boys, however bullies intervene. Alice White also makes new friends, but proves less loyal when a biology lab-partner follows her to the toilet to check she is okay, and Alice mocks her to impress the cooler girls in Art.

Alice, as fresh blood in the class, also provides some respite from ennui and monotony for Jason Lint. He bullies Rusty, yet sucks up to the teachers, while mocking them to the class behind their backs. If we don’t get much sense of Jason’s motivation, that’s perhaps a fair reflection of his own plausible confusion, and lack of affect. After this single day ‘prologue’ (as Ware describes it) later chapters will stretch back and forward in time, and Jason’s lack of affect will be explored in his literal birth to death story in volume 20.  Woody and Joanne appear here only as teachers, accessories to the pupils’ experience, but their backstories, woes and dreams, will be fleshed out in their own chapters – effectively self-contained novellas.

The story moves from school only for a flashback (pictured) to Alice in Michigan, with Gretchen her friend – possibly idol – left behind. This section shifts gear to a more compressed storytelling style, almost a montage effect. The pair exiting a house with “I’ll be back when I’m pregnant” evokes so much of the teen/parent dynamic. It may also hint at the Whites’ unseen mother’s backstory and subsequent abdication of parenting, which sends them to Nebraska. As with the previous issue, though, the narration of the characters’ consciousness is occasionally heavy-handed – we don’t need to be told Alice regrets shouting at Chalky, or “would give anything to have [Gretchen] here”.

Visually the previous volume suffered from the repetitive setting of classroom and snowscape, with their restricted palettes. Here though, Ware works more visual interest into the scenes: dissection of frogs in Biology, easels and a still life in Art. The Gretchen scenes masterfully indicate the passing of time through seasonal settings, changing fashions and the girls’ physical maturation. As female buddy moments, these scenes compare with high water-marks of the genre Locas and Ghost World, and following a slight visual fatigue in the opening volume restore Ware’s usual five star rating.

Additional pages of Branford the Bee, would form part of Building Stories.