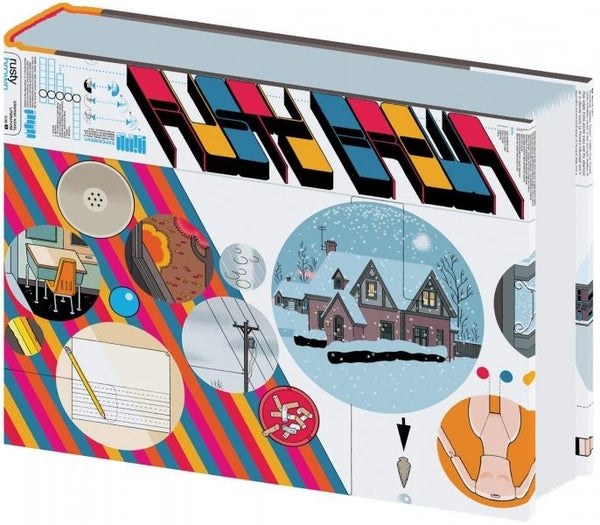 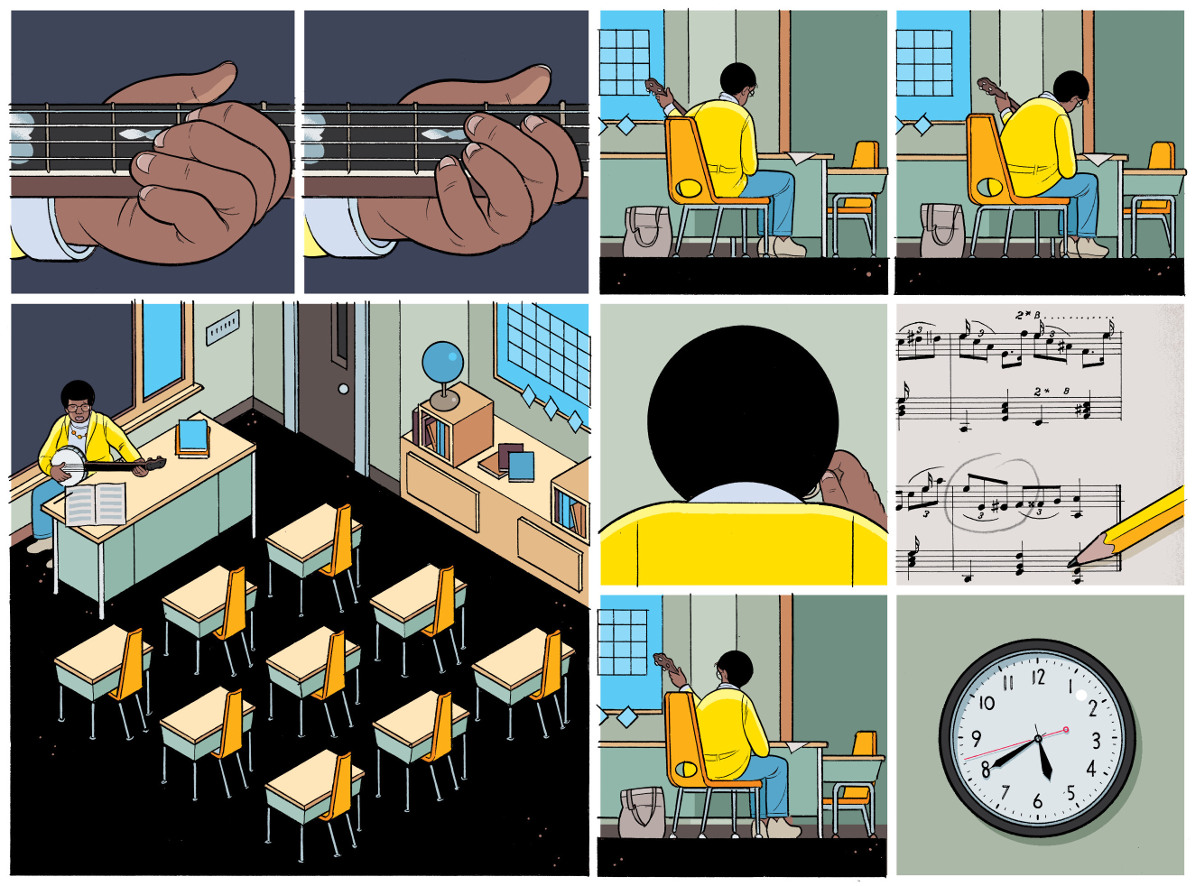 Ware’s artwork is by now familiar. Distinctive features include repetitive imagery, islands of tiny panels, diagrammatic rendering, and what he calls a “glacial” pace. The themes also seem familiar. Rusty, (like Jimmy Corrigan), is a loner kid with superhero fantasies, but that proves a small strand, of an intricate whole.

Most of the content was serialised in Ware’s personal anthology series Acme Novelty Library. He described volumes 16, and 17 as a prologue, though at around a hundred pages, it’s a lengthy one. Nevertheless, it spans a single day, as nerdy junior Chalky White and older sister Alice start a new school in 1970s Nebraska. There they meet respective classmates: fellow nerd Rusty Brown, and slacker bully Jason Lint. Also introduced are time-served teachers W.K. ‘Woody’ Brown (Rusty’s father), Joanne Cole, and new recruit “Mr Ware”. This author avatar is close to the pupils – eyeing the girls, and smoking with the boys. Less is revealed here of Woody and Joanne, but they are each the subject of later sections, effectively stand alone novellas, albeit with spotter-pleasing cameos from the other characters. Volume 19, explores Woody’s world of pain and disappointment, which Rusty was born into, and Volume 20 tells the (literally) birth to death story of Jason – Rusty’s nemesis. For more details of these sections, see the reviews of the individual volumes.

New in this edition is a further ‘novella’, (effectively an hypothetical volume 21), centred on Joanne. After hours, she lingers at the school, practicing her banjo, and scouring local newspapers on microfiche, apparently seeking old sheet music. George, the affable caretaker offers her a lift home, but she opts to wait for a bus. She cares for her elderly mother, and sees her sister and niece in flashbacks, but perhaps not in the present…? She mothers the pupils, and showers them in cupcakes. Like Joanne’s life, the story seems to be going nowhere. Slowly though, from the silent moments and lingering looks, an absence takes shape. The tension builds, and all of Ware’s meticulously laid, and seemingly trivial, details add up to something affecting, and ultimately satisfying.

A cover endorsement compares the current volume to Ulysses by James Joyce. That may seem glib, but there are genuine commonalities. For example, Joyce and Ware’s books (at least the latter’s hundred page ‘prologue’) both span a single day. They also both mirror realistic and fantastic events: Joyce’s channelling of The Odyssey, and Woody’s exorcising of his traumas as science fiction. Ware’s ‘Lint’ section ventures into Joycean stream of consciousness, and (again like Ulysses), ends where it begins. Joyce famously applies stylistic variation across sections, and so does Ware. Look at his handling of time: the Joanne section jumps back and forwards, whereas the school day in the prologue is entirely linear. The Lint section is also linear, but compressed, it spans an entire life, one page per year. Finally, most of Rusty takes us into characters’ minds, through narrative captions and thought balloons, which are completely absent from the Joanna section. The comparison with Ulysses, then, is a fair one.

As with Ulysses, there is a danger that Ware’s book might be more admired than read. Perhaps the best approach is to ignore the heft, and simply enjoy it page by page, and section by section. Rusty Brown is beautifully conceived and executed. It’s brimming with visual delights, rich characters, telling details, and amidst Ware’s typical bleakness, moments of humour and joy. It’s well worth investing your time.