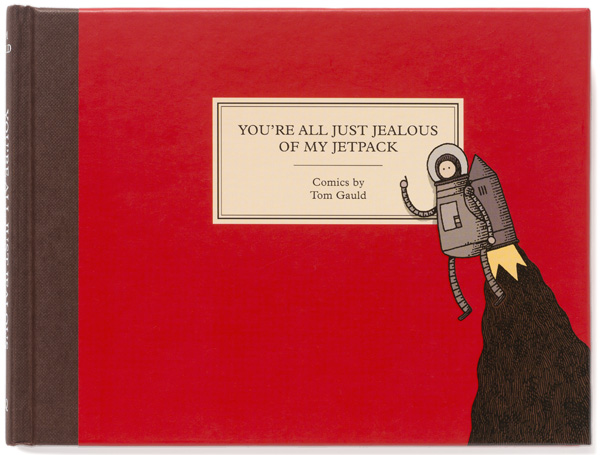 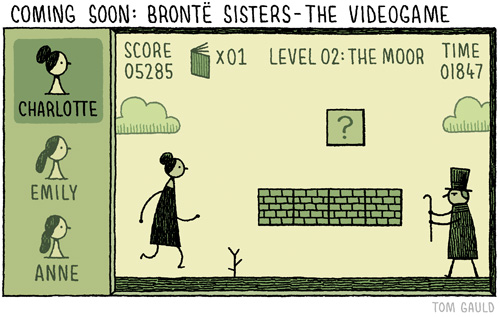 You’re All Just Jealous of My Jetpack is the retort of Science Fiction to the ‘tut-tut’ing representatives of Proper Literature. It’s also the title of this collection of Tom Gauld’s culture critiquing comics.

They may be most powerful stumbled upon individually in The Guardian newspaper or New York Times, but gathered here we can better appreciate what he does. He’s like an enthusiastic professor – tirelessly absorbing literature, media, and anthropology, then identifying and describing types and patterns, and presenting these as systematised ‘typologies’. But it’s a lot funnier than it sounds!

In the spirit of the book, here’s an analysed and categorised list of Gauld methods: comparisons, lists, mash-ups, diagrams, permutations and activities.

There’s a list of ‘Things That will be Added to the Movie Version of your Novel’. This includes; Paris Hilton, Dance Routine, Happy Ending. There’s even a piece about making lists, as ‘Francis Bacon Works on his List of Three Inventions that Transformed the Modern World’ – Tweed, and Wig are scored out, and The Compass underlined, leaving him to choose between Printing, Gunpowder, The Pork Sausage, Topiary and The Ruff.

Lists are also often the subject of the comparisons. The Elven Hero, Barbarian and Sorceress from The Original Story become respectively Web Designer, Dog Walker, and Barista in The Sequel. Images ‘On My Holiday’ are identified as The Rented Villa, Passing Tourist, Friendly Neighbour, and Holiday Read. ‘In the Novel’ these same images become: Isolated Chateau, Escaped Murderer, Lustful Countess, and Dark Secrets.

Mash-ups include “Samuel Beckett’s Adventures of Tintin’. A Gauld figure with Tintin’s distinctive cow’s-lick and plus-fours wanders a bare landscape in the dark. He’s knocked out from behind. He wakes up and thinks “I can’t go on,” quoting the famous Beckett couplet, “I’ll go on.”

‘Baseball Explained’ and ‘A Tourist’s Guide to our Islands’ are ironic diagrams. The latter is a map littered with icons identified in a key as: Pub, Accident Blackspot, Illicit Activity, and Existential Despair. Permutations of Lovers, Voyeur, Robot, Penguin, Murderer and Victim participate in ‘A Busy Day on the Boating Lake’

Activity pieces include ‘Unsure Who/What to Worship?’ The reader is invited to close their eyes and stick a pin into a chart including Tom Cruise, Nothing, Cthulhu, and author of The God Delusion Richard Dawkins. Towards the end of the book there’s a cut-out-and-carry pro-forma: ‘In the event of my death I would like to be immortalised with (tick one box)’: Heroic Statue, Spooky Tree, Network of Secret Tunnels, and so on.

Gauld studied at the prestigious Royal College of Art, so be assured he’s chosen and cultivated this minimal style. Figures are reduced mostly to icons, a dot for the head, on a bottom-heavy torso, they’re like chess pawns (or, Gauld might say, pieces from Cluedo) atop stick figure legs. Realistic or heavily rendered art would just be cumbersome and distracting.

While the most common subject here is fiction, these pieces are more like poetry, the art being in the distillation, exactitude and wit of expression.

It’s easy to plough through this $20 hardback quickly, indeed while waiting on a bus, but you could come back to these cartoons for years to come and likely still find them both insightful and hilarious.