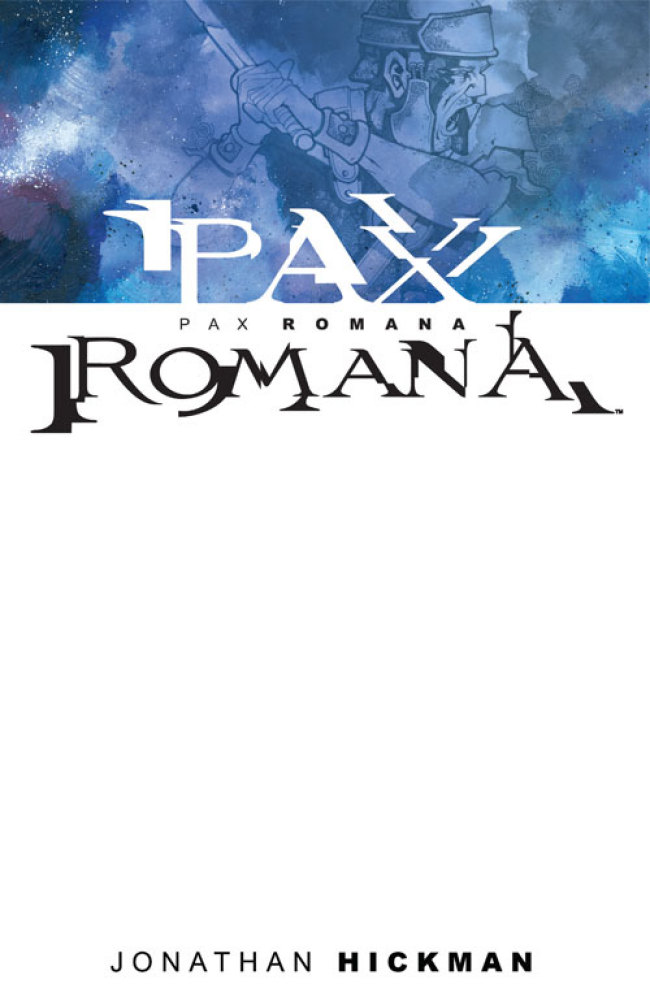 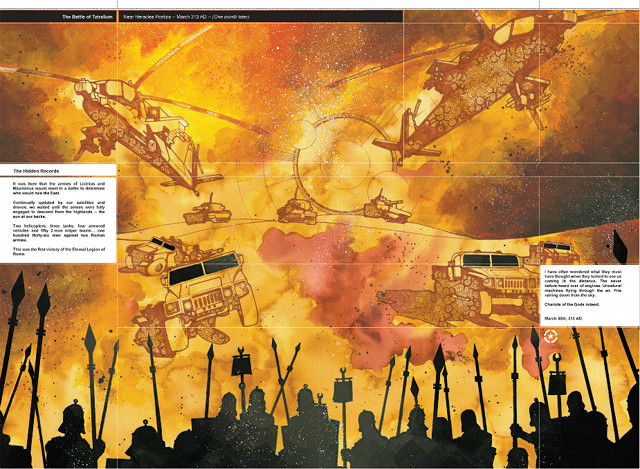 There is an immense ambition here as Jonathan Hickman tries, literally, to rewrite history. He writes, draws, colours and letters Pax Romana. It represents one of his earliest forays into the comic world, created before he become a pillar of Marvel’s comic universe, penning universe threatening and altering events such Secret Wars. He is a writer of ideas possessing an arresting visual style, though the static and stylised nature of the art may dissuade the risk averse.

Pax Romana is an alternate history story. This is reasonably common to science fiction writing, yet Hickman’s sociological and philosophical exploration of the nature of mankind is presented in a fresh and arresting manner. This is far from being a traditional comic with a standard page layout – Hickman, following on from the more experimental Nightly News, uses a myriad of successful storytelling techniques, presenting us with pages which are huge swathes of text, transcripts, maps and infographics in a brave, challenging experiment. Despite only occupying four chapters, readers will have to invest time to work through this convoluted tale, though it is well worth the sacrifice.

The story is set in the near future where, controversially, Islam has become the dominant world religion and Catholicism, diminished, is under threat. Science has advanced and people are genetically enhanced to live longer. The Church has secretly embraced its old sparring partner, science, leading to a breakthrough in time travel technology. The Pope believes that it is time to fix the world (in favour of his belief system obviously) and sends a team back to 312 AD, a point in mankind’s development when the Church was blossoming as the planet’s dominant ideology under the aegis of Constantine the Great. The time team consists of a holy man and soldiers, armed with the advanced weaponry of modern warfare, a detailed knowledge of history and an ideological drive to make the world “better.”

Unsurprisingly, this attempt to re-engineer history doesn’t work out as planned. Hickman uses the clever narrative device of having the bio-engineered Gene Pope relate this secret history to the Holy Roman Emperor, a young boy, allowing for moments of sly humour amidst the didacticism. This talky device works very well and allows Hickman to encompass the whole retconned timeline in a manageable fashion.

Good science fiction is never about the future, but a reflection on the now. Hickman’s rewritten history speaks to us about our politics and social structures as he explores the differing ideological systems of our past and present. Niccolo Machiavelli was condemned by history for demystifying the mechanics of political science power in The Prince – Hickman is a attempting something similarly daring in Pax Romana and, while it never quite fulfils the scope and scale of its ambitions, it is an intelligent, astute, layered and successful narrative. Hickman promised to return to this alternate history and it would be a shame if readers never had the chance to tour through the reconstructed corridors of history again with him.