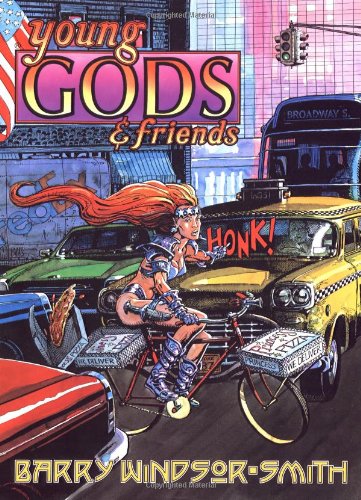 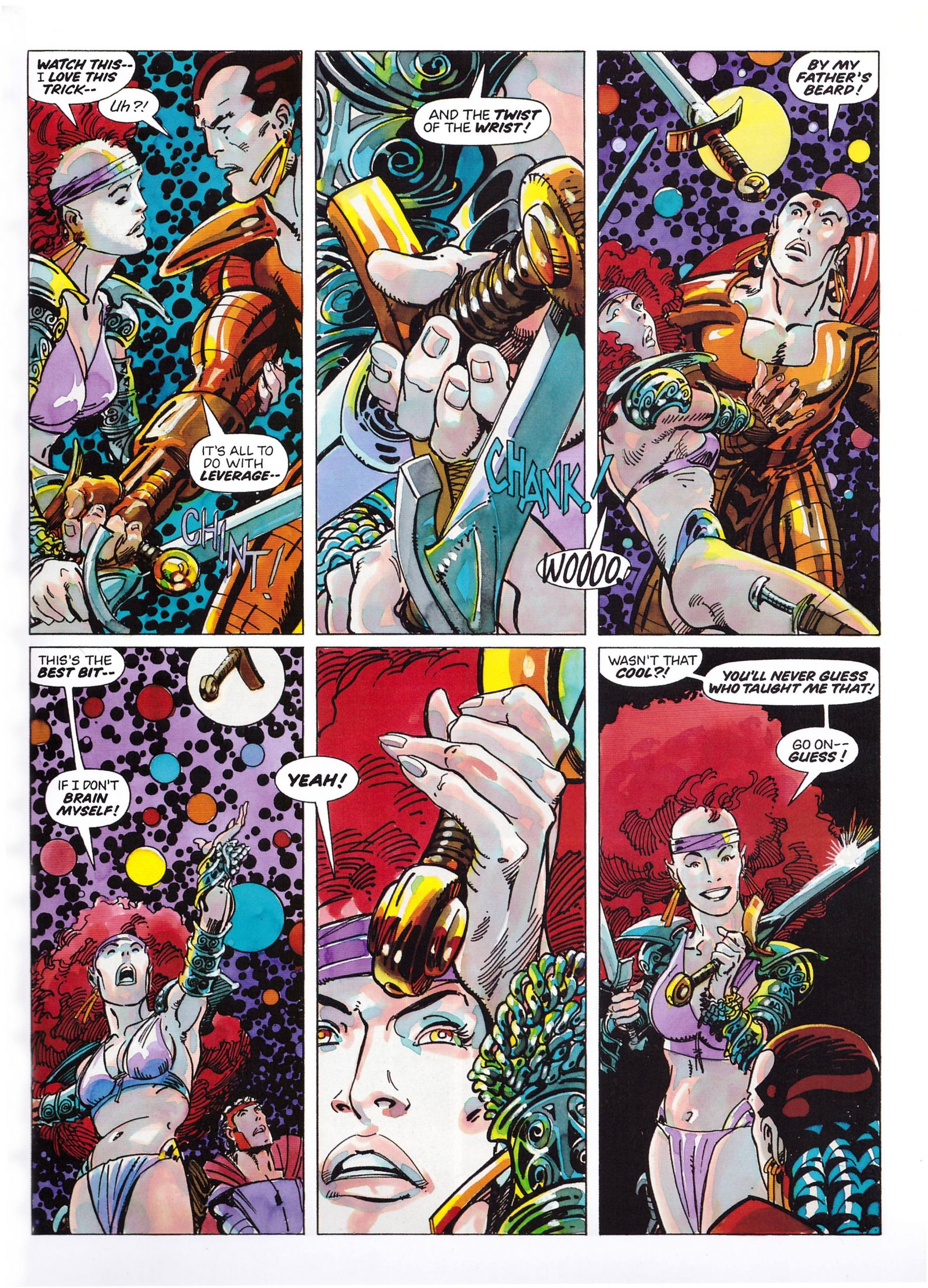 In terms of comics, the 1990s were incredibly fertile years for Barry Windsor-Smith. It’s likely the total pages created exceed his post-Conan 1970s work and 1980s work combined. The difference was that in the 1990s Windsor-Smith wrote his own stories, and the perception of him completely altered. A previously coy sense of humour – the placement of a Marmite jar amid the baroque background splendour of a painting – came to the fore. Take the Young Gods. The tradition in comics, myth and literature is of Gods being distant, unknowable beings of abundant power. Windsor-Smith opens The Young Gods with an extended sequence of Adastra working for a pizza delivery service, tormenting an even younger God with her imaginative coarseness. The whimsy apart, God-like behaviour is minimised.

Revelatory the sense of humour may be, but it’s for his art that Windsor-Smith is cherished, and these are prime pages, heart and soul poured into the recreation of celestial splendour. That’s the obvious, but what’s not obvious until studied is how nuanced the characters are visually, how they say something with a look, or even a pose. Young Gods isn’t material high on story subtlety, yet that’s still apparent in a contrite Adastra and the thoughtful, dull Heros, his mind always assessing protocol. Much more than most comic artists, Windsor-Smith loves a figure study. The opening pages of the first chapter are almost nothing but, and they look magnificent. However, unusually for Windsor-Smith, the colour is often unsympathetic, too bright and varied, and so detracting from a focus in individual panels.

A fair time is spent introducing the three main characters, which is perhaps a little too thorough for establishing the day to day life of the Gods being mind-numbingly dull, and that Heros could loosen up a little. What better time to have an adventure than the night before his wedding? It doesn’t pan out as planned, instead leading to a strange intrusion from the artist, a discussion with the cast as if he’s directing a play and quibbling with interpretation. The next chapter then reboots as per the discussion. The trick is not to become too hung up on any plot, enjoy the conversations and admire the art as the cast is increased and fleshed out.

The Young Gods originated as one of three features in a series of magazine-sized comics titled Barry Windsor-Smith Storyteller. Windsor-Smith will tell you at length about how that worked out for him in the text pages, and nice though that format was, this is better. The reproduction is sharper, restoring linework and detail, and while Windsor-Smith explains why the story remains unfinished, this edition presents twelve previously unpublished pages taking it further, along with a text synopsis of how it was intended to pan out. That’s in addition to the 26 new pages forming the pizza sequence, 18 pages of a party uniting all the Storyteller characters and 15 more featuring fragments either excised from the earlier material or a stillborn earlier incarnation of Young Gods. These include some phenomenal looking pages, but Windsor-Smith notes why he felt they didn’t work. According to your own viewpoint this will either be evidence of absolute dedication to his art, or a creator over-thinking things. Ultimately it’s what separates him from plenty of artists who think “that’ll do”.

Because Young Gods & Friends is so discursive and whimsical, it doesn’t really matter whether the story is finished, as there’s enough wonder present to satisfy. Besides, the great show business maxim is always to leave folk wanting more.