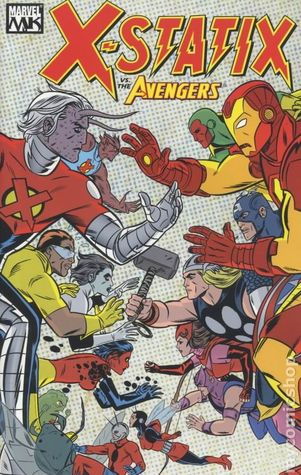 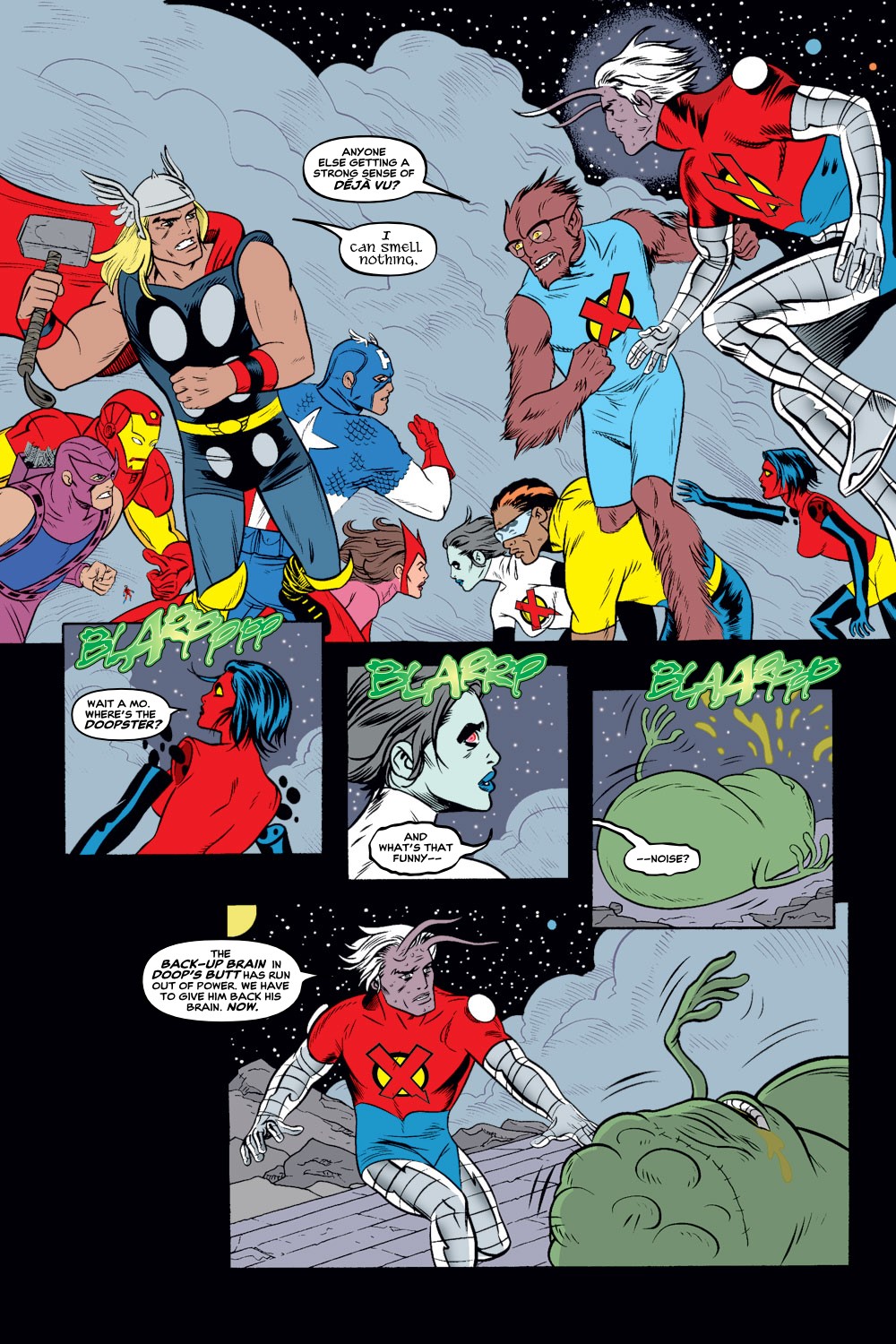 Continuing from Back From The Dead, this final volume of the X-Statix gets off to a shaky start with a spotlight on the Vivisector’s search for a cure for his mutant condition, despite the onslaught of contradictory advice from his teammates and other interested parties. Given Vivisector’s sexuality, there is obviously some sort of ham-fisted parallel between his quest for normalcy and the controversy surrounding various ‘cures for gay’ highlighted in the media at the time, but it comes across as rather muddled, not assisted by the scratchy, flailing art of guest illustrator Nick Dragotta.

Fortunately, this is soon done with, and we move to the main event. Our venal, celebrity-obsessed heroes find themselves in direct competition with the Marvel Universe’s A-listers, as the brain of their snotlike floating incomprehensible ally, Doop, is stolen and hidden in various locations, and the X-Statix find themselves up against the Avengers! Having observed, and despaired of, X-Statix’s antics, the Avengers  have decided to move in now the stakes have raised.

In a series of bouts reminiscent of the Avengers/Defenders War, each of our hero teams is paired off, vying for supremacy in increasingly ludicrous situations to win pieces of the missing brain. Watch the Scarlet Witch and Dead Girl take a bath in toxic goop! See Hawkeye and the Vivisector flirt relentlessly! Bear uneasy witness as Iron Man and the Orphan battle naked! The absurdities pile up, but in the end, the X-Statix acquit themselves creditably, winning the grudging respect of Earth’s Mightiest Heroes.

After this comparatively light and frothy escapade, the narrative changes tone, as we’re treated in media res to the team’s final moments. We see in flashback see how their final battle comes to pass, as their luck runs out, and the consistently high body count of the X-Force/X-Statix franchise reaches its inevitable conclusion. Despite knowing all along that this was the most likely outcome, one can’t help but feel a pang as our celebutante heroes face the final curtain – always with concern for their best camera angle! It’s wistful, but appropriate, and a wise decision to wrap up the series before the concept wore out its welcome.

A coda, of sorts, followed a couple of years later, with X-Statix Presents: Dead Girl, and all X-Statix material is collected in the X-Statix Omnibus.