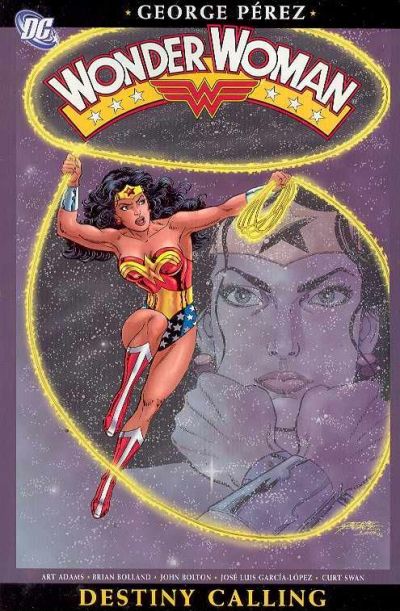 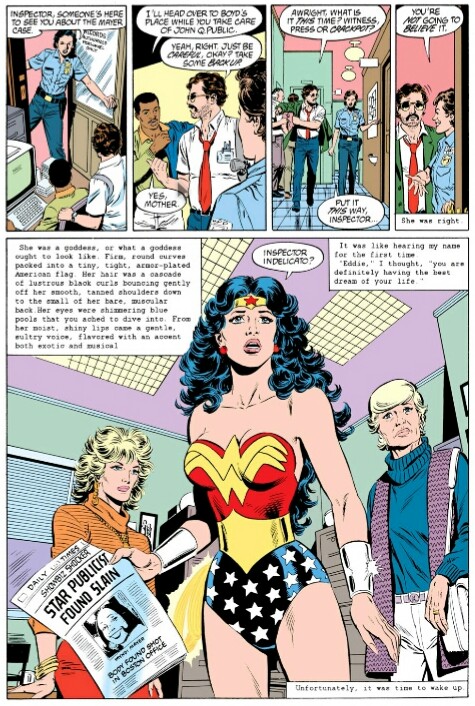 After the relative disappointment of Beauty and the Beasts, Destiny Calling marks something of a return to form for George Pérez’s Wonder Woman. More sympathetic inkers such as Bob McLeod applied their talents to Pérez’s looser pencils (see sample image), and Pérez seems to have rediscovered a sense of purpose in what he is attempting to do with Wonder Woman.

The opening tale, ‘Who Killed Myndi Mayer?’ is a minor classic, dealing with some pretty adult themes, and the mythological/monster adventures that fill out the rest of the volume are a step up from those in the previous volume, if not as good as Pérez’s first year. After his initial scripting wobbles, he’s much more confident with the words here.

DC’s continuing confidence in the series was shown by granting it an Annual. Pérez was stretched to his limits as an artist, and so the Annual is almost entirely pencilled by others, including a couple of pages from Brian Bolland, though Pérez inks Ross Andru, and pencils and inks a short story about Myndi Mayer’s will. This is a series of low-key episodes, of which the afore-mentioned Myndi Mayer story carries most emotional weight. Pérez also shows that he hasn’t completely forgotten Steve Trevor and Etta Candy.

The curse of the crossover arises with a page setting up the big DC Invasion! event of 1988, and some pages that actually tie in with the ‘Who Is Wonder Girl?’ story in New Titans, which Pérez was drawing at the time. Out of context, these are barely comprehensible.

Unable to earn royalties from Wonder Woman, after the last issue included here, Pérez stopped drawing Wonder Woman, and returned to the more lucrative task of drawing New Titans, though he continued to write Wonder Woman for the next three years. The material in Destiny Calling can also be found in Wonder Woman by George Pérez Omnibus, volume one.