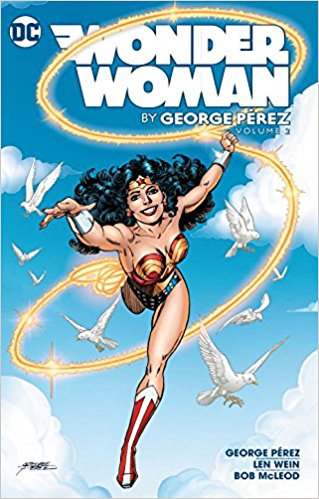 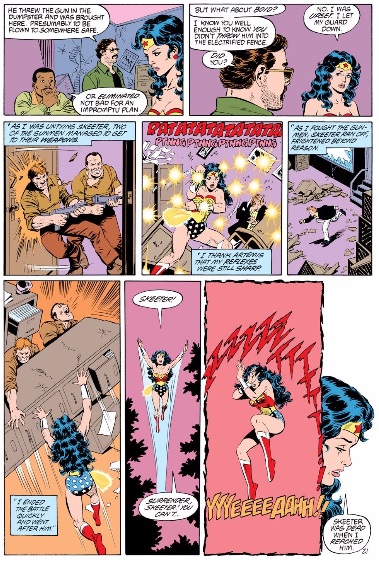 This second collection of the period where George Pérez was both writing and drawing Wonder Woman is a step down from volume one, but it remains superior and, for the immediate post-Watchmen period, surprisingly sunny superhero fare.

Pérez’s second year on the comic (1988-1989) undoubtedly stutters at the outset, for a number of reasons. Financial pressures on Pérez meant that he needed to take on more work, and could therefore  no longer spend as much time producing the detailed pencils that he so obviously loved. The loss of inker Bruce Patterson removed a sympathetic collaborator, and it was a while before a suitable replacement was found in the form of Bob McLeod (see featured image). Pérez also chose this point to begin scripting as well as plotting the book, and he is a little uncertain with the words at first. Most importantly, Pérez looks to have temporarily run out of ideas, and spends the first half of this volume repeating what he did in the first year. Still, nothing here is as bad as a contemporary Superman/Wonder Woman team-up in Action Comics that Pérez illustrated from a John Byrne script and layouts, and which is fortunately omitted from this volume.

Things do pick up halfway through, and ‘Who Killed Myndi Meyer?’ is a minor classic. The following Hermes story seems a bit unlikely, but it’s not bad, and an Annual, drawn by a diverse selection of artists, highlights Pérez’s ability to write low-key episodes with emotional punch. There’s even a brief return for Steve Trevor and Etta Candy, mostly dropped from Pérez’s run in favour of his own creations, archaeologist Julia Kapatelis and her daughter Vanessa.

Definitely worth a purchase. These comics had previously been collected in two volumes, as Beauty and the Beasts and Destiny Calling, and can also be found, along with Pérez’s first year, in Wonder Woman by George Pérez Omnibus, volume one. ‘Who Killed Myndi Meyer?’ is also in Wonder Woman: The Greatest Stories Ever Told, though it is less effective there when taken out of context.