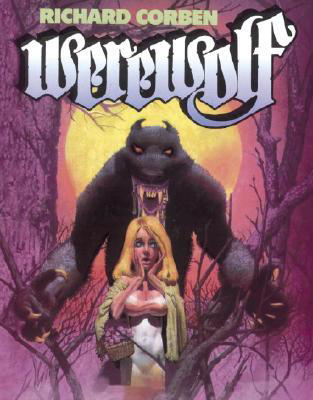 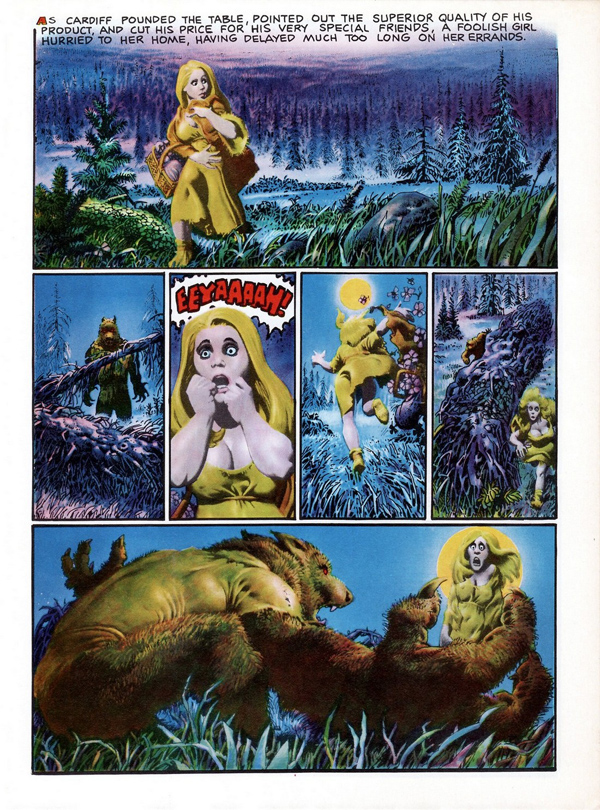 Giving lie to the old chestnut about never judging a book by its cover, the front cover of Werewolf gives us a very good idea indeed of what we can expect of this Richard Corben anthology: beautifully drawn werewolves and buxom wenches by one of the undisputed masters of drawing both.

‘Dead Hill’ is a very early story. It’s rough and ready, and the lettering is poor even by Corben’s standards. However, there are flashes of the nascent talent that would see him become one of the premier illustrators of his generation.

Next we have the book’s longest story, at 25 pages. ‘The Beast of Wolfton’ looks like Hal Foster’s Prince Valiant mixed with a Universal monster movie. The writing is poor, and the cod medieval dialogue is staggeringly unconvincing, though there’s much to admire in the artwork. It’s followed by ‘The Spirit of the Beast’, a sequel of sorts, featuring the child of our lycanthropic hero from the previous story.

‘Roda and the Wolf’ reworks Little Red Riding Hood in eight pages. Corben elects to use an invented language, a trick he repeated for Children of Fire. It was a pain in the ass then, and it’s a pain in the ass now, though the artwork is very nice.

The following two stories, produced for Warren’s Creepy magazine, are the undisputed highlights of this collection, and the artwork for both is truly outstanding, sustaining tension and horror. Corben deservedly won his first Warren Best Artist/Writer Award for ‘Lycanklutz’, and ‘Change… into Something Comfortable’, written by Doug Moench, is excellent too. That werewolf is clearly modelled on Lon Chaney Jnr’s The Wolf Man, though it should be noted that Corben is just as adept at depicting werewolves that range from hirsute men to bloody terrifying monsters more beast than man, as the front cover demonstrates.

The closing ‘Fur Trade’, is an unremarkable eight-pages written by John Pocsik, who resorts to an awful pun for the finale. Corben, as always, elevates the tale above many of the weaknesses in the writing.

In these days of Photoshop, Manga Studio and superb printing, it’s hard to remember how groundbreaking Corben’s work was during the 1970s and 1980s. As he grew to prominence, his style would have a strong and obvious influence over a generation of artists, particularly through his work for Heavy Metal. No less a figure than Will Eisner noted that Corben “experiments, acknowledges no rules, uses photographs, hand wrought separations, makes his own technology, seizes on any tool and emerges with stunning realism.”

This book is a good sampling of the work of a master. Much of the writing is weaker than the artwork, but the artwork is about as good as it gets. And as for that cover mentioned at the start of this review: absolutely gorgeous, and worth the cost of the book on its own.