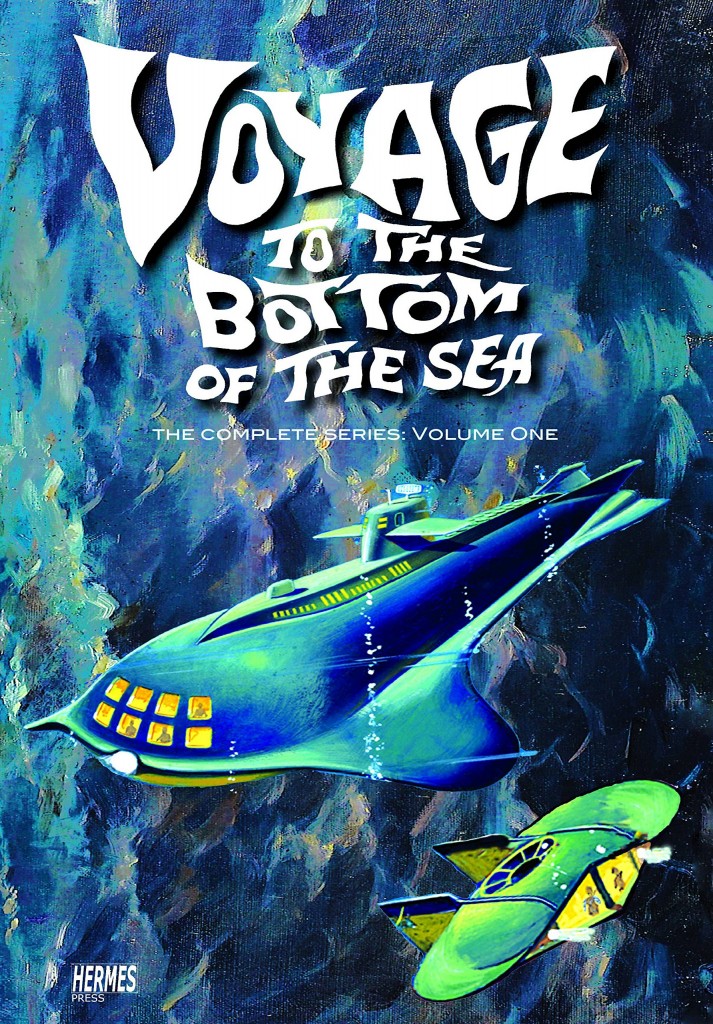 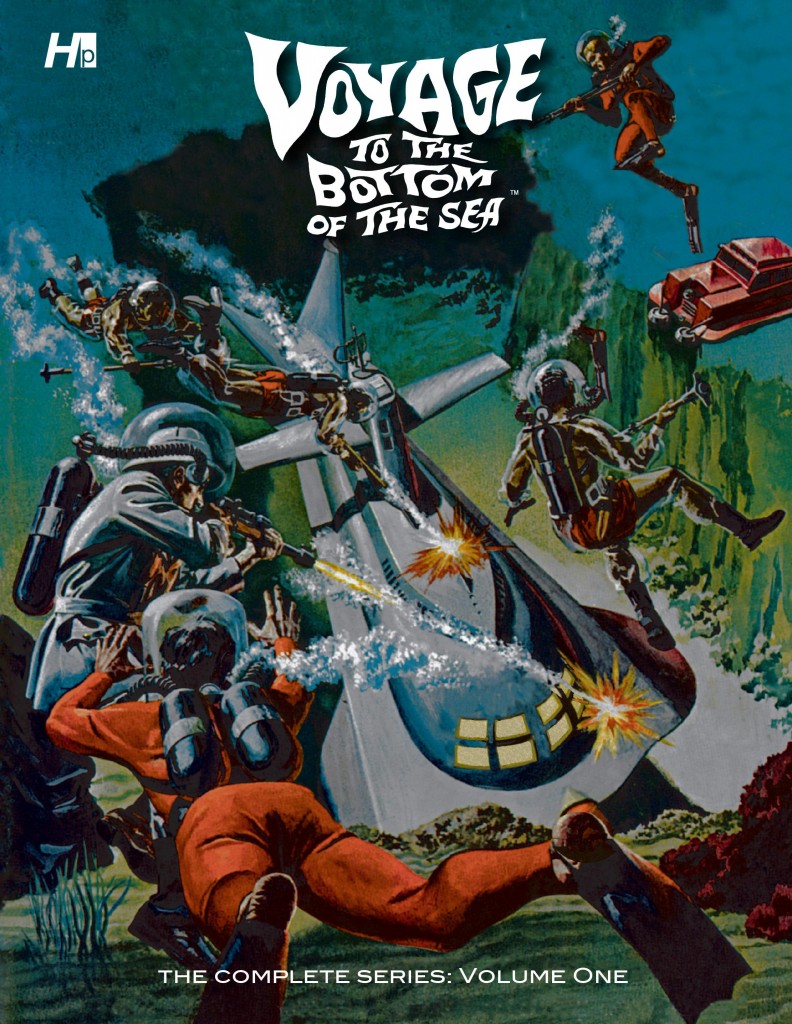 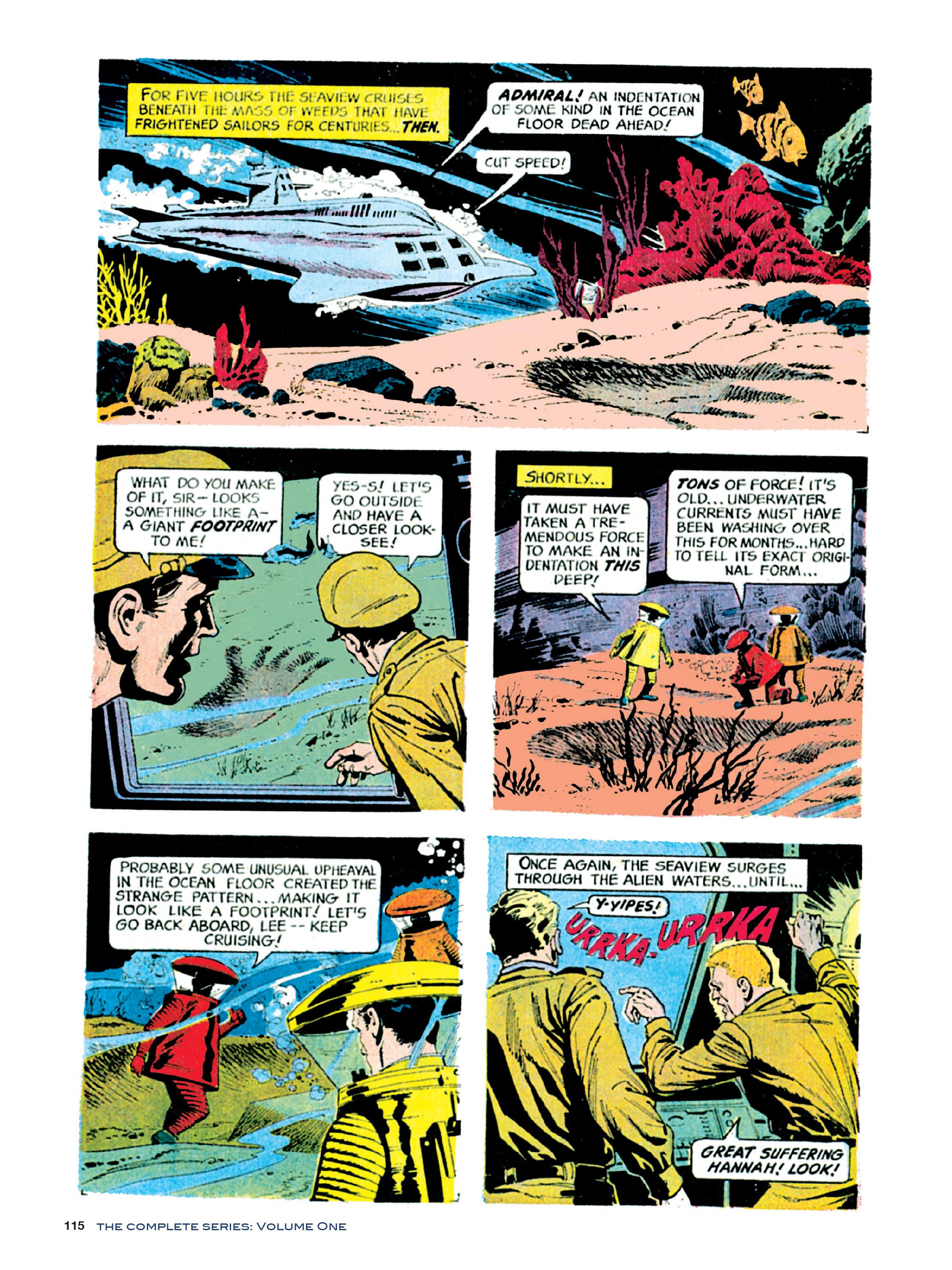 TV producer Irwin Allen had an unerring commercial touch in the 1960s, producing series after series that connected with the public and provided prime time family entertainment with a slight science-fiction twist. He was also very aware of the importance of marketing his shows, and ensured that a range of associated merchandise was available. This included comics, always produced by Gold Key, whose titles emphasised their wholesome content. They also had eccentric production methods, a trademark being panels without borders on their pages, which looks surprisingly odd. This is balanced by a preference for painted covers to their material, and George Wilson’s compositions for Voyage to the Bottom of the Sea more than do their job of enticing readers to purchase.

The series started life as a movie, before transferring to the small screen three years later. The allure wasn’t the cast, but the Seaview, “the world’s first non-military nuclear submarine”, bestowed with an eccentric design that stands the test of time. It’s not the only impressive piece of undersea construction. Doctor Gamma, the opening tale’s villain, has a hideout fused to rocks beneath the sea, and the next story has diving suits modelled on the heads of plastic drawing pins.

As far as anyone can ascertain, all these stories were written by Dick Wood or Marshall McClintock, and they adhere resolutely to the TV template of plot taking precedence over all but the most basic personality traits, but the plots are imaginative and occasionally unpredictable. They concern Bond-like villains with a preference for underwater infamy, portals releasing ancient monsters, an undersea giant, and even an undersea big game hunter (“The Seaview has fallen prey to my animal trap! Puncture her ballast tanks! Quickly! Puncture the beast and I will administer the kill!”). It may sound silly, but it’s no sillier than the British boys adventure comics of the era, and while formulaic, the suspense is always credibly perpetuated. Furthermore the lack of a restrictive special effects budget applied to the TV show enables the artists to create a persuasive undersea world largely absent on the small screen. The best tale predates the Fitzcarraldo movie by a decade as it becomes necessary to move the Seaview across land by muscle power and ingenuity alone.

None of the artists involved were fan favourites at the time, but all emerge with credit. They discipline themselves to the formula, can all tell a story, and Mike Sekowsky’s stylistic eccentricities are sublimated for a 1960s modernistic precision with hints of Carmine Infantino about it. Don Heck thrives without having to draw superheroes, George Tuska could still draw a background and Alberto Giolitti, artists for the final three tales, supplies the greatest sense of spectacle and action. That’s occasionally let down with a panel maximising dramatic convenience at the cost of the reality otherwise maintained throughout.

This was the first of the Hermes Press TV title reprints, and the content is among the best of them, something acknowledged in the 1960s as the series requires a second book to complete it. These stories are admirably varied and still entertain, although whether they entertain enough to convince purchase of a hardcover collection is another matter.