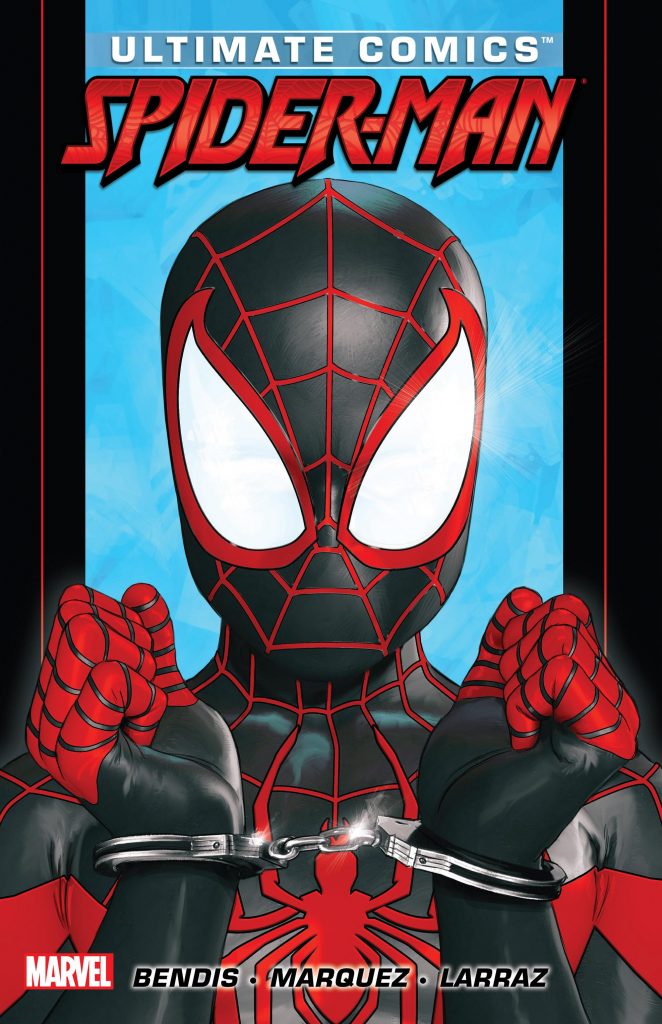 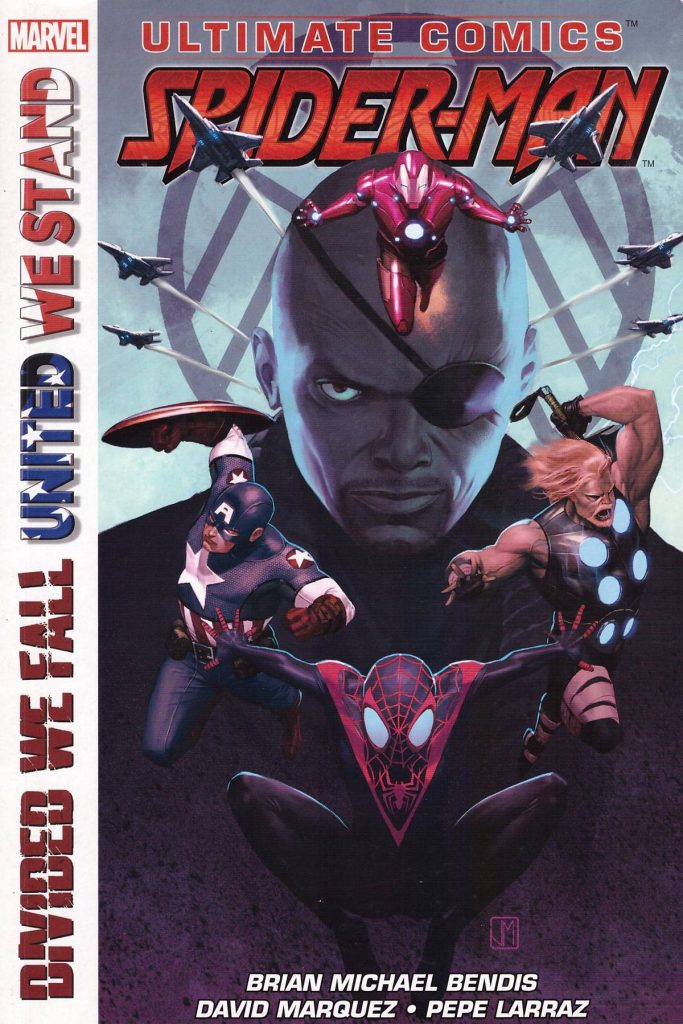 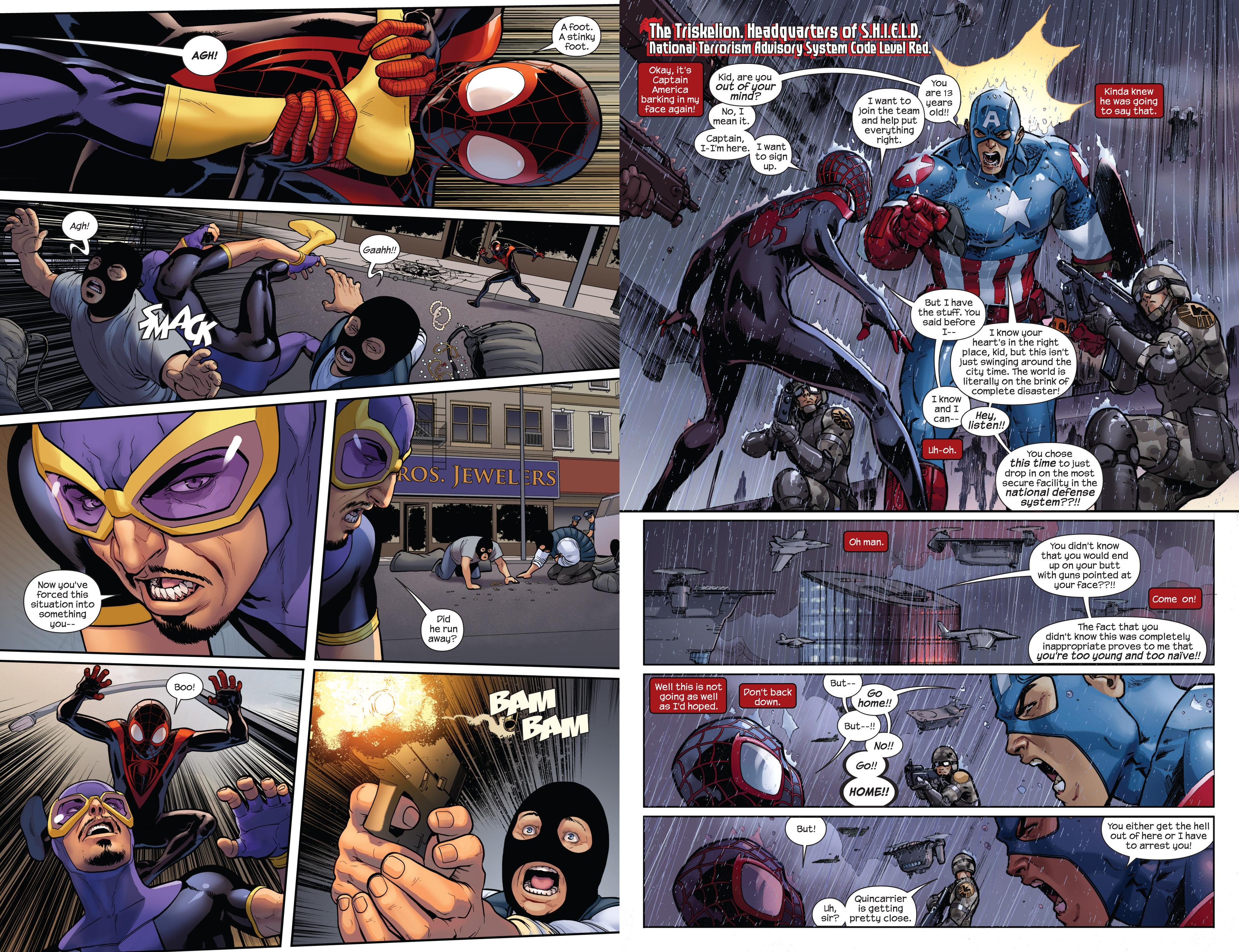 An absolute joy of what Brian Michael Bendis has done with this version of Ultimate Spider-Man is is to incorporate the influence of an uncle, so fundamental to Peter Parker’s outlook, yet brilliantly twisted for Miles Morales. He’s grown up liking his Uncle Aaron, unaware that he’s also a criminal, the Prowler. As of the end of volume two, each now knows the truth about the other’s costumed activities, and while Aaron is prepared to act as a mentor to the new Spider-Man, Bendis makes readers aware there’s signficant self-interest involved. Character construction on that level provides Miles Morales’ adventures with a depth, and it extends to other people seen. Bendis’ new version of the Scorpion is wonderful, monumentally egotistical and brutal, and Miles himself has a wonderful naive streak as he’s thrown into a world he can cope with physically, but is way out of his depth mentally.

Bendis constructs the series around Miles. While other people are seen in teaser and set-up scenes, Miles or Spider-Man feature in 90% of the content, and in terms of the story being told, the scenes out of costume are as important as those in it. From conversations with his nerdy and sometimes misguided, but super-supportive mate Ganke to concerns about revealing the truthabout what he’s become to his parents, Miles is an utterly convincing thirteen year old. To pick one excellent non-action scene, there’s a wonderful passing of the torch sequence involving those close to Peter Parker.

David Marquez has settled well into the role of regular artist, and is slightly better than fill-in replacement Pepe Larraz at presenting a realistic thirteen year old in costume, while both are good at the personal moments. Neither has any problems with the action scenes, Larraz’s content largely confined to them, and this is another collection featuring page after page of really good superhero art.

Much of the collection’s second half extensively broadens Spider-Man’s world, as he first meets Captain America, then plays a part in a story crossing over into various other series at the time, in which Hydra takes over much of the USA. Bendis keeps the intrusions to a minimum. These chapters don’t slot into other titles, they keep Spider-Man central and detail his involvement in events. However, the compelling touch that prevents this being just another superhero slugfest is how Bendis humanises the conflict by contrasting the widescreen moments with something that personally affects Miles. It leaves volume three as another thoroughly enjoyable read for young and old alike, and by the end Miles Morales is also a webslinger.