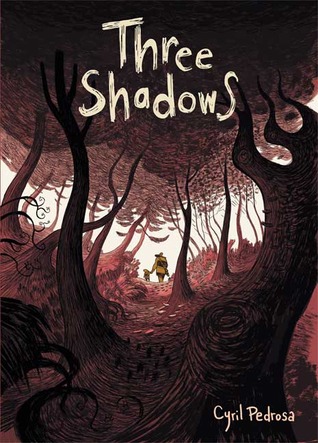 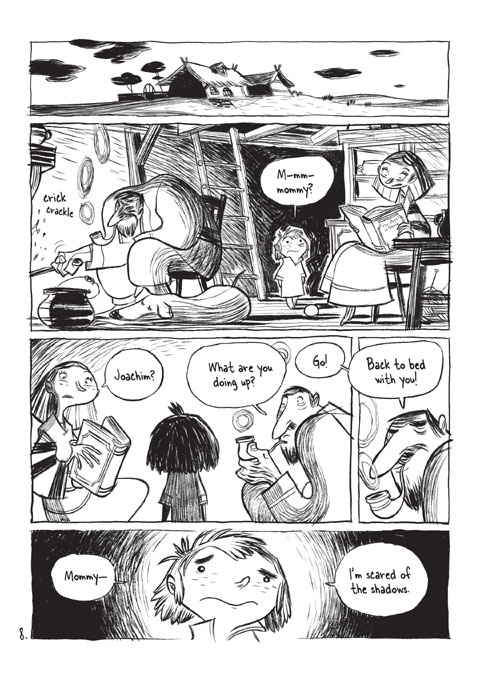 Young Joachim lives with his parents in near idyllic rustic circumstances, at least for the times. Louis and Lise are self-sustaining, hunting and setting traps in the forest, chopping down the firewood they need and have a dog for protection, also providing companionship for Joachim. Everything changes when three hooded strangers on horseback appear. They’re dark and indistinct, and keep their distance, avoiding all attempts at direct contact, but maintain a foreboding presence.

Three Shadows is set in an approximate 18th century, complete with the social structures and superstitions of the era, and Lise is told it’s likely the horsemen have come for Joachim. There’s no basis for this other than belief in the source, yet Lise is passive and accepting, while Louis is determined to thwart fate.

Cyril Pedrosa’s storytelling approach is to create and sustain tension. The Shadows inspire fear by their mere presence without ever committing any aggressive or deliberately furtive act, indicating they’re a metaphor for disease, to which children are more prone than adults. The remainder of the book is concerned with the lengths a parent will go to and the hardships they’ll endure to protect their child. This protective instinct we have for loved ones is underlined later in the book with regard to an elderly couple.

Pedrosa’s art style has similarities with that of Scott Morse, although less abstract. His figures are exaggerated, but have a floating lightness to them, and they’re rounded and loose, conveying movement extremely well. He’s also very strong when it comes to emotional characterisation, the bond Joachim has with his parents, and a festering, and justified, hatred later in the book.

For all the accomplished cartooning and powerful emotional subtext, though, and its selection as an essential graphic novel for the 2008 Angoulême Comics Festival, Three Shadows isn’t an entirely compelling read. The pacing is at times extremely leisurely, and whimsical intrusions puzzle. At one point Louis has a conversation with a sailor over a couple of pages, with the sailor concerned about his finely embroidered jacket, an interlude lacking further narrative purpose, so just filling pages. The concluding sequence is also odd, set in pre-revolutionary France, and while detailing a necessary redemption, it’s a strange switch of focus that might almost be an entirely different tale.

Those entranced by Pedrosa’s cartooning and able to go with the flow of his storytelling will experience greater rewards than those whose mindset is more literal.