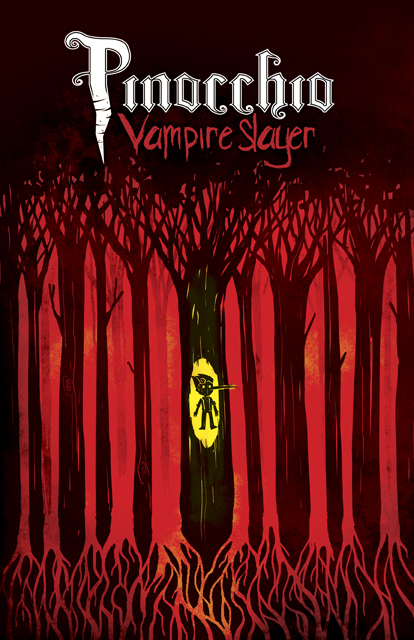 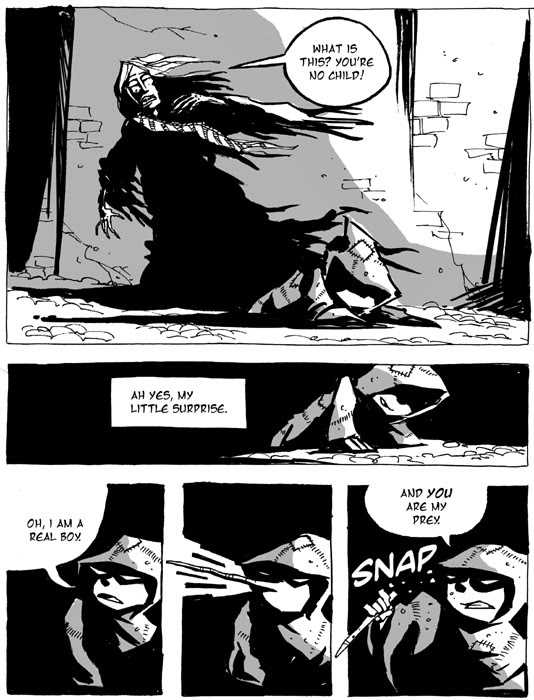 There are some titles that are plain attention grabbers, and this has the bonus of an inbuilt chuckle to boot. The book began with a single cartoon produced by artist Dusty Higgins, of Pinocchio being arrested and spearing the policeman with his nose, a decent gag requiring no explanation. For Higgins, though, “That would be a lot better if the policeman was a vampire”.

A lot of projects conceived around such a gag would, in hindsight, have been better left in the pub, which seems to be the case here as we slog through a very laboured opening chapter. There’s repetition, and Higgins’ inexperience as a comic artist on display as it encompasses too many long passages only to set mood or scene. The worthwhile gags are few, and beyond the concept, surprises there are none.

Each of the three chapters was originally published as a separate graphic novel, the first bearing the same title as this compilation, and the others subtitled after the chapter names ‘The Great Puppet Theater’ and ‘Of Wood and Blood’. Lacklustre it may be, but something about the opening chapter struck a chord on original publication. This is just as well, since there’s a massive improvement in ‘The Great Puppet Theater’.

Carlotta, who’s always had a crush on Pinocchio, sets off in search of him and instead meets a bunch of similarly animated wooden people, also in the business of vampire slaying. Were Higgins’ art not so distinctive you’d swear this is the work of different creators such is the improvement. Van Jensen’s script delivers tension, excitement and unforeseen plot developments, and Higgins comes to the realisation that pages can be better if they’re not just figures and the sketchiest of backgrounds. He’s also really developed into a storyteller here. Any wasted pages are due to the writing, an adaptation of The Merchant of Venice, puzzlingly extended being one example.

Jensen and Higgins take their inspiration from Carlo Collodi’s original dark and frankly nutty novel rather than any number of children’s books and animations based on it. It’s a dark work, and one of surreal strangeness, offering plenty of opportunities for rum goings on, and almost the entire cast is pulled from it. Some are modified, the fox and the cat serving a higher purpose, but there’s very little shoehorning required to introduce vampires. Neither is the seeping in of comic style continuity and an explanation for magical events intrusive. In fact, it’s clever and well slotted-in, down to the manner in which one inconvenience is discarded as “just a fairy tale”.

By the time we hit the third chapter the creators are really flying the flag. Jensen and Higgins have a clear focus and end point, and this coming of age story has elements of poignancy and tragedy as Pinocchio had developed well beyond his original portrayal here. He’s no longer the angry young man railing against fate, but someone who controls his own destiny, all the way to the surprising and moving conclusion. Other humour also has a place. When one character suggest singing another starts up with “When you wish upon a star…” only to be told to shut up.

This isn’t “perfect” as one back cover quote has it, but three-quarters of Pinocchio Vampire Slayer is a lot of fun and a cracking adventure story.