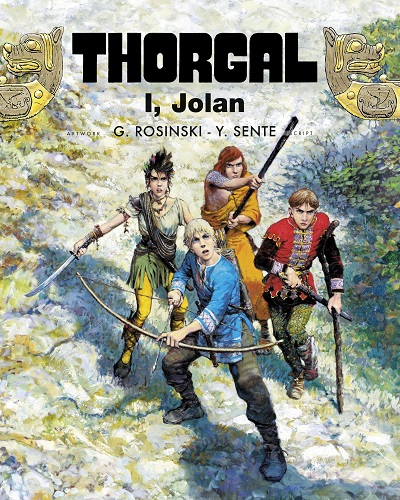 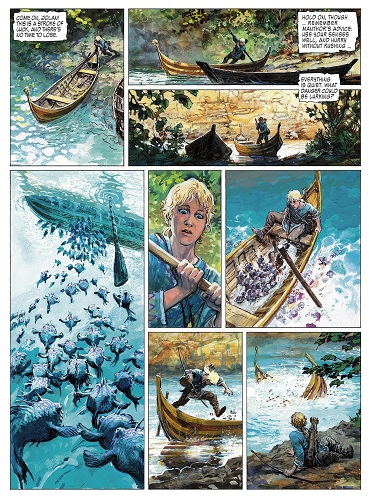 To save Thorgal Aegirson’s life, his son Jolan made a deal with the mage Manthor (The Sacrifice). To honour that agreement Jolan must leave his family and begin a period of servitude as the magician’s apprentice. What seemed a straightforward arrangement isn’t, as Manthor’s agenda is concealed by partial truths. Firstly, Jolan must prove his worth by traveling the Betwixt, the realm between the worlds of Midgard and Asgard, before passing a test. Except four other uniquely talented youngsters are vying for the privilege of being the mage’s apprentice and this is more a competition than it is a test. Jolan’s death, accidental or otherwise, is merely a stepping stone on the path to victory.

Jean Van Hamme’s work with artist Grzegorz Rosinski on their fantasy series Thorgal has been incredibly influential on European comics, one of the most successful and popular titles for its French publishers Lombard. It has won its creators multiple awards and has been credited for popularising comics in Rosinki’s homeland of Poland. Anyone inheriting Van Hamme’s pen could be forgiven for feeling a weight of responsibility.

Fortunately for fans, Yves Sente was the inheritor, having already garnered a reputation for reinvigorating Edgar P. Jacobs’ The Adventures of Blake and Mortimer and previously collaborated with Rosinski on The Revenge of Count Skarbek. If he feels pressure Sente never shows it in his writing, focusing primarily on the character of Jolan while introducing a new cast and new ideas that will gradually take the saga in a new direction. The result is that I, Jolan feels fresh, his intriguing plot points with potential for some great future stories.

Rosinski isn’t the artist he was, around 65 years old here with age and time starting to take their toll. A close look at his pages reveals little inconsistencies and less detail, but even on a bad day, Rosinski is still a great worker focusing on his strengths to produce some beautifully elegant panels. His choice of palette captures the dawning day or the ominous glow of a cauldron as well as it ever did. Faces don’t have the same detail they once had, nor do the cast move as vibrantly yet Rosinski can still render a crowd populated with unique individuals, while the cast’s strengths and flaws are convincing. It’s illustrating the plethora of strange creatures and natural dangers Jolan and his companions face where Rosinski still shines (see sample), the scenarios feeling dangerous with a flashback sequence reminding us of Jolan’s importance to the saga.

I, Jolan is a good story and feels original despite the already considerable catalogue. The crux of Thorgal is that he is a man tested by the gods for his unusual heritage, and Sente makes it clear there is more to come. Jolan continues to take control of his own fate while Thorgal and Aaricia face tragedy in Thorgal: Thor’s Shield. 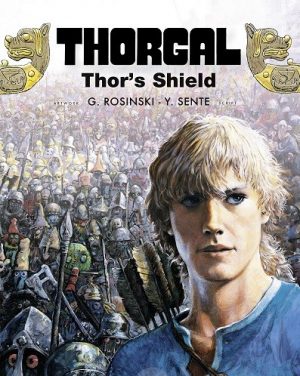