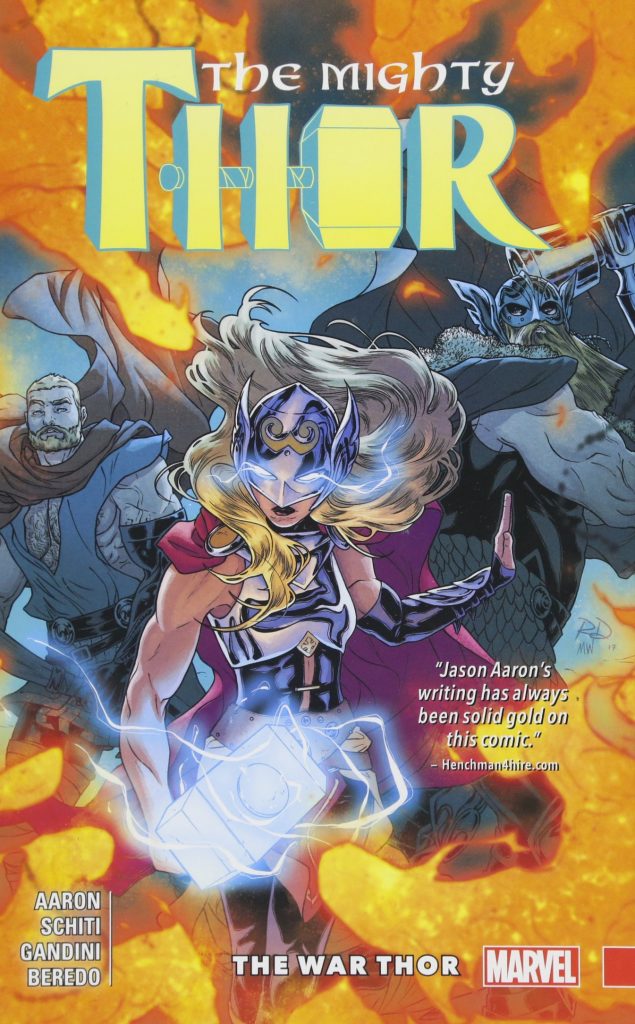 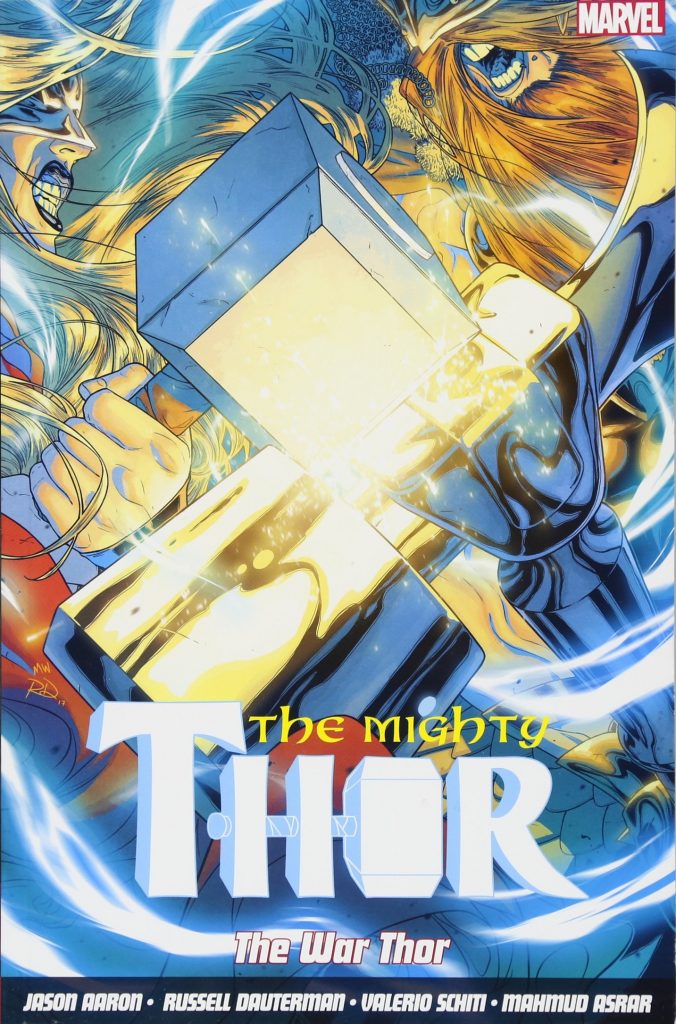 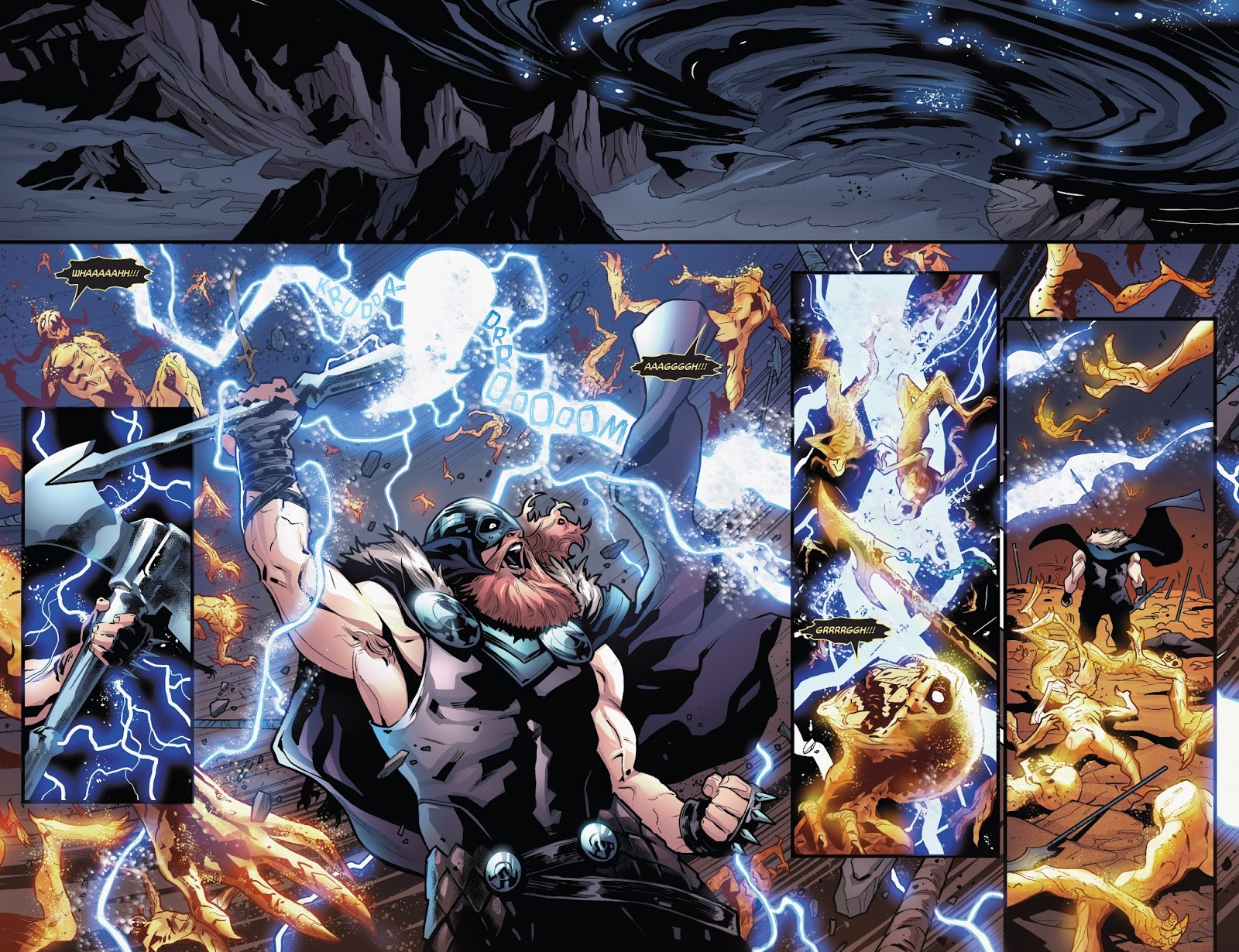 So why the War Thor? Well, a foundation of Jason Aaron’s writing on Thor has been the inscription on Thor’s hammer that anyone can have the power of Thor provided they’re worthy. It’s led to Jane Foster being the Thor of this series, and introduces another Thor as the attacks on the ten worlds spreading from the roots of Asgard’s sacred tree are escalated.

The sly humour of The Asgard/Shi’ar War is gone as Dark Elf Malekith sends his forces to attack other worlds and abject misery ensues. For many years the obese Volstagg has been a figure of fun in Thor, his appetite ceaseless and his claims of glory generally taken as hollow boasting. It’s been suggested that he’s a coward, not a warrior, but crucially, this hasn’t been tested in any significant manner. Aaron weaves his plot around this compellingly, drawing a good comparison: “The God known as Volstagg had a hunger that was legendary throughout the heavens. A hunger that could never be sated, no matter how much food he consumed. The war Thor hungers as well.”

All-out war in various locations being the theme, there’s a chance for the artist to shine. In one respect it’s a shame that it’s not Russell Dauterman for most of the book, but Valerio Schiti really lets loose along with the War Thor, producing some fantastic pages crackling with energy and selling what happens as the monumental clashes they should be. There’s also the irony that Volstagg actually more resembles the red bearded Thor of legend.

Only four chapters of the main story are included here, and they start well, but the theme of absolute power corrupting is an excuse for dragging matters on too long for what’s but an interlude in the bigger picture. Aaron’s not great with explanations either. A new hammer is an integral device, and regular Thor readers know where it originated, but anyone who’s just reading this series won’t have a clue that it’s the hammer of a now dead Thor from another world. If you want to know more, check The Unworthy Thor. He’s the guy we’ve accepted as the primary Thor at Marvel since the 1960s.

Again, a feeling that Aaron is drawing out his plots too long prevails. The opening half of the book provides an interesting interlude, but while providing stunning visual moments, the second half comes across as padding, and it’s also disappointing not to see the villain that closed the previous book. He makes it as some of Aaron’s plotlines climax in The Death of the Mighty Thor.

By way of extending what would otherwise be a four chapter book, this collection also includes the Unworthy Thor teaming with the Jane Foster Thor, the novelty being this is a battle against Apocalypse in the days of the Vikings. There’s a point to be made, and Mahmud Asrar’s art is noteworthy, but this is a slim story, however nicely told.