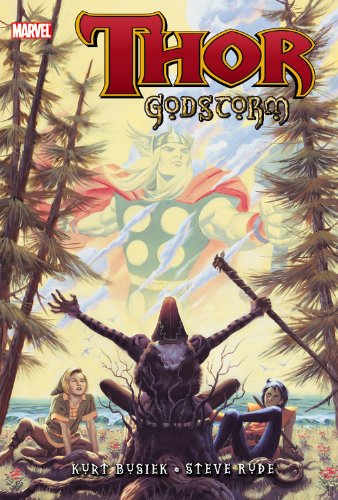 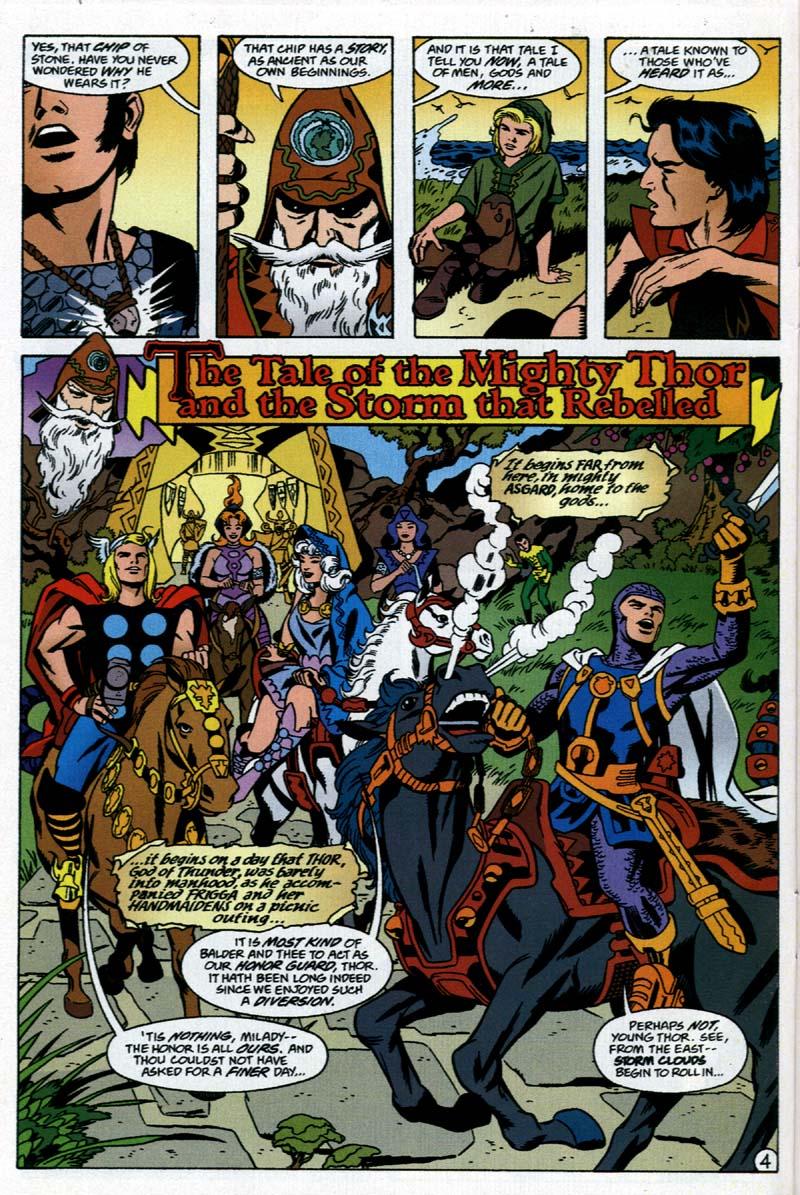 Godstorm is intended as Kurt Busiek and Steve Rude’s loving homage to Jack Kirby’s Thor comics of the 1960s, thematically linked with Rude’s other interpretations of the characters he adored in childhood. However, rather than a joyful reinterpretation, it’s an often awkward fusion of inspiration with cliché, such is the number of well worn plot devices used.

The framing material proves to be the most charming, as a couple of Viking youngsters are sat down for an instructional and aspirational lecture by a village elder, wonderfully costumed by Rude in Kirby style. He produces a series of almost religious images for these conversations, mixing in Viking iconography and Kirby’s method of the Gods addressing humans via floating head in the sky. Thor’s involvement is via Loki persuading the most powerful of storms that Thor has no respect for it. It’s all too easily done (in the manner of 1960s stories), and off we go, with Thor battling three manifestations of the storm in three different eras. The better aspects are the use of a chip from Thor’s hammer as a family heirloom, how some family traits continue through the centuries, and a delightful final page we surely all know is coming, but overall this doesn’t thrill as much as may be hoped.

It’s the faithfulness to the 1960s Marvel stories that’s Godstorm‘s weakness. The creators are in thrall to the original material, so we’re getting Kurt Busiek and Steve Rude both filtering Jack Kirby’s bombastic style, and it’s not true to either of their creative strengths. Rude is such a versatile artist that some of his own delicacy still remains when producing Kirby style layouts, but at times it reads as if Busiek is providing pastiche rather than the intended homage. “Cower Avengers! Cower before my unparalleled meteorological genius! For what other man can command the elements as I do? What other man can barrage you with a deadly shower of hail?” In story terms it’s a foolish boast in the presence of Thor, but it’s also simplistic rather than simple. Busiek also follows the expository dialogue of the era to maintain authenticity, but in 2001 it drags the story down further.

Despite the (deliberately) feeble villain being Busiek’s creation, he’s inserted into what’s a parade of Thor plot elements repeated throughout the 1960s. We have the simpering Jane Foster, Odin’s rage at Thor saving a human life in preference to seeing off a troll invasion in Asgard, Loki’s conniving all too easily deceiving the allegedly all-knowing Odin… Perhaps many readers in 2001 were unfamiliar with the comics inspiring Godstorm, but would they have been impressed by these elements?

What would otherwise be a short graphic novel is barely padded out by the ten pages of an unconnected two chapter ‘Tales of Asgard’ piece from the 1980s. It’s of interest for being a stepping stone toward artist Mike Mignola developing his distinctive style. While his layouts remain Marvel format, his approach is changing, and his designs for the Trolls and particularly the Uru Monster point the way to Hellboy. Tom DeFalco’s script fills the pages, but lacks any great personality or surprises.