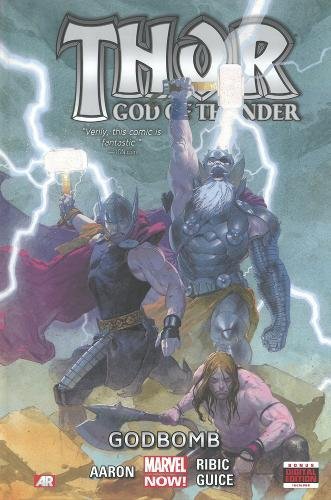 Credit to Jason Aaron and Esad Ribić for delivering something new and different. The God Butcher introduced Gorr, a being as old as the gods themselves with a lifelong mission to wipe them all out. Before meeting Thor for the first time he’d been relatively successful, Thor being the first to survive his attentions, and Gorr is presented as a threat for the ages, Thor facing him three times during different eras of his life.

Godbomb opens with Butch Guice very nicely illustrating the events that formed Gorr three thousand years in the past. It’s difficult not to read it as a condemnation of perpetual faith in real world religions as Gorr’s life is defined by one tragedy after another on a harsh world, and when he points out the truth as he sees it his people turn on him. It’s powerful, but has to be taken with a pinch of salt as motivation propelling a millennia long mission, as does the chance acquisition enabling this mission. If the material were that powerful how did its original possessor fall so easily? Oh, and anyone of a mind to be offended by any parallel with real world religions should read to the end before making their mind up.

Aaron has already established a hallmark continued through his six years writing Thor, that of acknowledging what a long life Thor’s had, and will continue to have, and looking in on him during different stages of it. The young Thor believed he’d defeated the God Butcher, yet in actuality he’ll remain a threat long after everyone Thor knows on present day Earth has been dead for thousands of years. The older Thor was the least seen last time, but Aaron fleshes him out considerably, curmudgeonly old coot that he is, even acknowledging in-script that he’s not only taken Odin’s place, but inherited his contrary personality. It substitutes for Aaron continuing to steer clear of any other known faces except in cameo roles, with several appealing new characters introduced, simultaneously emphasising just how long the Asgardians live. They’ve been enslaved for nine hundred years for starters.

Possibly befitting glimpses of the gods, Ribić paints them all as if in a slight mist, distancing them, yet they’re classically sculpted and suitably powerful. He also picks up nicely on the visual cues he’s fed. The Space Sharks are a momentary entertainment, yet possess a real threat and make for a great image as per Ribić. He’s awesome on the finale, which requires sheer power on an incredible scale.

However, for all the good, Godbomb is deeply flawed. Aaron would have been better off avoiding any element of time travel as it undermines his efforts. Gorr has the means to travel through time, so why doesn’t he do what anyone else would do and rectify the tragedies of the past? Perhaps the idea is that he’s so single minded that he can’t see past his revenge plot and he’s going to follow it through come hell or high water. Fair enough. Then why doesn’t he just head back through time and kill the infant Thor? Indeed, why not the infant version of any other god that still needs crossed off his list? It would save a whole lot of effort on his part. Then there’s the matter of a death scene that also doesn’t stand up to much scrutiny. The bombast, bravery and action isn’t enough to fend off the enquiring mind.

To better appreciate Ribić, this is combined with The God Butcher as Thor God of Thunder Vol. 1, or alternatively as Thor by Jason Aaron: The Complete Collection Vol. 1. The Accursed is next.