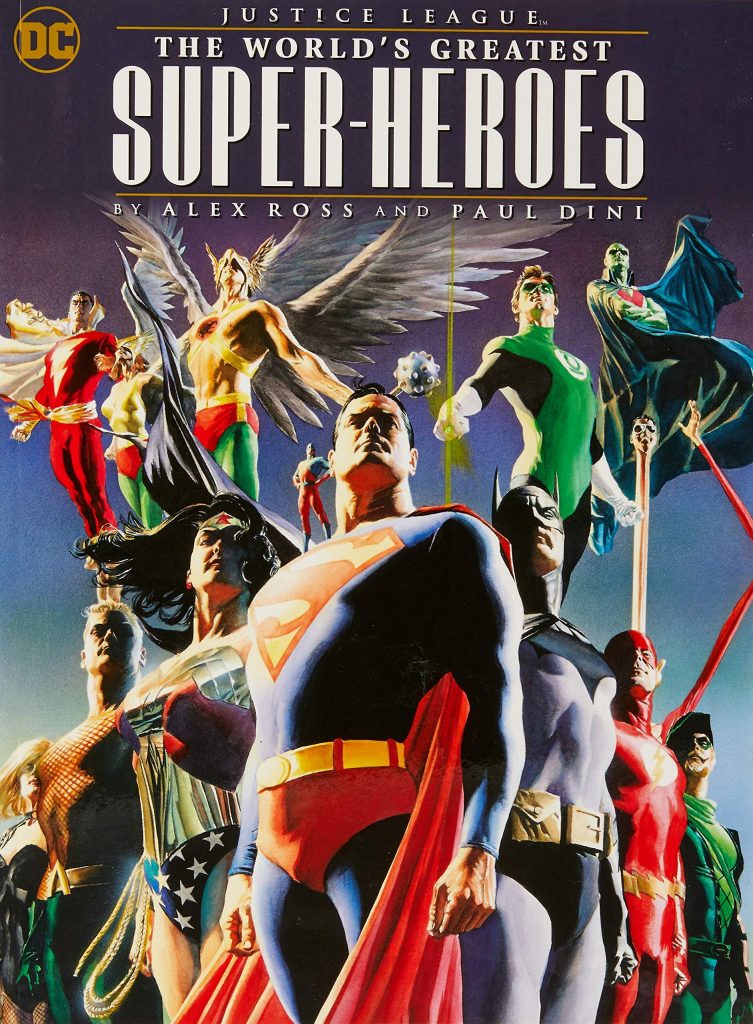 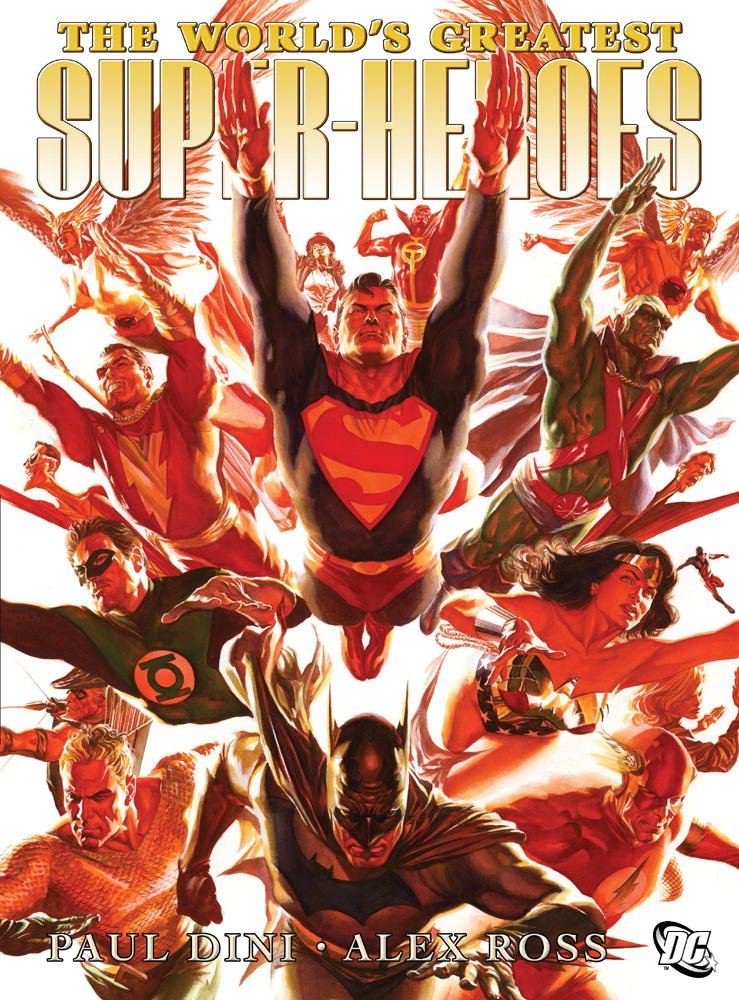 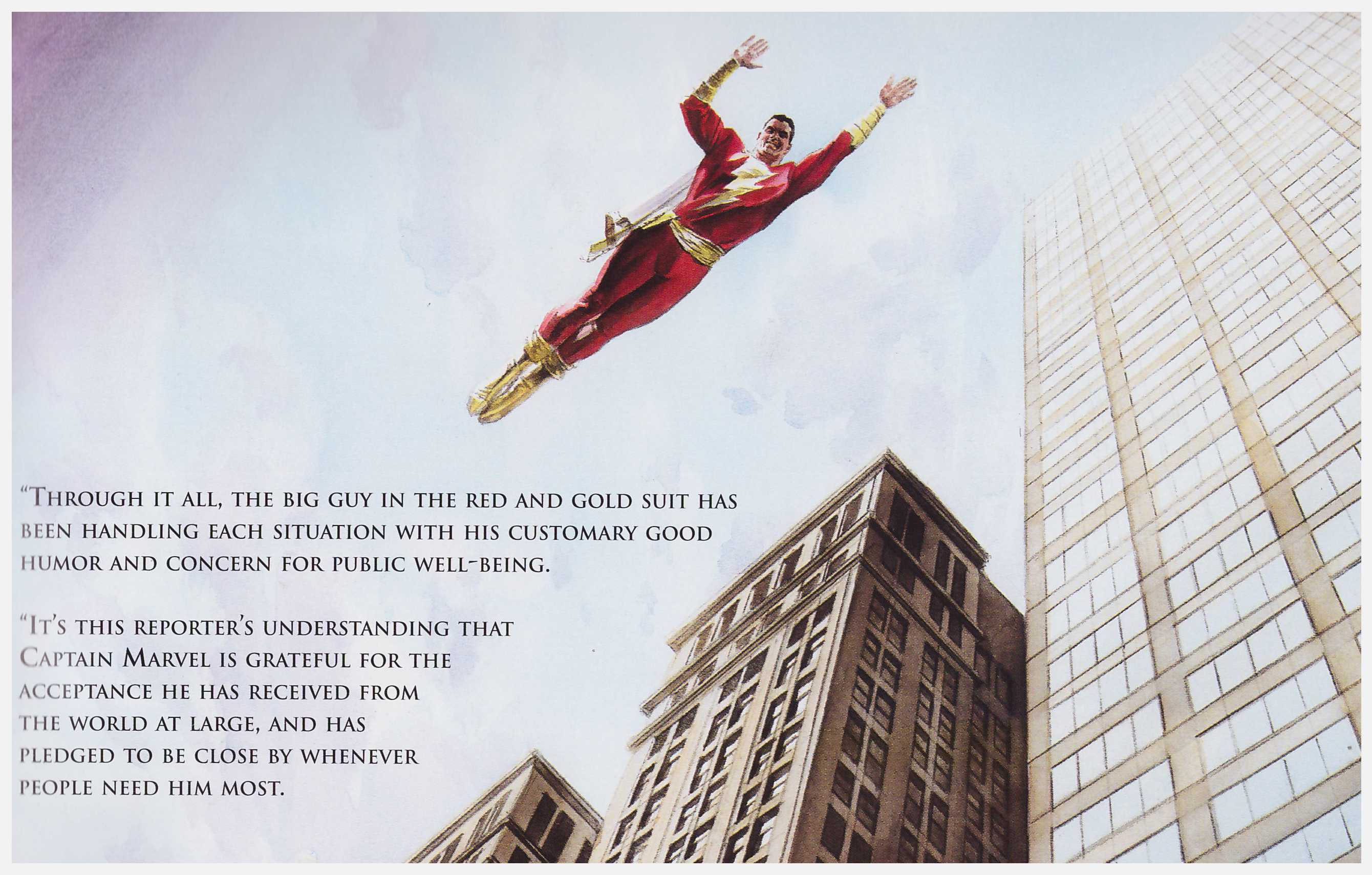 There are two options for buying this book. The first reproduces the pages at almost their originally published size of 13.5”x10”, and is a dust-jacketed hardback within a slipcase. The most recent edition reduces the art further to the standard trade paperback format.

This is mentioned up front, as World’s Greatest Superheroes is very much an artist’s book. In terms of graphic painted naturalism there has never been an artist working in American comics to match Alex Ross. He’s unique in consistently being able to apply that comforting Norman Rockwell style to superheroes, impressing them as larger than life in a manner few can via more traditional graphic storytelling methods.

This collects a series of comics he produced between 1998 and 2003, painted solo outings for Superman, Batman, Wonder Woman and Captain Marvel, DC’s four most iconic superheroes, then a succession of two page spreads detailing the origins of Justice League members. The book is completed by a Justice League adventure, the first here to use word balloons rather than narrative captions.

This is because the other tales are monologues conveying the thoughts and emotions of the spotlighted icons. They’re thematically unified by the heroes taking a tilt at real world problems, and along the way Paul Dini’s scripts offer some enlightening insight: Superman notes the convenience of Clark Kent’s shy personality in affording a quick escape if he’s needed elsewhere. No-one misses Kent.

Superman targets world hunger in an Eisner Award winning tale, Batman the causes of crime in deprived areas, and Wonder Woman entrenched persecution. Captain Marvel diverges slightly, with no attempted cure element involved in his interaction with sick children. This is a quite the sensitive path, but Dini’s scripts avoid trivialisation through the use of superheroes, and in every case entrenched politics trump costumes. Superman, of course, could impose his will, but that’s a dangerous precedent, and one addressed to some extent in the Justice League story.

It’s very admirable, but packaged together there’s a definite element of diminishing returns, making this a book to read over time rather than consume in a single sitting. Even so, the Justice League story is plain dull. The other material accentuates the astonishment of viewing superheroes, but this reduces it by pitting them against a microscopic alien virus with potentially deadly effects. It’s an interesting idea, but not one utilising Ross’ artistic strengths, even when fear escalates into worldwide civil unrest. There is a point to be made reflecting the other chapters, but it’s a very long time coming.

For those unable to see enough of Ross’ art, though, this will be irrelevant. We have page after page of gorgeously designed images, frequently dismissing panel borders for a greater panoramic effect and some astonishing compositions that reclaim the wonder of the superhero from the cinema screen. Ross is also singularly effective in distinguishing people, an accomplishment extended not just to different races, but to assorted nationalities. Photographic reference is an obvious aid, but it’s nonetheless a skill eluding many lauded artists. Ross further deserves considerable credit for donating much of his art to charities related to the issues investigated.

There are some nifty extras. The hardback comes with a beautifully illustrated dust jacket and slipcase, and both editions have a four page, double sided pullout offering two views of the Justice League. There are also lengthy individual interviews with the creators, primarily focussing on the Justice League origin spreads, and numerous examples of Ross’ preparatory work.