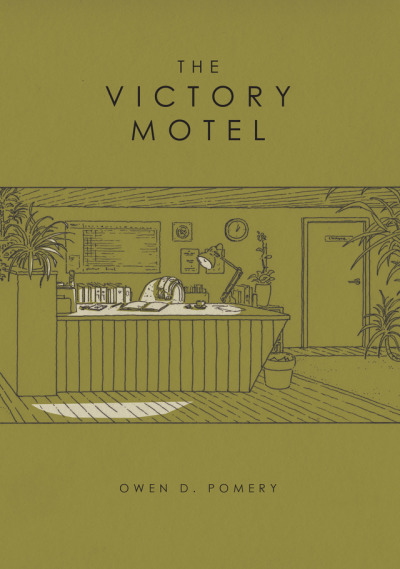 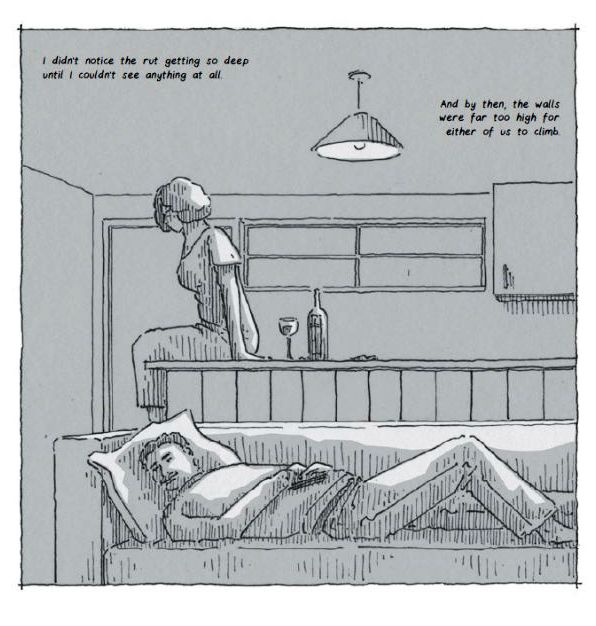 “To all who wander lost and take sick solace in the plight of others.”

Over the moor, on the main road not far from the coastal town of Victory Point lies The Victory Motel. Here one Friday the lives of eight people intersect. Their only reason for being there is needing a place to stay for the night, all on their way from one place to the next both figuratively and literally.

Owen D. Pomery is a creator that uses his architectural background to explore ideas and concepts within his stories. Every frame is precisely spaced, every line measured, each posture and movement exact while still containing an astounding depth of emotion. While his debut Between the Billboards explored the concept of loneliness and isolation in a modern context, The Victory Motel deals with the concept of narrative space. Blogger Melanie Phillips defines it as the complete depth and breadth of subject matter in which to define your story. Typically there is no complete story structure in mind. Rather the narrator is attracted to subject matter that may include setting, time period, dialogue snippets, personalities, activities and events, situations and anything else not inherently part of the argument of the narrative. In this case the Victory Motel is the setting, the Friday afternoon the time period. Pomery only ever gives his readers snippets of dialog, but it’s more than enough to give us an insight into the personalities on exhibit. Room 11 is the temporary home for a young woman about to start University. Her parents have moved away from the area so she lives and works at the motel, her first adult residence. She’s excited with the overconfident naivety of youth, believably irritating to the motel clients wearied by the reality of life. The two business men in Rooms 3 and 4 are driven by money, one arrogant and crass to the other’s discomfort at the nature of their work. Every person in every room is in a situation (dissatisfying career, a boring marriage) that is largely of their own making, engaged in activities (drinking wine, making origami, wild sex) not necessarily motivated by pleasure. A gamut of emotions occupies the page, Pomery’s style varying subtly or distinctly over a chapter. The man in Room 6 is half in the shadow half in the light, the couple in 9 more detailed with shading that accentuates weariness. One chapter is even more detailed conveying a sense of perfection while another chapter has a dark scratchy simplistic style. Some sequences looked posed, the sex more like a manual, but overall the art captures the mood in each situation, the use of black and white making it deeply engaging.

This is a very unusual graphic novel. There is no obvious end goal, yet Pomery succeeds in giving us a window into the complicated lives of 21st century humanity. The change of scenes without a clear conclusion is bewildering only because you aren’t sure how the author wants you to respond. Can you even respond? You want to intervene, to help them, snap them out of a spiral but you are powerless to do anything but observe. It’s an intriguing way to explore human nature, Pomery succeeding in a delivering a thoughtful, well illustrated and perplexing accurate observation of human behaviour. It won’t be to eveyone’s taste, but there are so many ideas to consider within the narrative space, so much to mull over. Preferably with a glass of wine.

The Victory Motel is a thinking person’s graphic novel, so unconventional Pomery self-published it. And still it is interesting, beautifully melancholic, philosophical, insightful and occasionally disturbing. Copies are available in select bookstores or directly from the author’s own website.