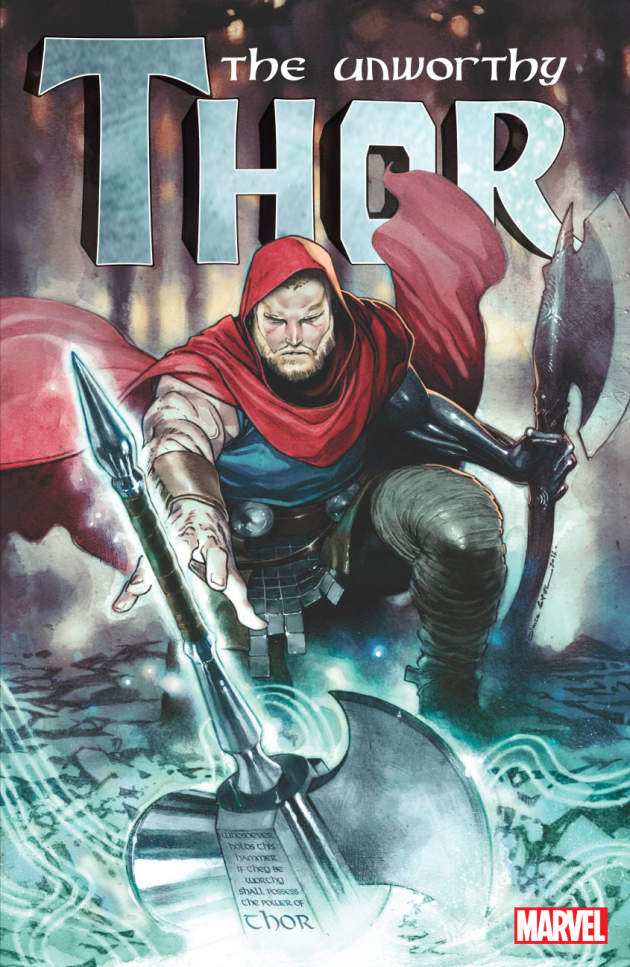 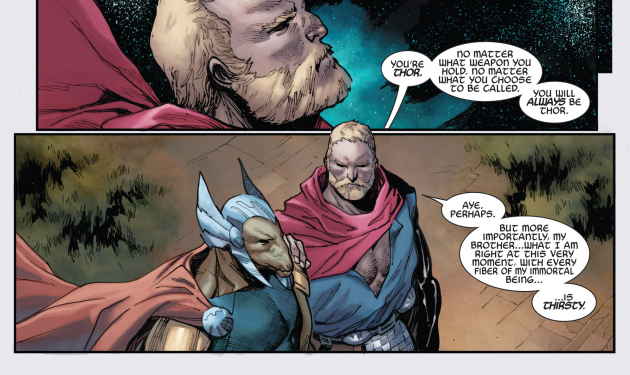 Jason Aaron continues his run of Thor titles with The Unworthy Thor, which sheds light on Thor Odinson’s adventures while absent from the interdimensional mayhem of Aaron’s female led The Mighty Thor. After becoming unworthy, Thor Odinson loses his ability to lift his mystic hammer Mjolnir. In Thor: Goddess of Thunder, Odinson gives his name to the woman now wielding his hammer, as he believes he has become unworthy of everything; even his name. Following Aaron’s vernacular, the male Thor will be referred to as Odinson and the female one as Thor.

This volume gives us the first deep insights into the Odinson’s plight to be worthy. He has a truly human struggle with his inner demons and feelings of worthlessness as he continues “fighting and failing and fighting again”. The volume centres on Odinson’s attempt to locate and wield another Thor’s hammer from a different universe (Secret Wars: Thors) while trying to escape the prison of a classic baddie. Each of Aaron’s books have included numerous references and nods to other Thor series’ and characters. However, this one stands out as a clever amalgamation of each of his different takes on Thor, including seemingly forgotten ones like Thori the Hel Hound, who quickly steals the show.

Olivier Coipel and Kim Jacinto’s art pairs well with the strong storyline, bringing the Odinson’s dark inner turmoil to the coloured page and beautifully contrasting it with the bright zaps of lightning from the hammer(s). Matthew Wilson’s colouring and detailing allows for a seamless transition from different time periods and timelines. It is exciting to see a character, who himself feels defeated and worthless, visually portrayed in such a built and powerful manner.

The fifth chapter reveals the mystery surrounding Odinson’s unworthiness: Nick Fury’s whisper in 2014’s Original Sin that prevented Odinson from being able to pick up Mjolnir. This revelation brilliantly links all three of Aaron’s Thor titles by referencing his 2012 Thor: God of Thunder and rewarding his loyal readers. The reveal, which was just as anticipated as the female Thor’s identity, allows the reader to sympathise more with Odinson, but does not reveal any ways in which he could again become worthy. The relatability of the narrative lies in the Odinson’s struggle to prove himself to his friends, foes, and, most importantly, himself. In a show of resiliency, Odinson agrees to fight the good fight whether he is considered worthy or not.