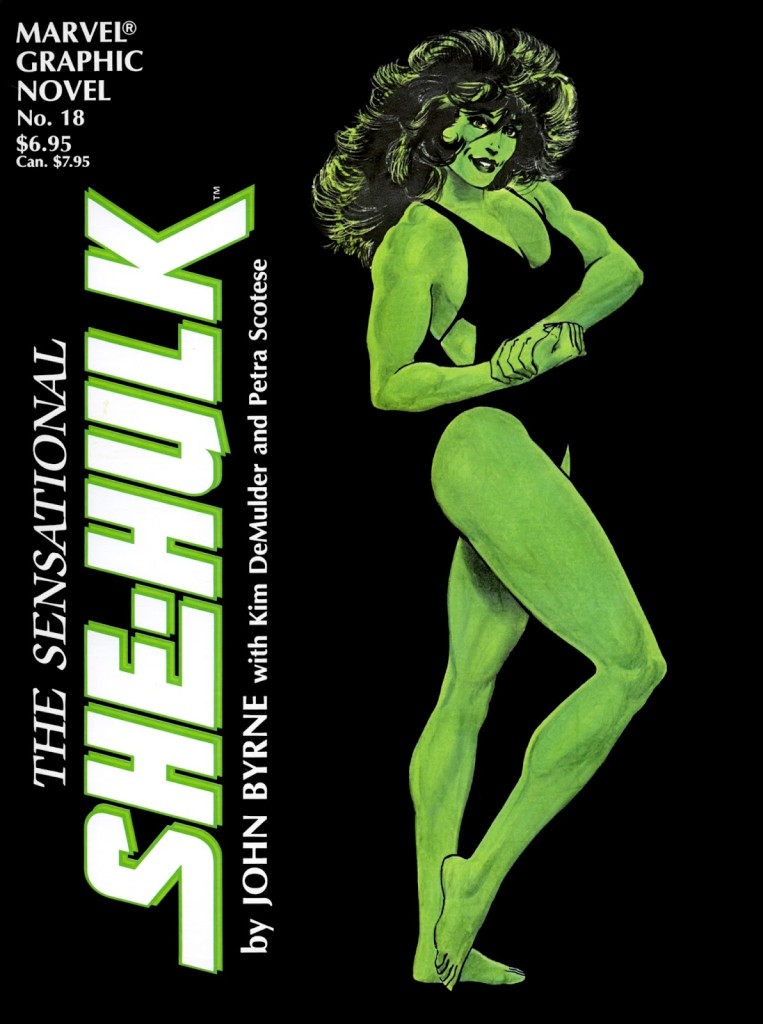 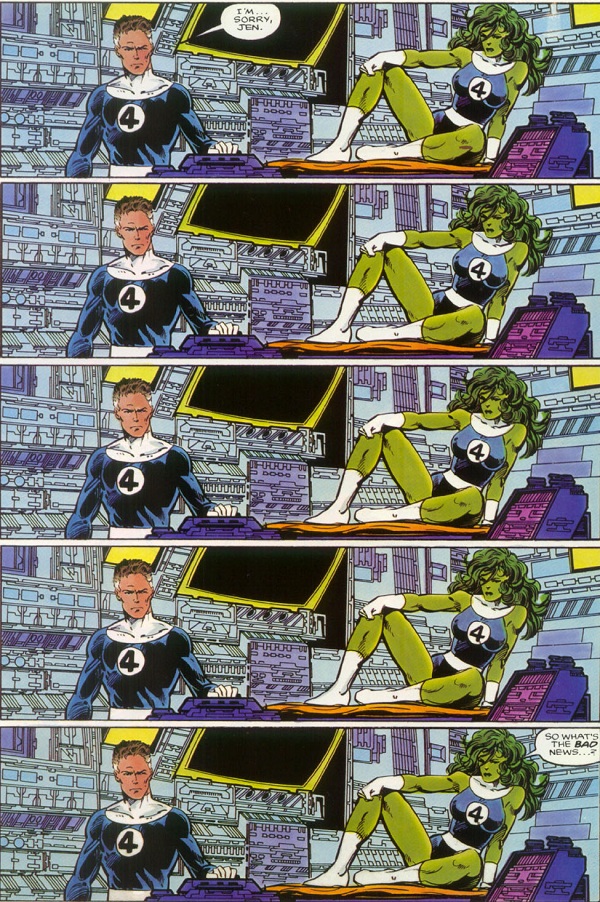 John Byrne’s first solo She-Hulk outing provides few hints of the way he’d later handle the character. She-Hulk had appeared in 1980 as star of a comic in which the creators didn’t seem very interested, before joining the Avengers, and then Byrne’s Fantastic Four in 1984. Byrne clearly saw something in the Hulk’s cousin, and it is to him that we largely owe the fun-loving Jen Walters that Shulkie fans have come to love. In 1989 he began writing and drawing a quirky fourth-wall breaking She-Hulk series, but in 1985 he produced a couple of rather more traditional pieces; first a She-Hulk focused story in Fantastic Four, and then this, part of Marvel’s Graphic Novels series. This presented comics in European-style album format, and was an odd mixture of material Marvel couldn’t have published anywhere else, and stories featuring their regular superhero cast. It showcased some very fine work, such as The Death of Captain Marvel and God Loves, Man Kills, but also presented material not much more than an over-extended annual.

That is rather the case here. The plot is ridiculous. S.H.I.E.L.D. abducts She-Hulk because… because… because something needs to drive the plot, and it gives the story an opening fight scene. After that it’s all over the place, with internal S.H.I.E.L.D. conspiracies and super-intelligent cockroach colonies – no really – and potential nuclear accidents. The whole thing seems contrived simply to remove She-Hulk’s ability to turn back into Jennifer Walters.

Along the way, there are many gratuitous excuses for She-Hulk to take her clothes off, and even a teeny bit of nudity. All of this is driven by a character clearly depicted as salacious and perverted, but Byrne does seem to be enjoying himself a bit too much (and setting up a gag to which he’d return in seven years). Given that, it seems odd that a final page showing She-Hulk and Wyatt Wingfoot post coitus was censored; clearly a bit of nudge-nudge-wink-wink show-us-your-tits nudity was okay, but actually showing that people had sex was too far.

However, for all the weaknesses of plot and cheesecake sexism, Byrne’s characterisation is rather fine, especially concerning She-Hulk herself and her tender, loving relationship with Wyatt. She’s refreshingly unbothered about discovering that she can’t change back to Jennifer, a strong contrast to the angst with which many characters (such as the Thing, for example) would greet such news.

Byrne’s artwork is also good, full of dynamic panel layouts and well-characterised faces. He was at the height of his artistic powers in 1985, and whilst unable to ink it himself (at the time he was writing, pencilling and inking two monthly titles, and writing a third), in Kim DeMulder he’s found an inker who is very sympathetic to his mid-eighties style. Petra Scotese colours with subtlety, avoiding the trap of becoming too garish, common to this format at the time.

That said, whilst it’s not bad, it’s by no means essential. The solo story from Fantastic Four is better, and probably a more accurate pointer to what Byrne would later do with the character. Since publication, this story has been largely forgotten, omitted from reprints of Byrne’s FF or She-Hulk work, and only appearing in the Women of Marvel omnibus, but in 2020 it was included in The Sensational She Hulk Omnibus.