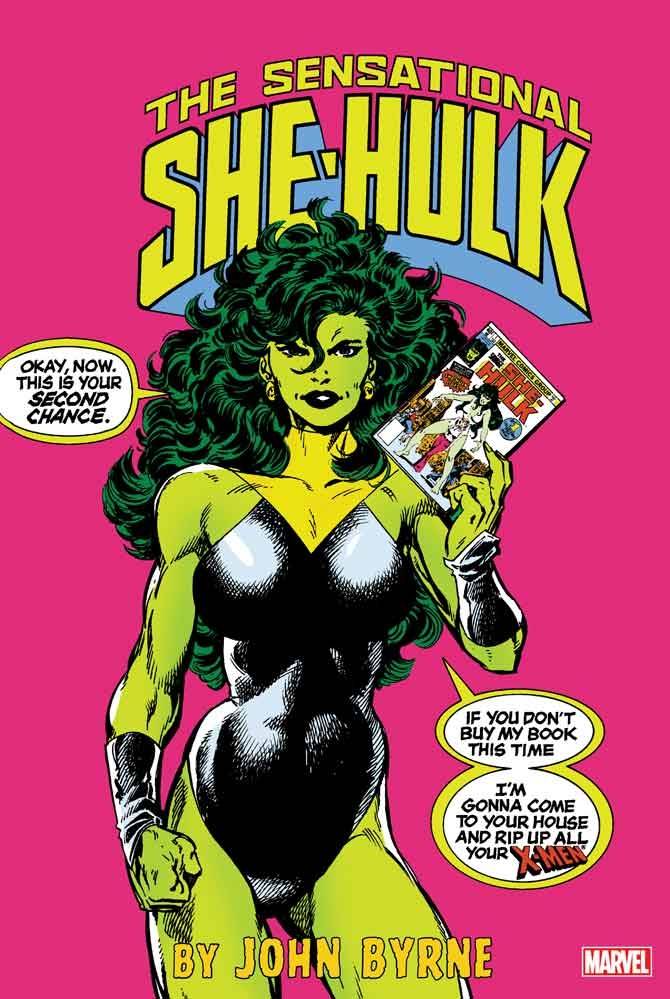 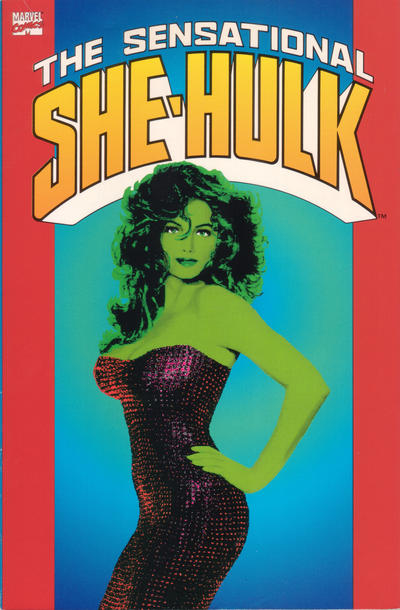 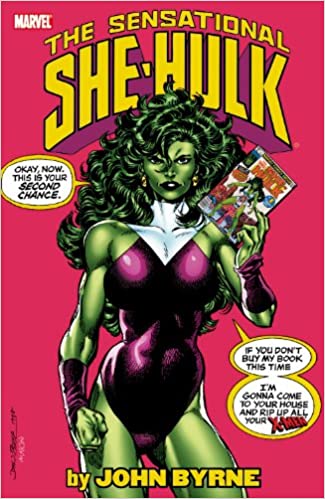 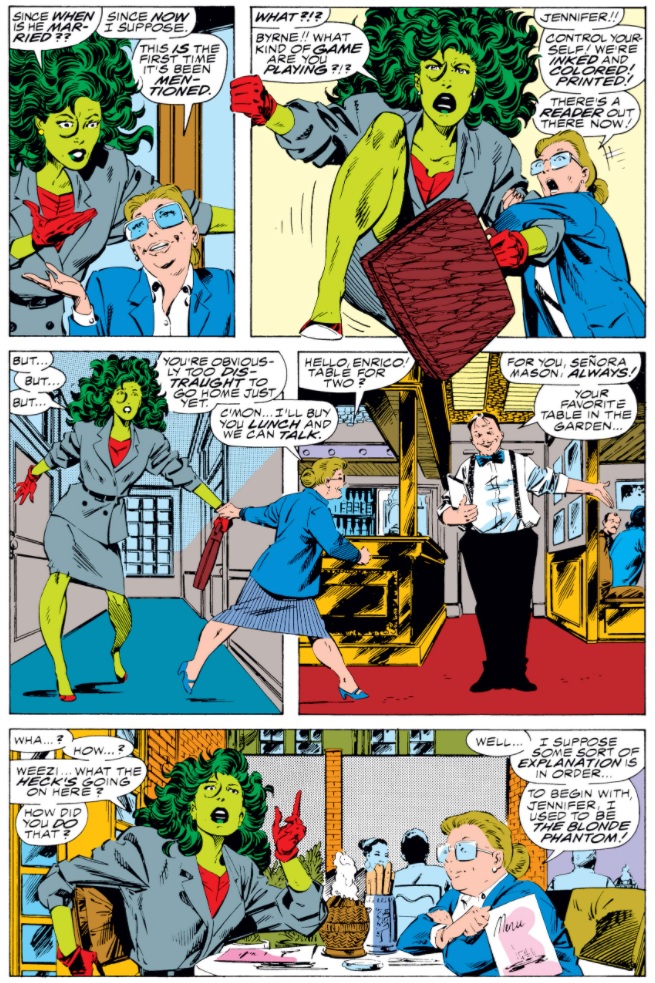 Jennifer Walters is a lawyer who just happens to be cousin to Bruce Banner, alter ego of the Incredible Hulk. Through a series of plot contrivances, related in flashback at the beginning of this volume, she received a blood transfusion from Bruce, and so became the She-Hulk. As the ‘Savage’ She-Hulk, she had her own series between 1980 and 1982. Those stories were dismal. Nevertheless, the character managed to pick up some fans, and rather than be wholly forgotten, she joined the Avengers shortly after her own title was cancelled.

Evidently, one of her fans was John Byrne. In the aftermath of the first Secret Wars, Byrne decided to refresh the Fantastic Four by taking a leaf out of Lee and Kirby’s book, and shaking up the membership. In this case, he replaced the Thing with the She-Hulk. Byrne’s She-Hulk was rather different from how she had been previously seen, this Jennifer Walters being far more at ease with her superheroic identity. All the angst that had marred her solo series was gone, and instead Byrne presented someone who enjoyed the superhero lifestyle, whilst taking it seriously (in fairness, Roger Stern’s She-Hulk in Avengers had been similar, though under-developed). Byrne had even given Jen a couple of extended stories, a solo tale in FF, and a Sensational She-Hulk graphic novel, in which he changed her epithet and made her permanently the She-Hulk.

Byrne and then She-Hulk left the Fantastic Four. In 1989, Byrne was invited to write a second solo series for the character, under clear instructions from senior Marvel editor Mark Gruenwald to do something ‘different’. Byrne certainly did that. Building off a story he had written for the Thing, where Ben Grimm had berated Byrne for stringing out a fight with a villain beyond what had actually happened, Byrne produced a fourth-wall breaking series. She-Hulk was well aware of being in a comic (see sample image), so Deadpool before there was Deadpool, if you will.

Byrne took great delight in bringing back some of Marvel’s less distinguished characters, including 1940s heroine the Blonde Phantom, Dr Bong from Steve Gerber’s Howard the Duck, and the cast of slot-truck racing tie-in title U.S. 1. None of these stories add up to much, but they’re not meant to. They’re silly, inconsequential bits of fluff; a breath of fresh air in the grittiness of post-Watchmen comics, suffused with quite a bit of energy. They’re certainly more enjoyable than Byrne’s later FF stories, or what he did with Superman.

The art is pretty much Byrne as you’d expect it. If you like Byrne, you’ll like this; if you don’t, you won’t. Bob Wiacek, who inks most of these stories, is sympathetic, and smoother than Byrne inking himself.

Unfortunately, internal Marvel politics killed Byrne’s first run, just as he was dropping hints that Lex Luthor was going to turn up. Byrne found his work being edited to conform with now largely forgotten series She-Hulk: Ceremony (only reprinted in Women of Marvel: Celebrating Seven Decades), and so Byrne left the series. He would return a couple of years later for the stories collected in Sensational She-Hulk by John Byrne: The Return. The original 1992 version of this volume omitted a brief introduction to the series that had appeared in Marvel Comics Presents, included in the 2011 reissue. All Byrne’s material has been more recently collected in The Sensational She-Hulk by John Byrne Omnibus. 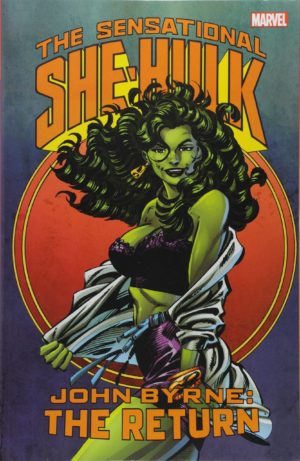 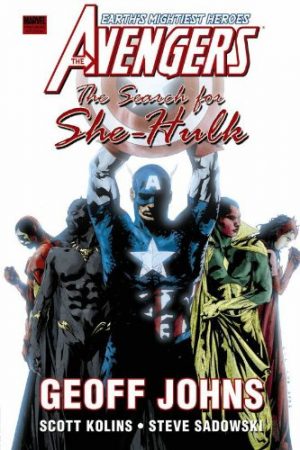