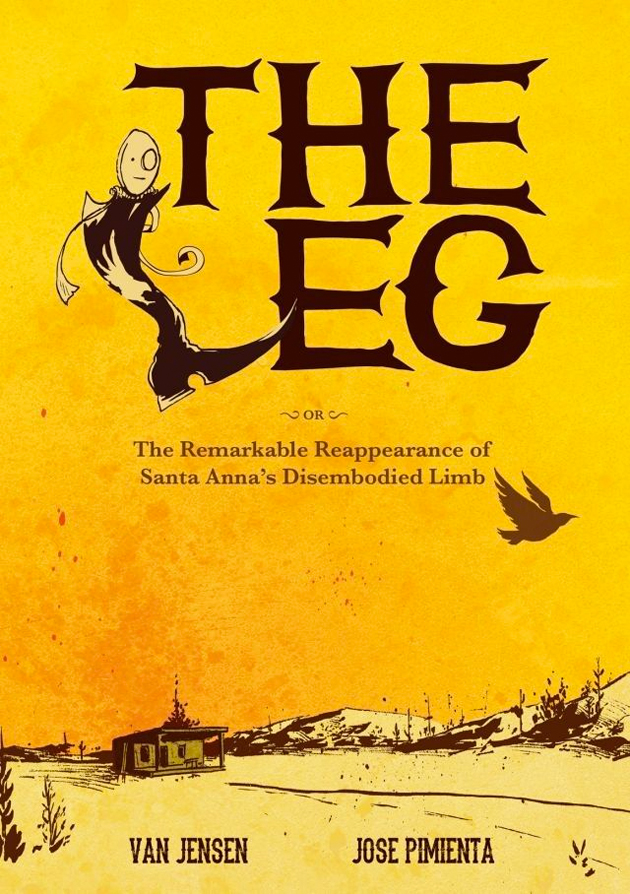 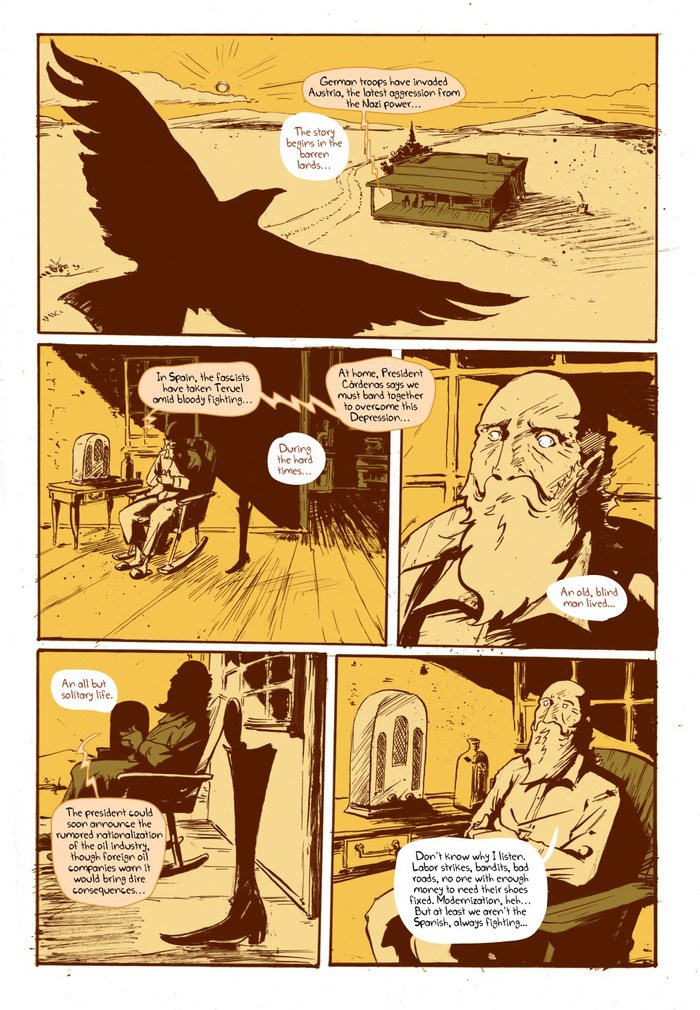 López de Santa Anna is a divisive figure in Mexican history, something addressed late in Van Jensen’s absurdist graphic novel. Liberator and man of destiny to some, Santa Anna was also the corrupt president who lost half of Mexico’s territory. His leg was amputated after a battle and ceremoniously buried. Later exhumed, its current whereabouts are unknown. It appears however, there was a time when Mexico was in great need when the leg reappeared. We learn that it spent most of the early 20th century in the company of cobbler, and when the cobbler was murdered in 1940 the leg decided righteous revenge was in order. Still housed within a magnificent stack-heeled, thigh length boot, it begins to hop northward.

As narrated by a crow, this is part absurdist fantasy, part mythical fable, and part exploration of Mexico. In the manner of many myths, Jensen lets an eccentric premise wander where it may, which makes for a very discursive and disjointed story. From early in its journey, the leg is accompanied by Ana, a child with a destiny of her own, as Jensen incorporates both historical figures known to be in Mexico in 1940 (Frida Kahlo, Diego Rivera, Leon Trotsky) and the far older native myths that shaped the people. The leg is again to be instrumental in the path Mexico will take as the President wrestles with a momentous decision.

Jose Pimienta brings Mexico to life, both urban and remote, in lovely sketchy art, scratching character and defining location, rendering parts of the story akin to a Spaghetti Western. A broad cinematic influence informs much of The Leg, most obviously during the action of the penultimate chapter, where continual visual cuts prove very effective. He’s also very decorative when it’s needed. Pimienta’s picture of a church sanctuary midway through would grace any urban sketchbook, as would his later depiction of the Presidential palace, and he’s equally ornate when illustrating the premises of a healer. He uses colour in a very interesting manner, darkish shades, but of bright colours, giving the entire story a warmth. Also, let’s not forget that one of his tasks is to make a severed leg coherent and sympathetic, which takes some considerable skill.

Jensen and Pimienta successfully infuse The Leg with the appeal of myth, rooting it strongly in Mexican culture and giving it a fairy tale feel, but it’s not a graphic novel for everyone. The magic realism enabling the narrative requires the reader to embrace it, and not everyone will want to. If you feel that’s appealing, jump right in, but otherwise avoid.