The Infinite Volume One 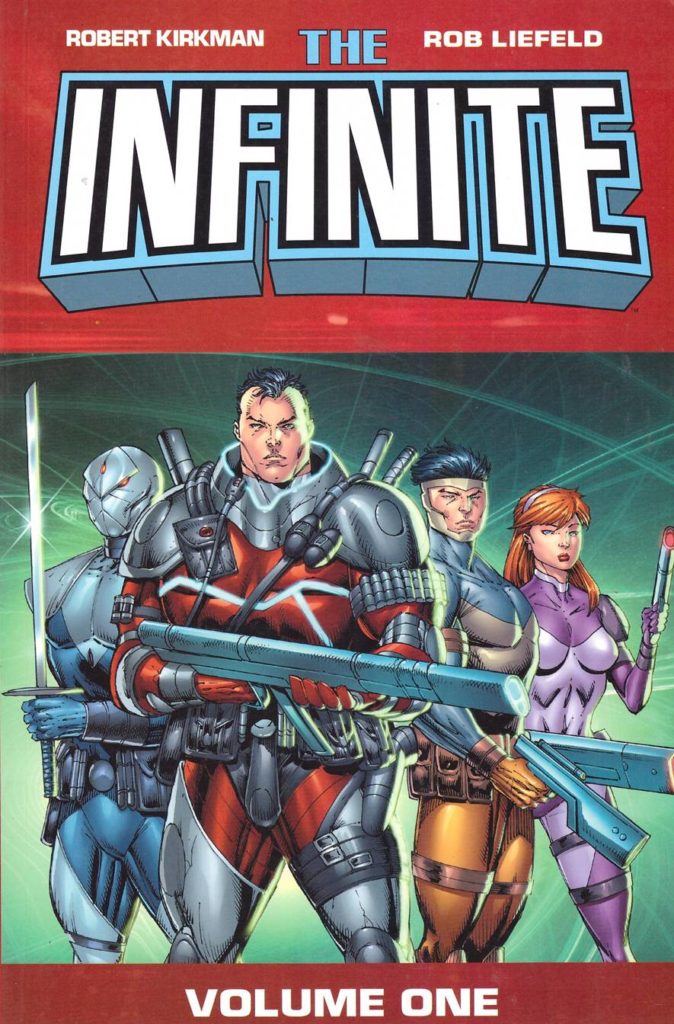 Has there ever been a more polarising figure in superhero comics than Rob Liefeld? Younger superhero readers loved his work in the 1990s, and even discounting the contribution of the era’s spurious investment boom, his comics sold phenomenally well. At the same time critics heaped derision on his basic drawing skills and lack of storytelling ability, but they generally failed to look past that, and so didn’t appreciate what the kids did: Liefeld’s incredibly fertile creative mind. He threw out character after character with something interesting about them, at least in a superhero context. He just couldn’t draw them very well, nor fit them into a coherent story. 25 years later, Robert Kirkman was at the top of his storytelling game, so would a combination be some form of latter day critical redemption for Liefeld?

Sadly not. He’s only credited for artistic duties, so his creative input is presumably limited to character and massive gun design, and while these pages show a greater appreciation of storytelling needs than those of his pomp, they’re unlikely to appeal to anyone other than his former fans. Backgrounds remain almost non-existent, figures are still distorted and characters still only have the single expression of gritted teeth in tiny mouths. If you loved that in 1995, will you still love it today?

Kirkman’s plot concerns one man’s desperate attempt to prevent his desolate future coming about, a future ruled by the Infinite, whose reign began with time travel technology. Bob recruits his younger self and his best buddy at a critical moment of their youth, both already having gone through army training, then trains them some more. Bob knows the Infinite began by infiltrating a US army base, so his plan is to prevent that. Kirkman toys with the intricate logic of time travel, but at a level designed to tease an audience, with questions asked, but never adequately answered. In the context of an ongoing series there would be no problems with that, but The Infinite didn’t survive beyond the four chapters here, creative differences apparently responsible. It leaves those unanswered questions as a frustration rather than a tease, and the whole project just hangs. If either creator could access a time travel machine would they persuade their younger counterpart never to begin?