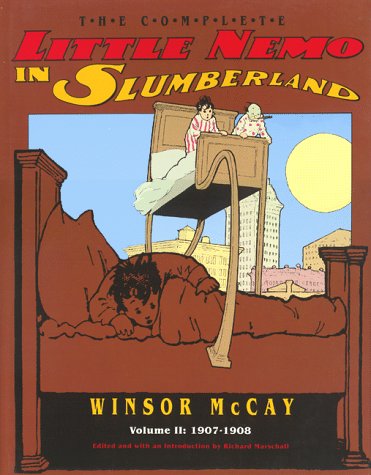 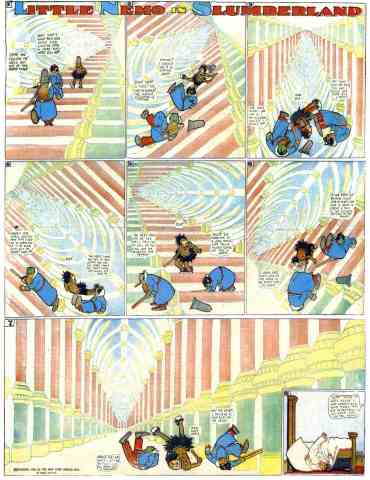 This second volume reprinting the classic Little Nemo strip covers a confident Winsor McCay having established his concept of Slumberland along with Nemo and the friends he’s made, and the formula. Every night when he dreams, Nemo has a visually stunning adventure with his friends from Slumberland, always ending with a small final panel of Nemo awakening in or near his bed back in reality.

So many pages considered prime representations of McCay’s skill, imagination and talent appear in this selection, among them the elephants on parade, the walking bed, the elongated faces and figures, and Nemo scrabbling over and between skyscrapers. Check them all via image search. It’s almost incomprehensible today to imagine how special it must have been every Sunday to open the newspaper and be blessed with such a perfectly executed decorative vision, this in an era when newspaper strips were still in their infancy. There’s a good case to be made for the sheer technical beauty never being equalled by any subsequent Sunday newspaper strip.

For all that, as Richard Marschall’s introduction spends time discussing, these pages also include a sequence far removed from the visual splendour associated with Little Nemo in Slumberland. Between late March 2008 and throughout April, Nemo visited Shanty Town, where there were no rich palaces or fine entertainment, Nemo drawing attention to the unfortunate circumstances in which so many Americans had to live. While McCay uses the backdrop for events just as fantastical as the remainder of the strip, it at least confronted readers with social injustice, although this wasn’t uncommon over the first half of the 20th century when newspaper strips were set in working class rather than middle class locations. For all his caring about that, by today’s standards a sequence near the start where Nemo visits a jungle kingdom is problematical regarding racial caricatures, and results in the permanent addition of what’s referred to as “a jungle imp” to Nemo’s Slumberland playmates. On the one hand McCay was featuring a black skinned kid every week, on the other he was a random generator of mischief above and beyond existing supporting character Flip, whose actions are more manipulative. There seems no great  maliciousness on McCay’s part, but the imp would feature from 1907 onward, without any sense of challenging the status quo either, seen as an uncontrollable child by the cast.

Compared with the opening volume of this Fantagraphics/Titan Books co-publication, even allowing for the books being issued in a pre-digital era, the production isn’t as refined. The colour is dulled in too many strips, there’s actually a fuzziness in the corners of some pages, and the photographing of original newspaper pages sometimes features seepage through of the previous page. On the other hand this remains the most authoritative presentation, and the oversized pages in hardcover still amaze.