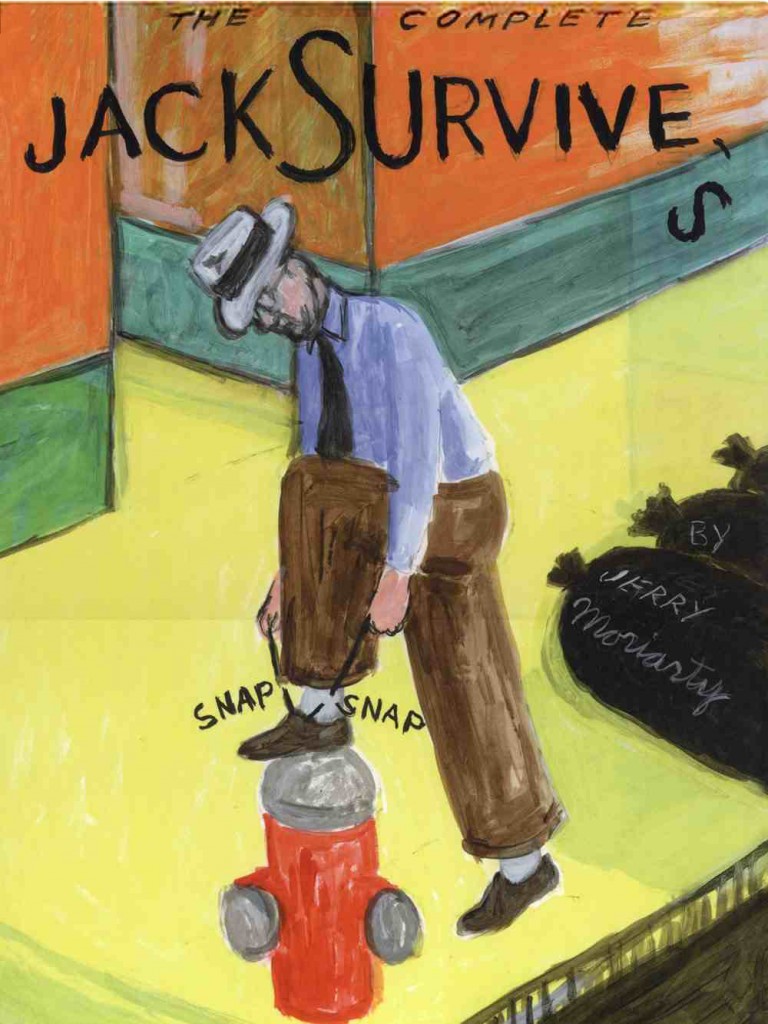 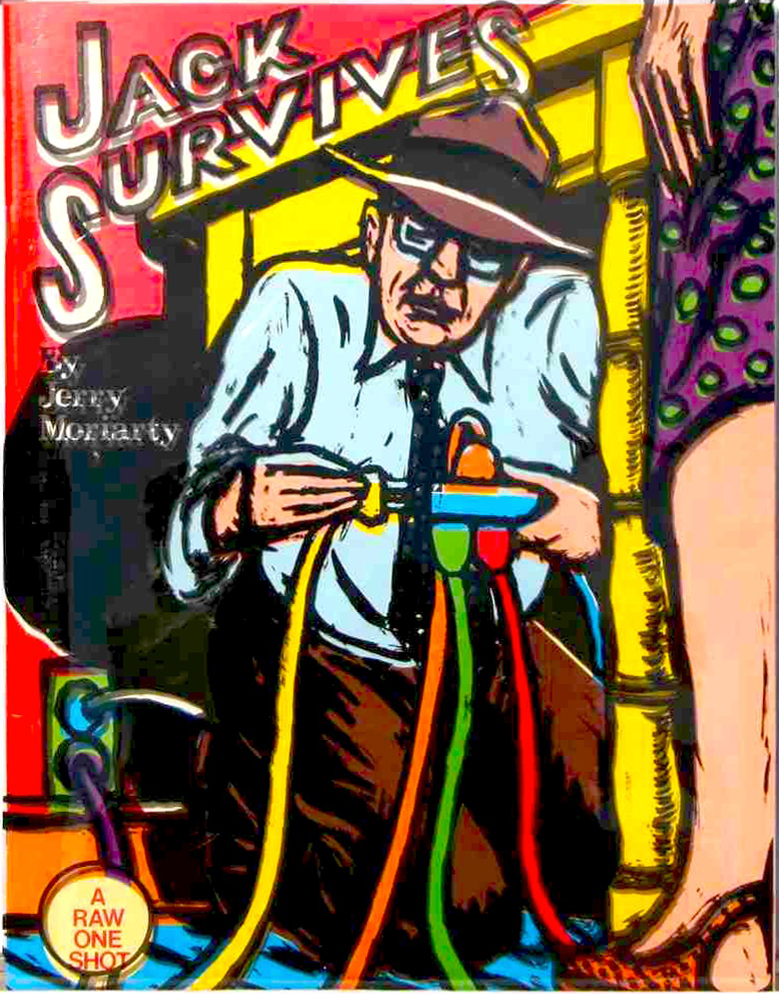 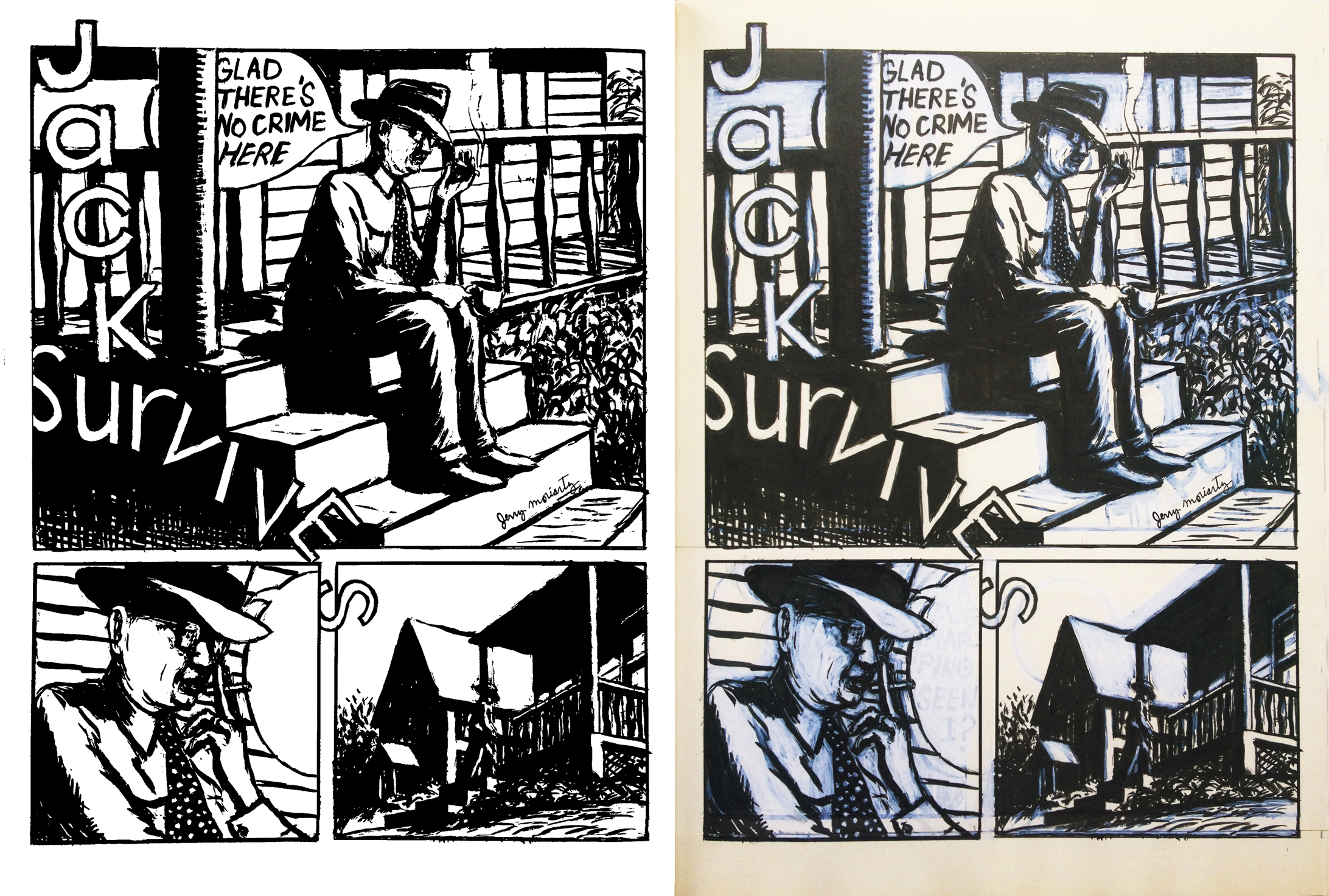 The Complete Jack Survives is a large format hardback, collecting strips by Jerry Moriarty, a painter and teacher at the School of Visual Art in New York. Most of the material first appeared in Raw magazine in the 1980s.

The strips are short, between one and four pages. Each is a simple episode from the daily life of an unremarkable middle-aged white suburban man, who is very content to be average and go about his business without attracting any attention. Jack, who survives the various small indignities, misunderstandings and inconveniences of a typical day, is based on Jerry Moriarty’s father. He died in his fifties, in 1953, and Moriarty draws him in that time period, the way that he was in those years; wearing a white shirt and a tie at all times, and almost always with his hat on. The six-panel pages are black and white lineart, pencilled sometimes with blue pencil and inked thickly with brush. The panels show evidence of being heavily worked and re-worked, with multiple levels of black and white paint allowing ghost impressions of previous drawings to show through. Moriarty’s drawing is so generic that it passes out the other side and becomes very specific, and the combination of simple stories – Jack tries to order a drink in a bar, Jack looks at clouds and sees shapes in them, Jack’s tie is bitten by a dog – with these thickly textured panels is dreamlike. These pages have the same qualities seen in the work of Edward Hopper or David Lynch, although without the twisted subtexts.

The first version of this book was a ‘Raw One Shot’ in 1984, printed in flat, contrasting black and white. Few people reading this volume will have seen it, but there is a focus and directness in that version that is missing here. Whereas the original version simply presented large format comics, this version is more of an ‘Art of’ book. The colour reproduction of these pages, which are so layered and worked over, is undeniably gorgeous, allowing you to see the original art photographed as is, in blue, black, greys and whites drawing the eye in and around the layers of ink and paint. But there is a distracting quality to that detail which makes the artwork itself almost more important than its subject matter. It might have been better to choose a few strips for this treatment rather than present the whole volume this way, particularly as there are plenty of pencil drawings, unfinished sketches and paintings included which provide a good overview of Moriarty’s style.

The Complete Jack Survives has a short preface from Richard McGuire, author of Here, who was published alongside Moriarty in Raw, and an introduction by Jimmy Corrigan author Chris Ware making some huge claims for the status of this work. His hyperbole is way over the top, but it’s nice to see that level of enthusiasm. This is distinctive, important work that deserves to be seen. Moriarty applies a lot of his painterly sensibilities to comics and creates both a lovely meditation on the passage of time and an examination of how time works in comics, panel by panel. The strips are meant to be looked at over and over, and this collection gets better the longer you spend with it.