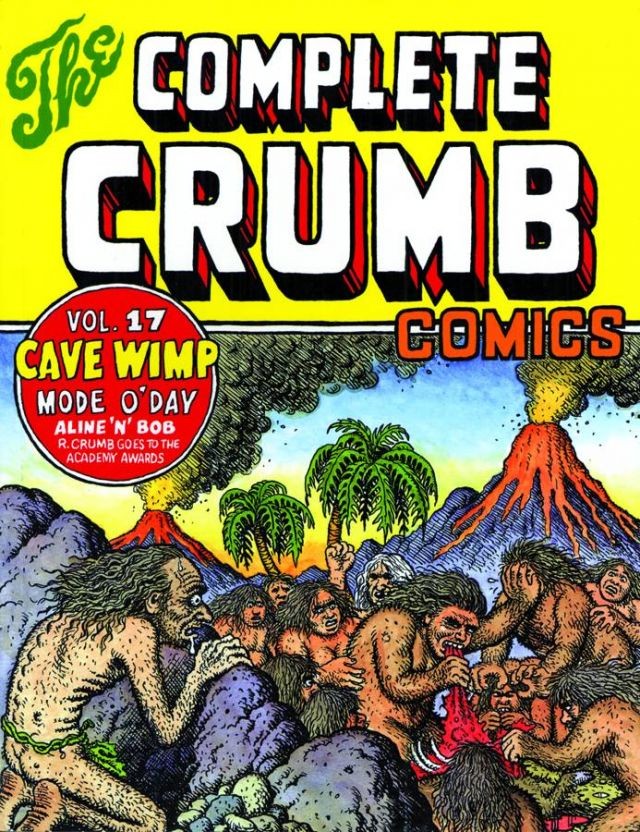 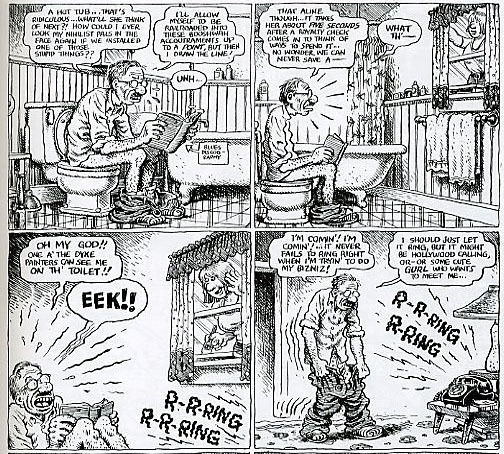 The final volume of Fantagraphics’ collection of the complete works of American comic artist Robert Crumb covers the years 1988-1992. Crumb is one of America’s great humorists (even though he moved to France in 1991). His work runs the gamut from Harvey Kurtzman-inspired Bigfoot cartooning in the 1960s, when he was one of the most acerbic commentators about the Underground scene, to painstakingly inked and finely detailed adaptations of old diaries and fairytales. He created numerous well-known characters for the undergrounds, including Fritz The Cat and Mr Natural, and founded Weirdo magazine, which gave many aspiring cartoonists encouragement and published a huge variety of material, from found art to the early efforts of noted cartoonists like Peter Bagge.

The lead feature in this final volume is ‘Cave Wimp’, drawn for one of the few remaining underground titles by the late 1980s, Zap. It’s a lengthy story in which Crumb frames the challenges and problems of being male in modern society in terms of being a caveman – in a primitive setting where brawn is necessary for survival, what purpose do creative, nerdy men serve? It’s a more thought-provoking story than Crumb’s earlier musing on gender politics. Crumb continues an occasional theme of drawn interviews and reportage with ‘The Ol’ Outsider Goes to the Academy Awards’, but his most intimate and engrossing work remains his no-nonsense chronicle of being a husband and father, partly drawn by his wife, Aline Kominsky-Crumb. ‘Our Lovely Home’ is a wry and charming story about family life.

There is other material from Weirdo which Kominksy-Crumb was editing at the time – including another not terribly funny satire on 1980s values featuring Mode O’Day – plus an enchanting portfolio of drawings of the village that became his new home in France, as well as a compendium of covers and illustrations from the period in the colour section. Now drawing more slowly, and seemingly spending longer on the ideas for strips, the first years of the 1990s proved fertile for Crumb. The one off stories in this collection, like ‘A Brief History of America’, are conceptually strong and well thought out, as well as being beautifully illustrated. Crumb’s mastery of a whole range of style, from stark brushwork to finely detailed drawings reminiscent of etchings, to airy, scratchy lined illustrative approaches, allowed him to give each story is own atmosphere and feel.

Crumb is an amazing illustrator with a far reaching imagination matched by his technical mastery of comic book art, able to summon up cosmic visions, and find the humour in his infant daughter answering the telephone. The Complete Crumb Comics Vol 17 gives an insight into his wide-ranging talent.