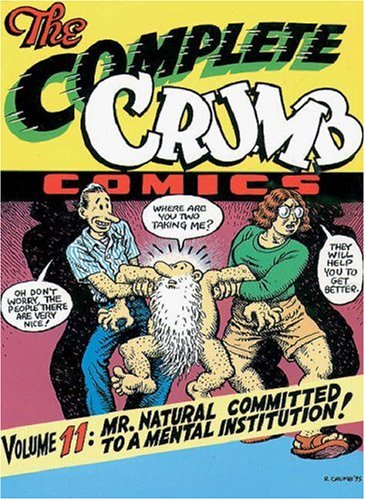 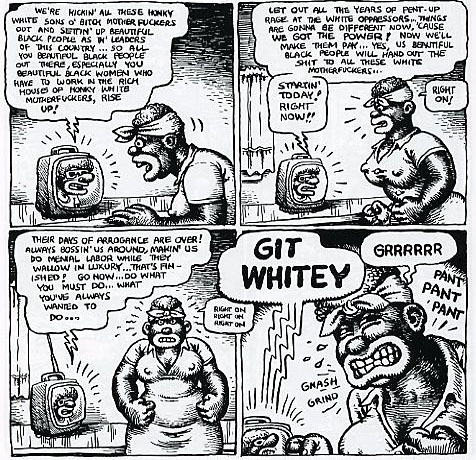 Robert Crumb is one of America’s finest cartoonists, and Fantagraphics’ seventeen volume collection of his life’s work, from his unpublished early sketchbooks onwards, is a real treat for students of the genre. It chronicles his rise to fame as a precocious Underground cartoonist, his disaffection with his counter-culture roots and move towards more autobiographical material. Volume 11 takes us from late 1975 to early 1977, a period when Crumb lost a key case to retain copyright of his Keep on Truckin’ concept and was then investigated by the IRS, which cost him his house and life savings.

Some of these troubles are touched on in Dirty Laundry 2, the second volume of his collaborations with his soon to be wife, Aline Kominsky, in which each draws themselves in each panel where they interact and the whole panel when they are apart. Where their previous stories often had fanciful elements, these are much more down to earth. Confessional and very open about their very particular relationship and sexual fantasies, their collaboration, ironically titled ‘Krumb & Kominsky in Their Cute Lil’ Life’ sees them grow up, move to a new area away from old friends and hippy communes, and face the fact that the days of drugs and happenings are behind them and the material world is knocking on their door (with a tax demand). Kominsky’s cartooning is much more assured, but still retains its naive charm. As always, it gets the job done; some may think the lifework and proportion crude but it expresses and communicates what the author wants it to tell you, and that’s is really what good cartooning is all about.

The first part of this book is occupied by a weekly Mr Natural strip Crumb produced for the Village Voice to help pay his tax bill, in which Mr Natural gets a sidekick, Billy Bob, who’s trying to record his wisdom for posterity – the joke being, of course, that he has none to offer. However Crumb was never terribly satisfied with the strip and terminated it after a year, after which he retired the character for a long time. There is some extremely good drawing, and the occasional laugh, but by this time Mr Natural’s schtick  was starting to feel a little too extended.

During this period Crumb was still finding plenty to poke fun at in the dregs of the counter-culture, and the volatile Feminist movement. He is always drawn to say the unsayable, and introduced Mr Snoid, a deeply unlikable and usurious little man, to do just that. Several strips engage with the rising Black Power movement, like ‘Josephine the Cross-Eyed Quadroon in Shakin’ the Afri-Can’ whose title alone would have gotten some Liberals’ riled up back in 1976. As is often the case Crumb treads a fine line between parody, devilish incitement and indulging his personal fantasies, while having his black characters speak the sort of pidgin English found in Uncle Tom’s Cabin. However he uses the same slang in straightforward biographical stories with no humour intended, so it seems to be his particular representation of southern negro dialect.

There is a good chunk of premium material in Volume 11 if you like Crumb’s jam strips with Aline Kominsky. If you’re not a fan of Mr Natural it does feel like the nuggets are thin on the ground.