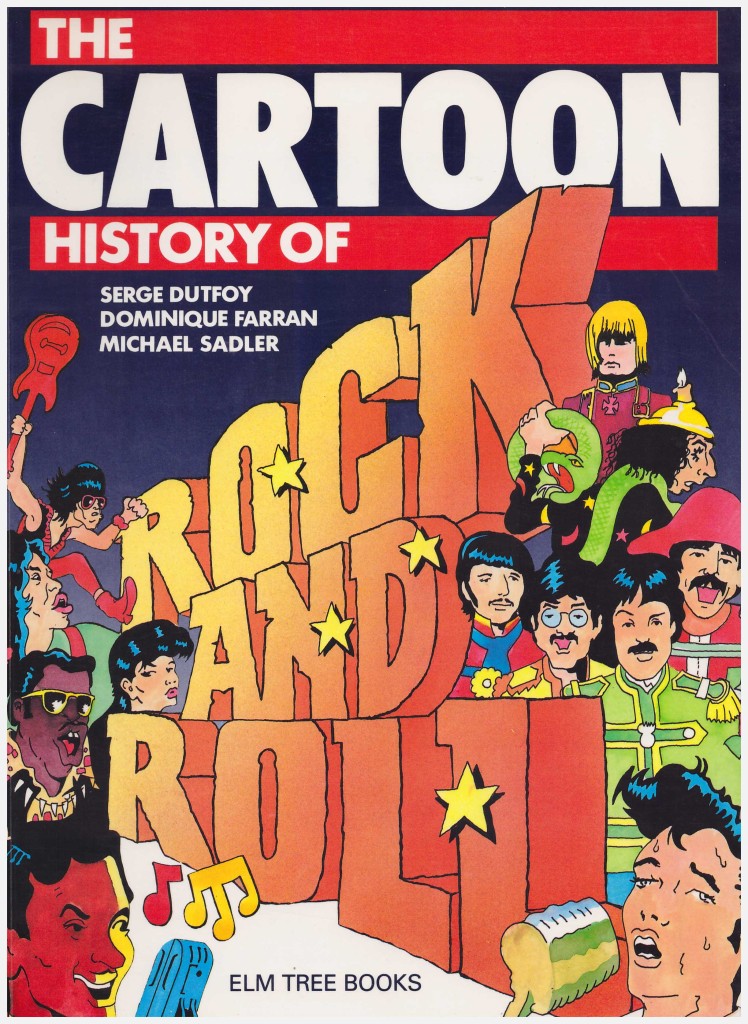 There is no connection with similarly titled works by Larry Gonick, but the Cartoon History of Rock’n’Roll shares an informative and iconoclastic approach to subject matter, and is equally impressive.

Starting with the sepia-tinted crooning era of the early 1950s Michael Sadler and Dominique Farran move forward to the earliest days of rock offering not just biographies of artists, but an investigation of their wider influence on mainstream culture. This is framed within the vibrant context of a bunch of cartoon cats putting together a book for a demanding publisher.

Lacking the benefit of contemporary interviews, it’s difficult to know how many of Serge Dutfoy’s startling visual interpretations are conceived by the writing team. Whoever’s responsible, the ideas abound. A page dedicated to Mick Jagger depicts him as Gulliver constrained by the Lilliputians and opposite we have British music’s invasion of the USA in the wake of the Beatles illustrated as the Bayeux Tapestry. The imaginative stunt of the Sex Pistols signing their contract in front of Buckingham Palace is punk Bash Street Kids on the rampage, and Elvis is the king on his throne, resplendent in pink with his manager skulking behind and a massive jar of peanut butter on a plinth to his left. Dutfoy’s likenesses aren’t always the most coherent, but they succeed where it counts. His overall style meshes the American underground cartooning – he manages a decent Robert Crumb pastiche – with its later French counterpart, and there’s a gag density throughout.

Considering the authors have fewer than a hundred story pages at their disposal it’s a considerable achievement to have covered as much as they have. The title specifies rock and roll, yet their definition is a broad church that encompasses soul, disco, and folk, although for a book published in 1986 hip hop receives short shrift.

A narrative that’s been perpetuated from the start with the benefit of hindsight rather falls to pieces in the final pages as the authors have to make stabs at which artists may sustain a reputation. So turn the page from Prince, Madonna and Kate Bush and there are illustrations of Bronski Beat, Sade and Mari Wilson.

A decades long consignment to the mists of time is an unfair fate for what at the time was a constructively ambitious and imaginative graphic novel. It’s well deserving of another look. Used copies are cheap. Like music? Give it a punt.