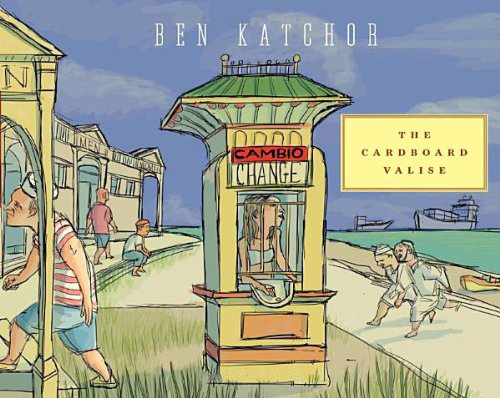 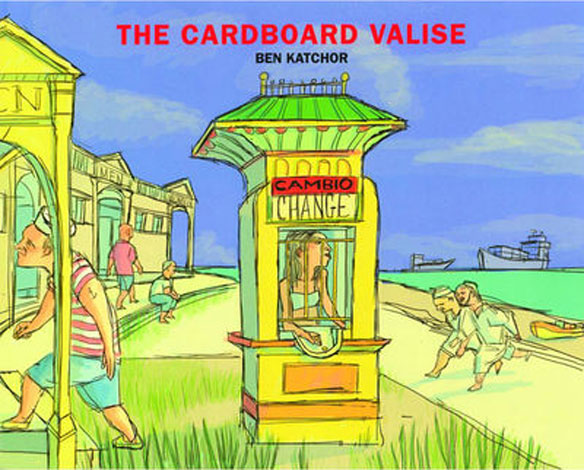 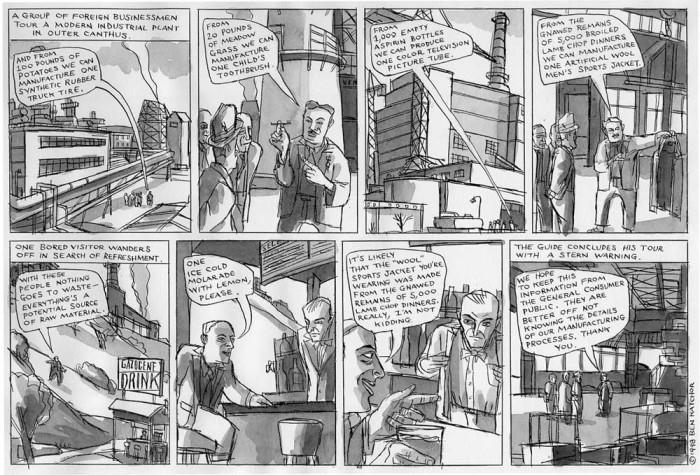 Ben Katchor’s surreal language games of bricolage and metonymy have moved on to the point where a mere city block or two can no longer contain him, and in The Cardboard Valise, his fifth book collection, he invents whole civilisations of outmoded traditions, ridiculous gimcracks and gee-gaws, strange foods and stranger recipes; far-away lands with exotic yet vaguely sarcastic names and provenances that survive on the curiosity of tourists jaded with ordinary travel destinations.

The valise of the title is, unsurprisingly, an outdated old-timey word for a suitcase, very cheaply made, and enormous enough that a desperate person could fill it with almost their entire possessions if they had to leave their lodgings in a hurry. Emile Delilah buys one of these prodigious containers and fills it with everything he owns for an extended holiday on Tensint Island. We aren’t there long before we visit the Hem of Marie in the People’s Republic of Outer Canthus. We have moved on from the areas wandered by Julius Knipl, Real Estate Photographer now and the protagonists of The Cardboard Valise are an eccentric bunch, all trying to reinvent themselves and their surroundings in some way. Eventually it becomes clear that there are connections forming into three distinct narrative strands, as Emile Delilah, Boral Rince, and Elijah Salamis, typical Katchor obsessives who feature in this new bunch of extended reveries, all live in the same building.

Much of the humour in these strips comes from the twisting of familiar things into logical but absurd new forms, but the accumulation of oddities does deliver its share of laugh out loud moments. Katchor draws the people and places of this book with an odd kind of very precise vagueness, his scratchy lines and washes giving everything a generic quality that helps to accentuate the theoretical nature of his musings on the human condition.

This collection approaches such extreme levels of abstraction at times that it’s occasionally quite demanding reading, and as such is possibly not the best choice for anyone who has never read a Katchor book before. However, readers of previous volumes will find a lot to enjoy here. Design-wise, Pantheon have once again added a little something extra to the hardcover presentation of these strips: there are fold-out cardboard handles on the inside front and back covers, making the book into its own valise.