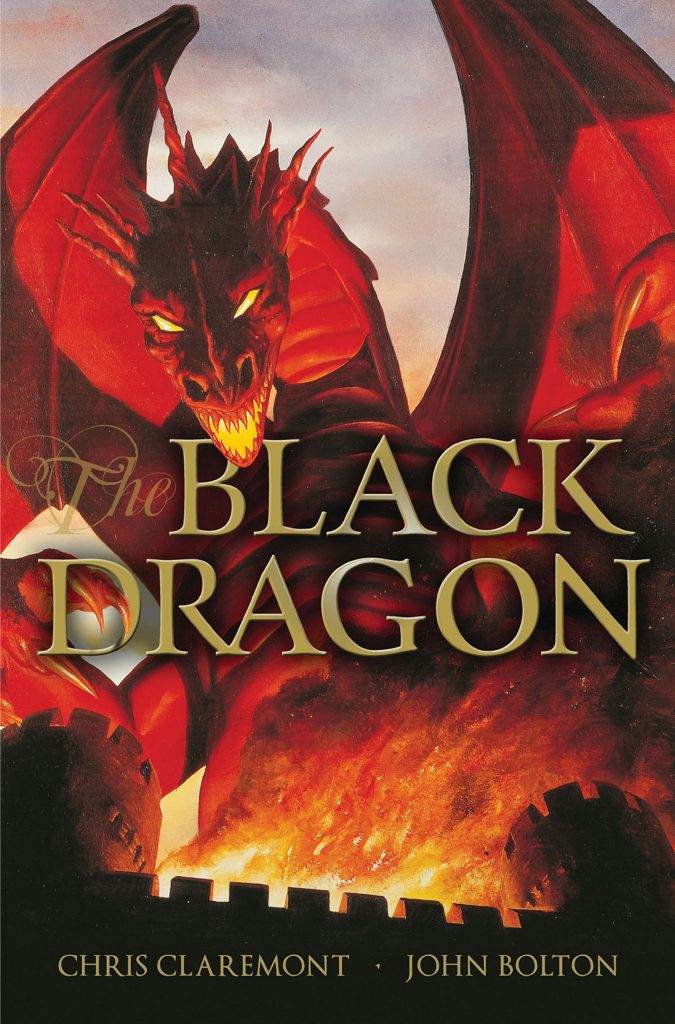 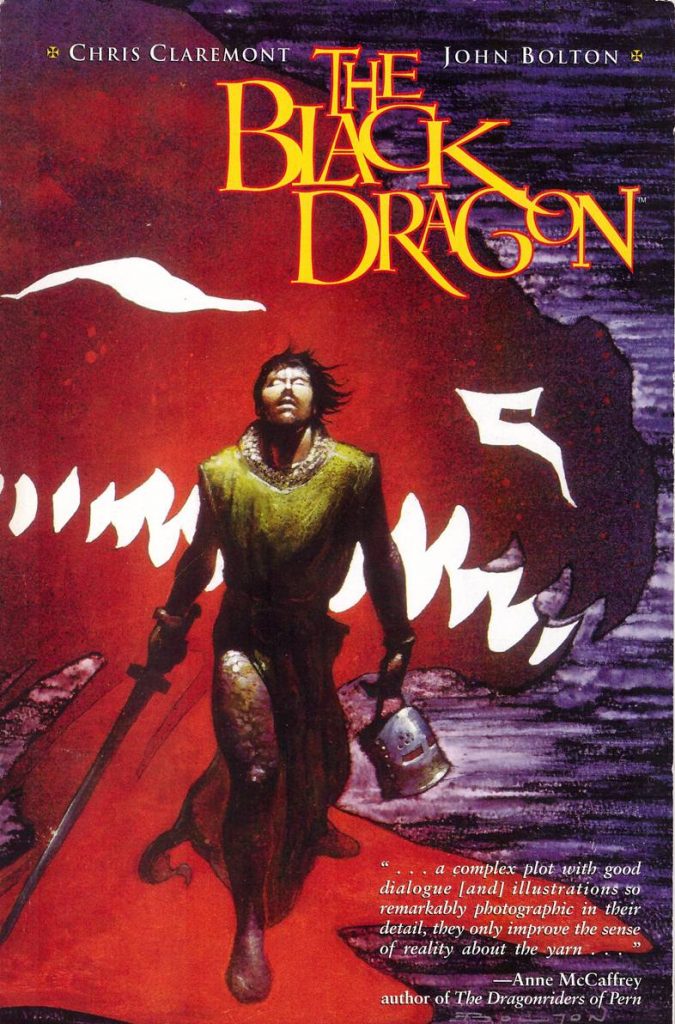 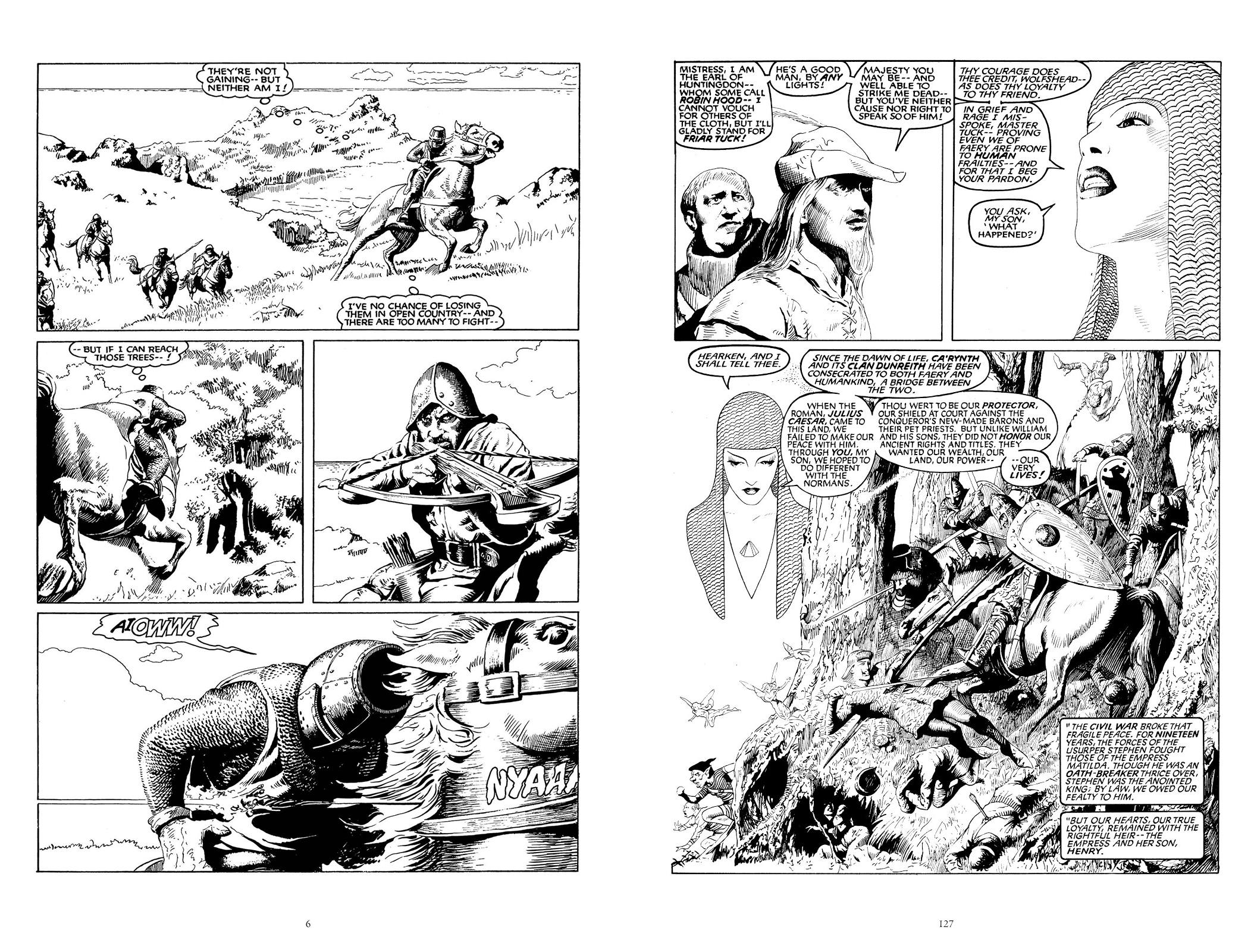 When originally published in 1985, The Black Dragon was a considerable departure for Chris Claremont, his success with X-Men meaning he was almost entirely associated with superheroes. Yet a storyteller is a storyteller, and with some reservations his medieval fantasy also hits the spot.

Late in the 12th century James Dunreith returns to England on hearing of the death of the King who banished him, considering him a sorcerer undertaking the work of Satan. Dunreith’s return marks a personal transformation, and on promise of his lands being returned he undertakes a mission to infiltrate the camp of a former friend now suspected of treason. It’s a long journey with plenty of detours, one providing new companions along the way, and despite Dunreith being old by the standards of the era, it’s also a coming of age story as he discovers what’s always been within him.

Sword fights, and jousting are supplied, along with Robin Hood and his allies, faeries, and demons in what becomes a tale of lust for power opening a door that’ll be very difficult to close again. Claremont’s good with period detail and mood, the superstitions noted, but not exaggerated, so at heart this is a thrilling story. However, Claremont’s writing, so up to the minute in revealing the feelings of his characters in the 1980s hasn’t aged well. Although not entirely absent, thankfully there isn’t such a reliance on thought balloons as there is in his contemporary superhero work, but characters explain themselves too obviously, and too many scenes are driven by dialogue rather than plot. That dialogue is also troublesome. The rapid swerves between ye olde Englishe and almost contemporary conversations are intrusive, drawing attention when the attention ought to be elsewhere. It holds The Black Dragon back from achieving the period grandeur Claremont’s striving for.

That’s effortlessly achieved by artist John Bolton in what proved the longest work of his career, 182 pages of delicate beauty, better appreciated in black and white than the colour of the original serialisation. Fantasy novelist Anne McCaffrey’s introduction notes the care taken with drawing horses, a task approached with dread by many comic artists, and the sample page exemplifies that care along with his elegant sense of panel composition. One particularly good example is showing the power a castle instilled simply by it’s vast structure compared with the surrounding buildings, and Bolton varies the style, some other worldly scenes benefiting from simplicity. The second sample page contrasts that with a scene of knights that has the complexity of Pre-Raphaelite painting. A few squint faces occur, but Bolton’s art stands the test of time.

The Black Dragon builds toward a desperate ending, and it’s one that’s good and unpredictable, clawing back a fair amount for credit for a story that was starting to become bogged down, while Bolton gives the finale his all, designing a neat alternate dragon form. The end result is a conflicting story that could be better, but still has much to recommend it, more so for fantasy fans.

Why is the dragon prominently red on the cover? Buy John Bolton a whisky and he’ll surely tell you.